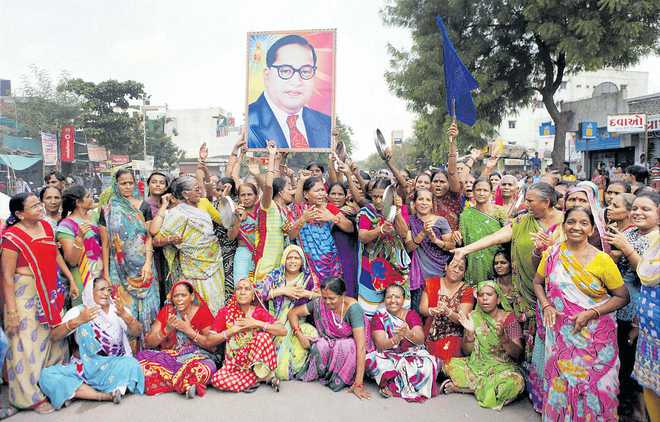 Even before I was born, in my house there were images of the Buddha and Dr Babasaheb Ambedkar. My grandmother, I vividly remember, used to light incense sticks and candles in front of their images in the early morning and late evening. She also used to attend daily prayers at the Buddha Vihara which was just a few meters from my home. She used to “worship” them. But the stories narrated at the daily congregation at the Vihara were of Ambedkar’s struggle and his quest for education.

During a child-naming ceremony at our basti, Bhim palana or Bhim’s cradle songs were sung to all us children. This was our lyrical introduction to Ambedkar. In singing the Bhim palanas, Ambedkar used to become a subject of music for us. All such cultural processes were led by women.

This is not just my story but one shared by millions of my generation who were born and raised in Vidarbha and other parts of Maharashtra. Women kept Ambedkar alive for us through songs and poems that we heard in childhood. As I grew up and started reading literature written by dalit women, I understood why they have made him the protagonist of their literature, why they have made him the foremost feminist in their lives.

In his succinct essay, Rise and Fall of Hindu Women, Ambedkar traces the fall of Hindu women to the period after the Manusmruti had been written. Decoding history with an anti-caste approach and the egalitarian agenda of the Buddha, he explains that Hindu women lost status due to the growing popularity of Buddhism. Buddhism offered women equality in the field of knowledge, equal treatment and the freedom to make independent life choices. These were not permitted to women in Brahmani dharma.

Manusmruti was written after the Mahaparinirvana of the Buddha. According to Ambedkar, who drew on references from Therigathas or the psalms of Buddhist female monks, this text was written in order to prohibit Hindu women from making their own choices. It sought to confine them to rigid brahmanical codes of conduct and pulled them away from a life of the mind, quelling their chances at individual liberation.

Even in his movement to emancipate society, Ambedkar enacted these Buddhist strategies and wanted dalit women to be the leaders of their own struggle. His candidly feminist approach was a revolutionary idea he derived from the stories of female Buddhist monks. Evidence of this exists in the form of narratives of dalit women leaders who worked with Ambedkar. Sample this: Mukta Sarvagod, one the earliest activists and writers from Ambedkar’s movement, recounts:

“In those days, there was a great awakening because of Babasaheb Ambedkar’s newspaper Bahiskrut Bharat, his satyagrahas, campaign tours and speeches. Girls had begun to take an interest in education. The names of women who had passed the vernacular examination and, who had become teachers etc., were on everyone’s lips.”1

Also read | Wamandada Kardak: Singing a casteless republic into being

Thus, Ambedkar helped bring the intellectual achievements of women into public imagination at a time when women were forced to remain indoors. During this period, women leading social agitations was a rare sight. But Ambedkar turned out to be a guiding light and force that propelled women. Due to him an “untouchable” woman, Shantabai Dani, became a MLC and led many agitations and committees populated by men. Dani, from Nashik, was a close associate of Ambedkar’s and a writer and social activist who rose to prominence. Her role in the agitation in support of landless people in Maharashtra is incomparable.

“We untouchables took every word of Babasaheb’s speeches as an inspiration. His words gave us identity, self-respect, independence and the strength to fight against injustice. We can say that his words shaped our minds and our personalities.”2

There are hundreds of dalit women from this period who had lived Ambedkar as a philosophy of liberation in their lives. Ambedkar appears in Savarna women’s narratives too, but inconsistently, and this has only started happening recently. Most of their earlier narratives have erased Ambedkar’s feminist strategies and approaches.

Even today, it is only dalit women whose narratives and literature can offer insights into the potential of Ambedkar as the foremost Indian feminist. As Gopal Guru says, this is because “social location, which determines the perception of reality is a major factor which makes the representation of dalit women’s issues by non-dalit women less valid and less authentic.”3

For the same reason, literature produced by dalit women demands special attention and a revolutionary perspective because it is essentially more diverse than Savarna women’s literature.

Around 1932, Ambedkar was carrying forward the legacy of Mahatma Phule who did the revolutionary act of opening schools for women in eighteenth century Maharashtra. In Ambedkar’s movement, substantial attention was given to education among women. To promote education among “untouchable” girls, some community associations set up scholarships and provided free schooling.4

For instance, the Somawanshi Mandal held a ceremony, attended by about 3,000 “untouchable” women, in which a scholarship of Rs. 10 was awarded to Mirabai Jadhav, a school student in Thane. Similarly in Satara, PN Rajbhoj declared that “untouchable” girls should be given scholarship, and those studying in board schools should get the facilities they needed.5 These efforts have been recorded by D.L. Kosare in Vidarbhateel Dalit Chalvalicha Itihas, published by Dnyandeep Prakashan, Nagpur in 1984.

Such major steps became responsible for making Ambedkar a feminist leader. Later, when writings by dalit women from Maharashtra emerged on the literary horizon, Ambedkar and his thoughts remained at their core. Their narratives were guided by the scientific approach spread by Babasaheb Ambedkar among the community. No autobiography by a dalit woman from Maharashtra has glorified gods or goddesses of the Hindu pantheon. Instead, they have launched scathing attacks on it. Ambedkar sparked among them the quest for scientific thinking.

In 1981, Kumud Pawade’s autobiography, Antyasphot, was published. By 1982-83, Shantabai Kamble’s Majhya Jalmachi Chittarkatha was periodicised. In 1987, Babytai Kamble’s Jina Amach was published. In the truest sense, dalit women’s writings started appear as a collective expression. Dalit women have published many remarkable books such as Mitlele Kawade by Mukta Sarvagod, Ratradin Amha by Shantabai Dani, Aiydan by Urmila Pawar, Majhi Mi by Yashodhara Gaikwad, Mi Nanda by Nanda Keshav Meshram, and many more. The wave of poets and writers then unleashed continues to rise unabated.

Ambedkar lives on in these books as the philosophy of liberation that informs the lived experience of their authors. These women have tasted the power of Ambedkar’s views on Buddhism and ideas about women’s liberation in caste society. Although their subject is the lives of its authors, their culture, their experiences, their tragedies and triumphs, at their epicentre is Ambedkar’s vision for the liberation of women.

It is the impact of Ambedkar’s movement on the minds of dalit women that those who were once enslaved by patriarchal-castiest brahminism started to demolish its narrative-body by writing their liberation in their own words. Dalit women writing their stories were doubly more liberating than dalit men writing.