The digital space is witnessing the creation of a new, shareable and performative language of protest. Over the years, social media has been used extensively to organise and demand action, and digital art seems to be providing this with a visual vocabulary. Technology that gets better and more sophisticated by the day has only helped to make this a more spontaneous way for protest artists. In India, protests against CAA-NRC-NPR triggered a sudden and fascinating rise in digital/graphic resistance artists, especially on Instagram. They’re fearless, and their art is hard-hitting and dynamic. As part of a new series, we spoke to a few of them to know what they thought of this emerging space.

MR: Digital resistance artists are almost creating a new, shareable language of protest on social media. In India, this saw a noticeable rise around the anti-CAA protests, when the work of digital artists was even carried on the streets. Why do you think this happened?

MP: I think a lot of people find it difficult to put their feelings into words or express things in simple ways. Similarly, many also find it hard visiting art galleries, even if the art there is supposedly representative of their feelings. Most of it is symbolic/abstract and not easily approachable by ordinary persons. On the other hand, the kind of digital art we see during protests is usually direct, easy to understand, relatable and relevant.

Most of us would remember artist Shepard Fairey’s “HOPE” poster designed for Barack Obama’s 2008 election campaign. It became an icon. Or the stylised poster by Artist Jim Fitzpatrick based on Alberto Korda’s photograph of Che Guevara. They’re not graphics alone, but were made out to be or considered iconic symbols of change. This is also probably why they gained immense popularity. The public hailed these as the voices of the common man and in some sense, came out of the surface of walls they were pasted on.

MR: Talking about a language of protest, illustrators have opined that their work on social media needs to be of a certain kind (visually pleasing, shareable, easily understandable because of minimised attention span etc). What’s your take?

MP: The answer to this is not very simple. I’m noticing varied kinds of artists participating in these unsaid online/offline protests. Some are old and experienced, have been speaking up throughout their lives and have a solid artistic background. On the other hand, a new breed of artists have also risen with almost no background in art but with a strong sense of self expression, and armed with digital tools that help them express what they want to.

As mentioned earlier, art has to connect with the masses and has to be relevant, but also, timeless. My work usually consists of direct responses to new situations, but at the same time, with historical and universal contexts in mind. It may look like easily consumable art but it is also like history being written in the form of icons and symbols. For me, art is all about expression and not about impression. You have to make best use of social media, whatever it offers — but one can’t be dependent on it.

MR: Does the fear of repression affect you? How do you manage? 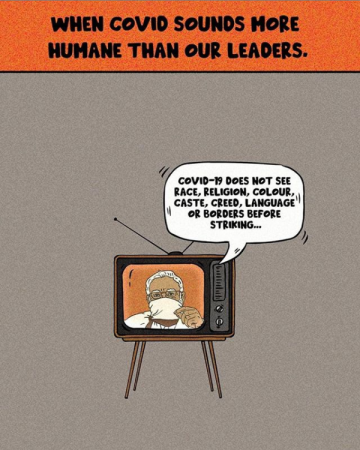 MP: It has always been a walk on thin wire for resistance artists. Arrests, violence and now, internet trolling. Definitely, the work reaches more people, but more people reach you too. Sometimes things can be really disturbing. People with no face abuse you, threaten you and can misuse your art against you. I was shocked to see some of my work on the Hate pages used for totally opposite purposes. More than fear, it is deeply unsettling. Earlier, I used to indulge in arguments and try explaining things — but it almost turned ugly when threats (sometimes FIR warnings by random people or associates of certain parties) started pouring into my inbox, so much so that I had to delete my account. But I got back immediately and started again. Now I just don’t indulge in unreasonable arguments and block abusive people. I am looking at a bigger picture instead of indulging in petty talks and retorts.

MR: Who all have been your inspirations?

MP: I have been inspired by all kinds of artists from musicians like Nina Simone to artists like Banksy, and writers like Bertolt Brecht and Eugène Ionesco. In India, we have so many brilliant contemporary artists like Orijit Sen. I love the way art is evolving here. Artists like Beeple Crap (Mike Winkelmann) have taken technology and digital art to new levels to express themselves and communicate to the masses. 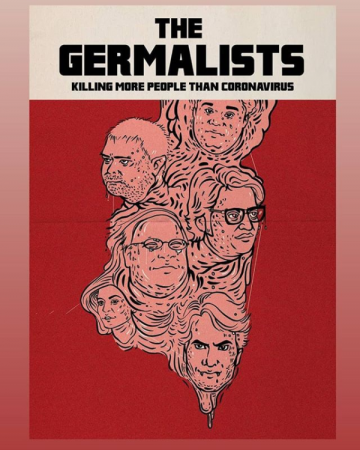 MR: Lastly, we’d love it if you could pick one image that you hold especially close to your heart from your entire repertoire so far and tell us why it is so.

MP: Usually, my personal art work revolves around very intimate and different subjects. But my resistance pieces serve another purpose with different expressions. I would like to pick this work, Civi(lie)sation: Man on Moon, Blood in Streets. It embodies a lot of what I want to say.

Every new invention and development humans call an upgrade to “civilisation”. But is that so? Every book we read, every art piece we absorb, was supposed to make us more empathetic.  But strangely enough, nothing has changed. Superficially, things may be more polished, words more exact, solutions time saving and reachable, but instinctively, we have not been able to bring sensitivity to the masses. “Not everyone is like that”, is a vague statement to make — it is vague to say only a few people are violent. When one shuts one’s eyes to brutality, they too are supporting and normalising it — this has even led to policemen hitting people having become just another thing. Laws have become a joke; people derive sadistic pleasure out of lynching; The Klu Klux Klan, Hitler, and Pol Pot still exist. Forget about cold blooded lock-up murders, even hitting people should have been a part of a dark history, and yet, they (vigilantes) can barge into our homes and roughen us up. You start doubting the education system itself. A riot in the national capital in this day and age, when every information gets captured, is a sad shock, and still, the accused get away. Judgement is given on the streets, in lock-ups and on news channels. 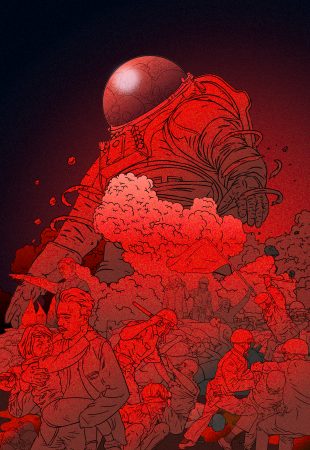 It is happening all over the world — there is a rise in fascism and people justifying it by believing that it is the only way to survive. Manipulative governments and corrupt bureaucrats are running the mad show.

This also reminds me of a quote by Isaac Asimov from his book Foundation: “The fall of the Empire, gentlemen, is a massive thing, however, and not easily fought. It is dictated by a rising bureaucracy, a receding initiative, a freezing of caste, a damming of curiosity — a hundred other factors. It has been going on, as I have said, for centuries, and it is too majestic and massive a movement to stop.”

The illustrations have been published here with the artist's consent.
Paule is an artist based in New Delhi. He runs 'Madpaule Diaries' on Instagram.
Mukulika R is a member of the Editorial Collective at Indian Cultural Forum, New Delhi.