From Mahars to Buddhists: The culture of protest 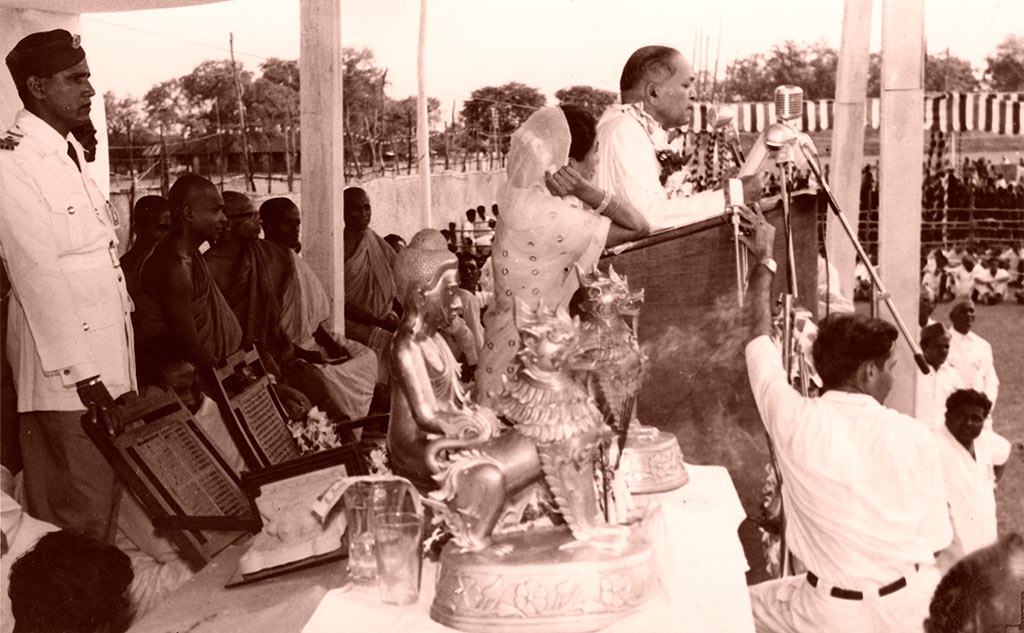 Much before the conversion of mahars into Buddhism in 1956, following the conversion of Babasaheb Amebedkar, a few mahars converted into other organised religions such as Islam and Christianity. However, their conversion into these two religions, did not have any substantial effect on the political nature of the Indian society or in the domain of dissent, though these conversions were significant as micro mutinies of the members of the erstwhile untouchable caste as well as a personal retaliation against caste-system. Even though those who converted into these religions were later subjected to caste-practices within these religions as well. They faced the same repulsive treatment from the “upper castes” of those religions. This is the framework of religious conversions in India in the 18th and 19th centuries within which the conversion of mahars led by Babasaheb ambedkar should be seen. This conversion itself was a revolution within, which was the only possible revolution in India a citizen could seek and possibly achieve.

But the path of revolution goes back to the “history of reading” of Babasaheb. Babasaheb had been well acquainted with Dohas of Kabir, as his father, Subhedar Ramji Sapkal, was a Kabirpanthi. Not only Kabir, Babasaheb was also familiar with the texts and stories from Ramayana and Mahabharata. Around the time of his matriculation, he went on to read a biography of the Buddha, which was written by his school teacher, Mr Keluskar. The reading of this biography offered young Babasaheb a completely unconventional imagination of the historical times of the Indian caste-society. It promised him the enthusiasm and logic that was needed to defeat the casteist mindset. He bombarded his father with several questions, after reading the biography of the Buddha, questioning the validity, morals, ethics and arguments presented in Ramayana and Mahabharata, and the justification of caste-hierarchies in it. His father did not have answers to such abruptly asked questions. But as a visionary, he could feel that a revolution has just begun because, now, someone was questioning the root of the problem of the society.

Later, as he grew up and returned to India after earning degrees from Columbia University and the London School of Economics and started establishing a connection with the masses. He began steadily and slowly but resolutely. He had also witnessed limitations of his earlier experiments to reform, to bring about change in the minds of caste hindus. According to Eleanor Zelliot,

Despite the repressive role attributed to Hindus, Ambedkar’s attitude toward Hinduism remained ambivalent for much of his life. In the early 1920s he participated in efforts at “Sanskritization” in which Untouchables imitated high caste religious ritual. But he soon found that the performance of Vedic style weddings, the donning of the sacred thread, and similar efforts to emulate upper caste ritual practice had little effect on the attitude of others. Such innovations were dropped in the 1930s. However, from 1927 to 1935 Ambedkar helped organize campaigns to force the opening of Hindu temples to Untouchables. This also proved to be ineffective and in 1935 Ambedkar decided to reject all claims to Hinduism and to convert to another religion.1

He was seeking a rational but compassionate, liberation of humans from the “caste” of the mind. He was seeking this liberation through various social actions, with huge mass mobilisation from Mahad (1927) to Kalaram Temple (1930-34). But he could barely see any change in the minds of the people as a society. He went into politics and despite a few failures in electoral politics, he managed to championed the case of untouchables and won several rights for them during the colonial rule. But he knew that the liberation he was seeking was way more serious and responsible than the Azaadi the other caste hindu leaders were seeking. Babasaheb knew that liberation was not mere physical, it is also metaphysical. He knew that hunger is not spiritual; it is essentially political. His firm conviction in the “life of the mind” and his emphasis on it throughout his struggle, gives us solid evidence that he was, after all, seeking to free the minds of people, seeking a teaching that must re-establish the human agency which was confiscated by the brahmanical dharma. Mere political reform, for him, would have been artificial. For social transformation and liberation in India, he was in search of a philosophy which was essentially anti-caste, but more importantly, which had no place for God in it. He was in search of a “religion” which was centered around human beings and drew from their rationality, logic and wisdom. Because, often through god, the existence of caste was justified, as he has demonstrated through his other writings. Gradually, his objectives to seek such a revolutionary teaching became lucidly convincing and logically profound. In 1936, when he publicly announced the decision to abandon Hinduism, and proclaimed that conversion was his choice. He said to the gathering of mahars:

Unlike a drop of water which submerges its existence with the ocean in which it is dropped, man does not lose his identity in the society in which he lives. The man’s life is independent. He is born not for the service of the society, but for the development of his self. For this reason alone, one man cannot make another a slave, in the developed countries. A religion in which the individual has no importance is not acceptable to me. Likewise, Hinduism does not recognise the importance of an individual, and hence it cannot be acceptable to me…………. Three factors are required for the uplift of an individual. They are: Sympathy, Equality, and Liberty. Can you say by experience that any of these factors exist for you in Hinduism?2

None of the mahars in attendance were in disagreement with what he said because their experience told them what he was speaking was validated by their everyday experiences. He was speaking to those who were made untouchables. They could see how the very existence of caste was fatal for human personality and thus for the entire humanity. But their brutal experiences in caste society wasn’t the only thing that led them to this realisation. They had songs, oral histories, stories and a few triumphs against caste in it, passed on from generation to generation, and most importantly, how they questioned and spoke against “caste”. Babasaheb found the blueprint of their lives in the theory of “broken man” and connected them with their earlier religion — Dhamma: Buddhism. He also distinguished between religion and dhamma. “A unique amalgam of Pradnya and Karuna is the Dhamma of the Buddha,”3 he said.

If Pradnya (wisdom) was what he sought in dhamma to live with dignity in a materialistic society, he was equally aware of the need to have a teaching of compassion in it. Both these factors are needed to shed self perception of being an untouchable in a caste society. The dhamma, Buddhism, offered both these teachings, for himself and for his people. Long before he appeared in social struggle as a leader, he developed a Buddhist outlook in his actions and writings. He skillfully used these teachings across his struggle. He fought the battle on these principles. “I feel free from hell,” he said after converting to Buddhism in 1956. Then he avowed publicly, “I believe that I am having a re-birth”. Both these statements were purely spiritual and told us of the intense feeling of emancipation after renouncing Hinduism publicly, and then embracing Buddhism in front of half a million people, mostly mahars.

Those who have converted to Buddhism now have their own culture, songs, literature and way of life which is anti-caste. Their words and music also aspire to annihilate caste. They become a potential mind that intends to annihilate-caste at various levels as per their capacities. If you have no experience of it, it would appear to be just another event to you. But if you are one of them, you are aware that it was no less than a revolution which no other leader in India, from Gandhi to Nehru, imagined for the people of this country. Because Buddhist conversion simply led them to practice rationality in the public domain in india. If we restrict ourselves to Maharashtra, the Dalit Panthers movement, Namaantar, Riddles Cha Morcha or any other protest led by mahars (now Buddhists), illuminate their philosophy ofstruggle and their quest for justice in personal and public life. Their actions are guided by the dhamma which emphasises on equality, liberty and fraternity. In a nutshell, their struggle seeking these, are beyond victory or defeat. Because they have annihilated the thought in their minds which made them feel untouchable. With conversion, they have reclaimed their humanity and wish to live with it all through their lives, axing the very root of problems in India: caste. It is very much like the current struggle against draconian laws and acts breaching basic human rights. With conversion they have declared a ceaseless war against tradition and mythology using which people draft and enact such laws and gives rise to a fascist generation which later choose one fascist among them as their leader. Babasaheb’s conversion to Buddhism left no scope for clinging to such traditions which may be responsible for the rise of fascist society among the converted. Because now they have Pradnya and Karuna in their lives. Their lives in themselves are a protest now. Sixty-four years back, they publicly rejected the religion which rejected them. Imagine, if a single community can do it, what if the majority of the Indians also did it? Of course it would take time to witness substantial changes, but it would certainly, if the conversion is thoughtful, annihilate the “caste” of mind, the sole reason for the rise of fascism in India.