No Climate Colonialism: Towards global justice 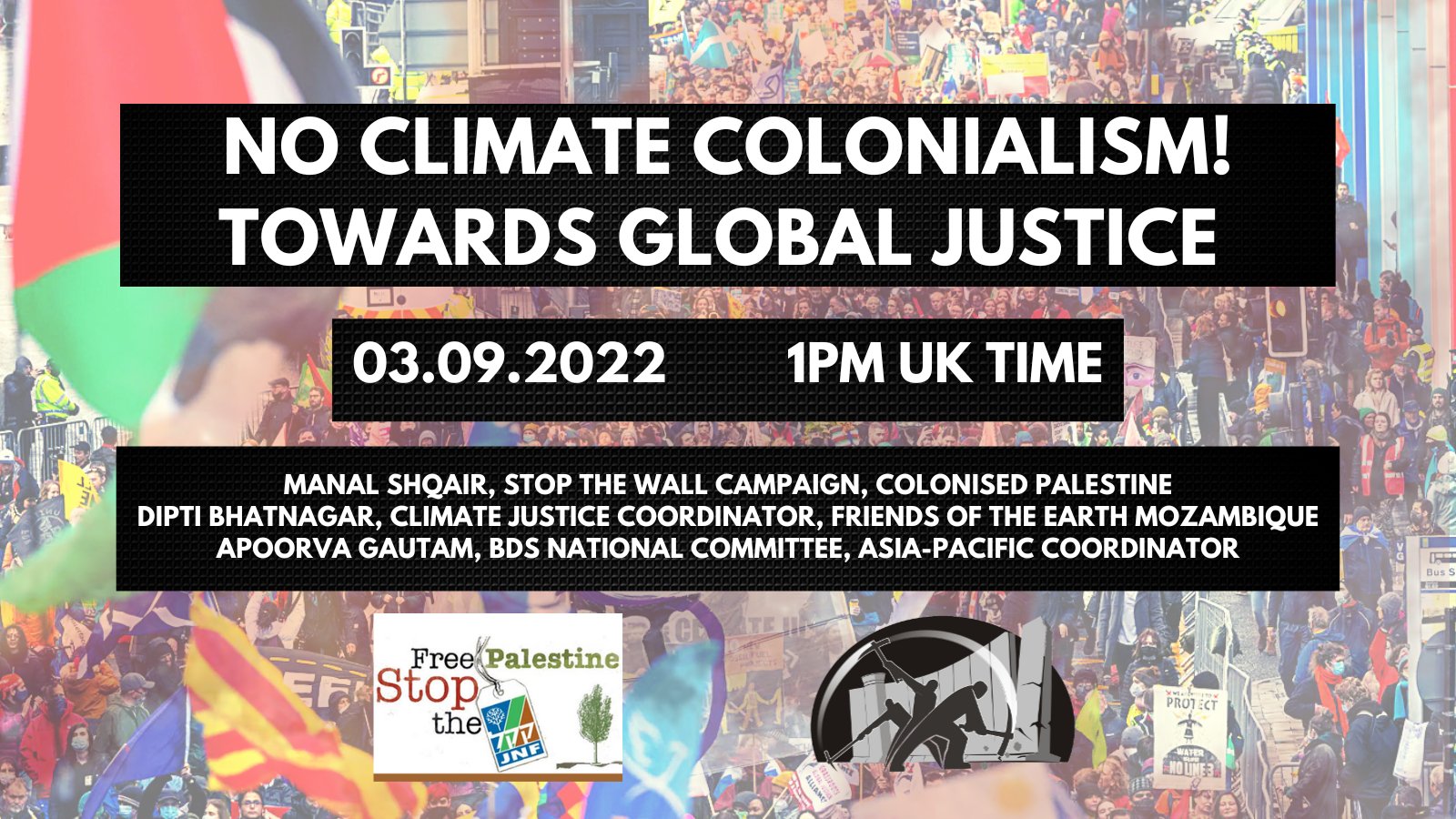 Ahead of the 2022 United Nations Climate Change Conference, referred to as COP27, the Stop the JNF campaign organised a discussion on challenging climate colonialism on 3rd September. A recording of the discussion can be viewed here:

The Stop the JNF campaign aims to challenge the Jewish National Fund and hold it accountable for criminal complicity in ethnic cleansing, illegal settlements and apartheid against the Indigenous Palestinian people. The campaign seeks to revoke its charitable status and challenge the legitimacy it garners through institutional recognition. Palestinian grassroots as well as solidarity groups are challenging JNF’s participation in climate summits and other international fora. COP events are one such forum. COP26, which was held in Glasgow, saw mobilisation against climate colonialism where Israel’s apartheid and greenwashing were raised as well. Further, Palestinian activists were denied travel permission to Glasgow, which was also highlighted by campaigners.

This campaign is part of a wider mobilisation to expose Israel’s greenwashing i.e. the cynical use of climate justice and sustainability framework to cover up its apartheid, occupation and settler colonialism against Palestinians. The myth of Israel as a leader in sustainable technology is founded in a racist lie — of having made the desert bloom. This erases the Palestinian communities that were ethnically cleansed, their homes and villages destroyed to establish the state of Israel in 1948 — remembered as Nakba, the catastrophe. Israel claims to offer its “expertise” to global south states bearing the brunt of the climate crisis and neoliberal policies. In fact this “expertise” has further entrenched corporate profit-oriented contract farming models, as we have witnessed in India, while Israeli agencies and agribusiness corporations continue to steal Palestinian land and resources, attack farmers, destroy crops, and control the export of Palestinian farm produce, labeling it as Israeli.

The No Climate Colonialism webinar covered all these aspects while proposing strategies to mobilise against Israel’s greenwashing. Manal Shqair from Stop the Wall Campaign, speaking from the colonised Palestine, discussed how JNF works to entrench Zionist colonisation of Palestinian lands by taking up projects in the name of sustainable use of land to displace Palestinians. More recently they played a role in the displacement of the Bedouin communities in Al Naqab. They have also tried to force out livestock owned by Palestinian farmers, caused drought-like conditions by planting non native plant varieties, and effected environmental damage in many other ways. Manal linked this to Israel’s efforts to export its technology as a PR exercise.

This ties up with the issues discussed by the Asia Pacific coordinator for the Palestinian BDS National Committee, Apoorva. India has been a key market for Israel’s greenwashing exercise, starting from the introduction of contract farming in the 90s through the Kuppam project in Andhra Pradesh, a state in south east India. Israel’s development agency for this purpose, MASHAV, has tie ups with government departments that bear the costs of running Centres of Excellence which purportedly train farmers in agricultural practices, but the impact of these cannot be traced. Israel’s agribusiness company Netafim is part of the state subsidy lists, which make for a huge chunk of its profit, apart from running other government projects. The company not only plays a key role in staling Palestinian resources but also runs facilities in settlements.

Dipti Bhatnagar from Friends of the Earth International and JA! Mozambique spoke about the false solutions enforced by global north powers which further impoverish global south communities and entrench the climate crisis. She located this crisis in centuries of colonialism and the ongoing resource exploitation. Dipti linked this up to mobilisations that demand accountability, meaningful sustainable solutions and participation and leadership of communities most affected by these processes.

Together the speakers proposed ways to move forward through campaigns targeting corporations and agencies responsible for worsening the climate crisis, opening up fora such as the COP to communities whose voices are kept out even as false solutions are imposed on them. They also emphasised on solidarity as the basis of organising. If the same systems enforce Israel’s apartheid against Palestinians and exploit and impoverish global south communities, then the campaigns to challenge these must come together.