Dakshayani Velayudhan was born on this day in 1912 at Bolghatty, a small island off the coast of the then princely state of Cochin, in an agrestic slave caste, Pulaya. She was the child of social change, for the early 1900s saw some of the earliest struggles for equality and recognition across Kerala.

At a time when women from the Pulaya community were not allowed by the dominant caste to cover their torsos, cut their hair, or even have access to education, Dakshayani and her family defied these norms. She wore upper cloth, was the first female student in her college and the only dalit woman in the Indian Constituent Assembly. Her brothers were among the first in the community to cut their long-knotted hair and wear shirts. Her very name was a marker of subversion since it wasn’t a typical Pulaya name.

Dakshayani married R Velayudhan in 1940 in the presence of Mahatma Gandhi and Kasturba Gandhi, with a leper officiating as priest.

In a two-part conversation with independent researcher, writer and women’s rights activist, Sahba Husain, Dakshayani’s daughter and policy analyst, Meera Velayudhan remembers her mother and the varied ways in which she shaped the history of not just her community but also the nation.

Sahba Husain (SH): Dakshayani had a certain vision for the country. She was committed to matters related to the Constitution, Caste and Gender. She’d even said in one of her speeches that ‘the CA should go beyond just framing of the constitution; it should provide a new framework of life for the underdogs of India’.

Meera Velayudhan (MV): That actually sums up what Babasaheb Ambedkar had said about the struggle for social justice. All that my mother or her family was exposed to in her childhood was social reform. They were all part of the social reform and the anti caste movement. And that part of her life is what shaped her and imbibed constitutional values in her.

SH: During her school vacations, Dakshayani would join her mother who worked as a daily wager in agricultural fields.

MV: Yes, yes. That’s how it was in those days. My mother’s elder brothers were very much part of the conversations on anti-caste practices. In fact a lot of my mother’s recollections are from her own mother’s life. It very much forms her personality –  her family histories and their struggles.

SH: So, it is a generational experience, where you and your personality are shaped by your  mother’s own life.

MV: Yes, the conversations they had at home and in the community.  It is very interesting that in Kerala, although some family matters do not come out openly, many families converted to Christianity.

SH: Did your mother also convert?

MV: She and her younger brother were very young. my grandmother said, let them grow up and decide for themselves. They all used to go to church. My mother did not convert. But – she had a terrific memory – she would assert that she knew the bible by heart (laughs). She also said, ‘the only thing I used to worry about was whether or not we can go to heaven without really believing or having faith’. She was exploring different emotions and  ideas about what religion meant to her. She was also the first female student in her college and the first girl science student and she did really well. These kinds of conversations and experiences shaped her personality.

SH: I read about how the schoolteacher asked your mother in the science lab to stand at a distance and not come near.

MV: Yes, she talked about it. She would say that she learnt everything by just watching from a distance and did not need to be close. She said, I learnt all the experiments from a distance, just by watching. Then there were some other issues with other students.

SH: She also said that there was competition between girls and boys.

MV: Yes, she always said that she wanted to do better than the boys.

SH: What about your brothers? Did she exhort you to do better than them?

MV: They had to struggle quite a bit but they did well in their own fields and made their own lives.

No, but she always told me that I must excel. Our parents told us that they’ll give us nothing big like property or anything, they said they’ve given us education and now we have to build our own lives.

SH: She believed in Ambedkar’s slogan of Educate, Agitate, Organise and followed it in the family too.

MV: Initially my mother did not have much communication with Ambedkar. When my mother was in Kerala, Ambedkar was not very active there. He was often in Maharashtra or Tamil Nadu with Periyar but not Kerala so there wasn’t much interaction. It was only when she joined the Constituent Assembly (CA) that my mother met Ambedkar. While there were a lot of debates and she supported Ambedkar and his interventions, she also critiqued the Draft Constitution of India because she had objections with the parts taken from the Government of India Act 1935, a colonial act that promoted centralisation. She was also the only person in the CA to propose that the draft constitution should be put out there during  the first general election for people to discuss. Although this wasn’t done, she made a significant point with this proposal. This is the kind of intervention she brought, all through her own critical thinking and ideas.

SH: This is what she meant when she said that the CA should go beyond drafting the constitution and bring about a new framework in people’s lives.

MV: Yes, it was an alternate vision of justice. She said that this is not just about law and like Babasaheb Ambedkar, believed in constitutional morality – there may be retrograde values in society but the constitution will uphold the values of morality. 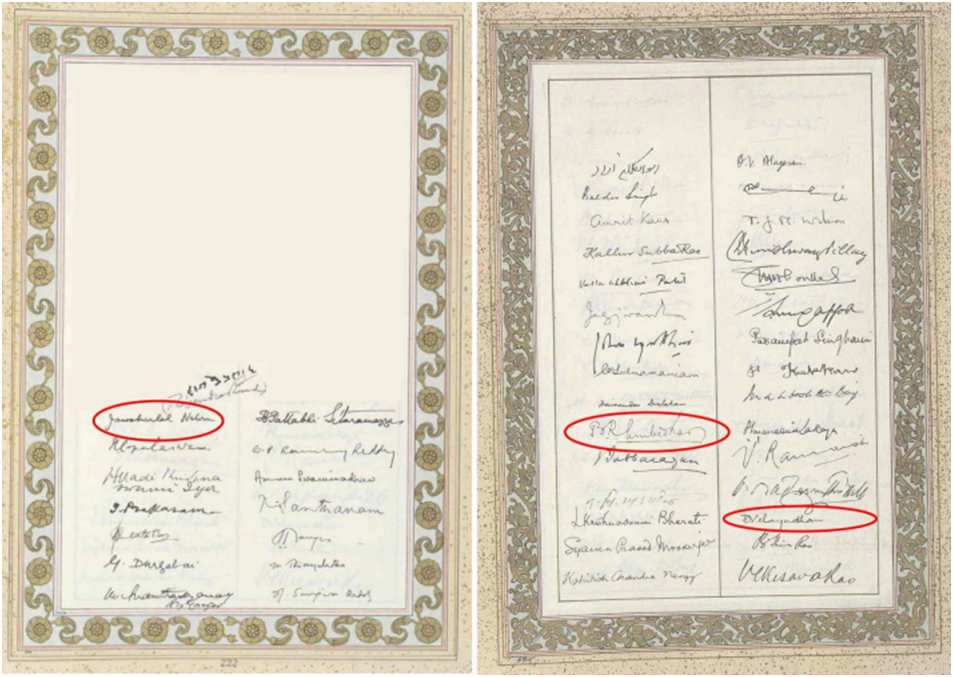 SH: I wonder what she would have to say today, when the constitution is constantly threatened and attacked.

MV: My mother was strongly opposed to the idea of any divisions, whether religious or otherwise. One should also see the discussions and debates by other women in the Constituent Assembly. They all came from diverse political backgrounds but spoke together on the gender issue. These women helped shape the Constitutional clause about non-discrimination and equality. My mother took it upon herself to take it to the marginalised communities.

Once, my mother was stopped on stage in the middle of her speech by the Chair (a man) of the debate who said that she had had enough time. But she continued speaking. It is very crucial to acknowledge my mother as well as other women’s contribution in shaping the constitution and the different visions of justice.  Women like my mother did not get deterred by anything and worked very closely together.  The conversations that took place and the solidarities that were built among women in the Constituent Assembly was also  important for the women’s movement in India.

SH: Your mother’s death coincided with your own political journey – working around areas and issues that your mother also worked on.

MV: Yes. I was drawn into politics when I was a student in the Jawaharlal Nehru University, Delhi. I also met Indu Agnihotri around the same time. We used to visit comrade Jaipal Singh to talk about the need for a women’s organisation, starting with a women’s committee in JNU since we were studying there. I also met Brinda Karat then. We held a meeting along with comrade Jaipal. That is how the idea of forming the Janwadi Mahila Samiti came about. Later on you also joined.

SH: So, your mother was instrumental in shaping your life and beliefs?

MV: Yes, my mother has influenced and shaped my life quite a bit. I remember her in so many different ways. Even small things like when I was studying for exams, she would keep a flask of coffee for me to keep me awake. Any time she saw me even a little bent, she would say, sit straight and walk straight — just as she would tell me to always be confident. That’s how it is — so many small things also I remember.