Dakshayani Velayudhan was born on this day in 1912 at Bolghatty, a small island off the coast of the then princely state of Cochin, in an agrestic slave caste, Pulaya. She was the child of social change, for the early 1900s saw some of the earliest struggles for equality and recognition across Kerala.

At a time when women from the Pulaya community were not allowed by the dominant caste to cover their torsos, cut their hair, or even have access to education, Dakshayani and her family defied these norms. She wore upper cloth, was the first female student in her college and the only dalit woman in the Indian Constituent Assembly. Her brothers were among the first in the community to cut their long-knotted hair and wear shirts. Her very name was a marker of subversion since it wasn’t a typical Pulaya name.

Dakshayani married R Velayudhan in 1940 in the presence of Mahatma Gandhi and Kasturba Gandhi, with a leper officiating as priest.

In a two-part conversation with independent researcher, writer and women’s rights activist, Sahba Husain, Dakshayani’s daughter and policy analyst, Meera Velayudhan remembers her mother and the varied ways in which she shaped the history of not just her community but also the nation. 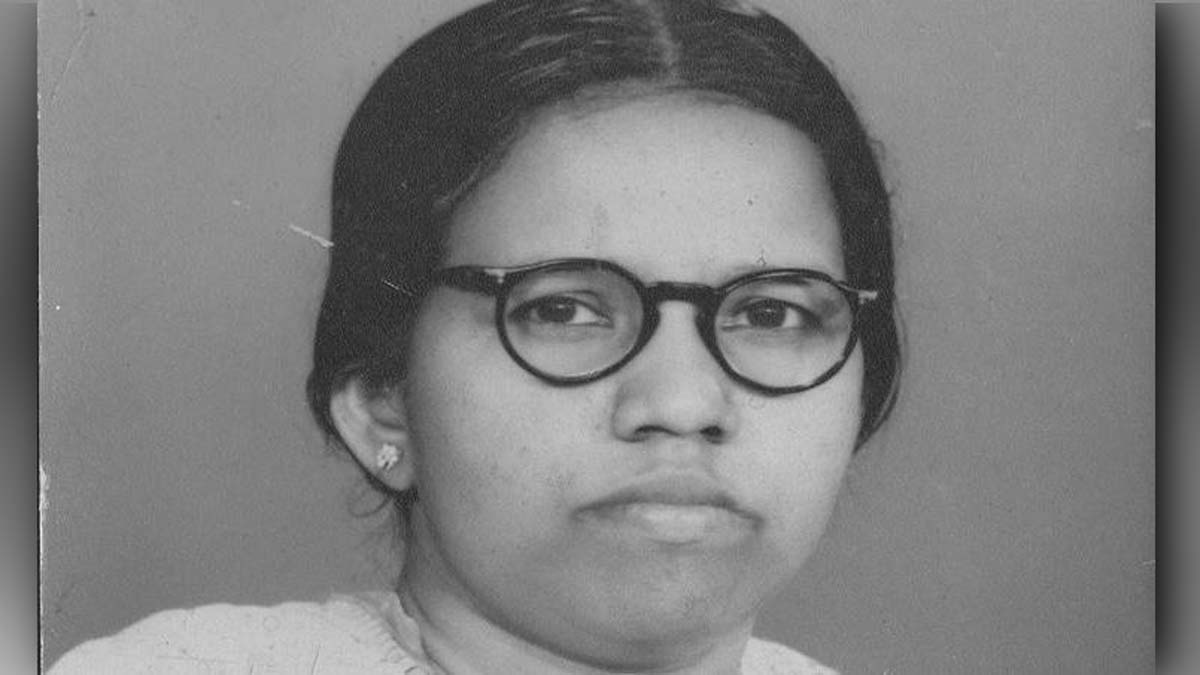 Sahba Husain (SH): Let’s begin with your memories of Dakhshayani. What was it like to be raised by a progressive and politically active mother?

Meera Velayudhan (MV): I have been sharing and talking about Dakhshayani’s life with different audiences and there have been varied responses. Some look at her life from the point of the Constitution and her active role in the Constituent Assembly (CA). Memory is also a process of rethinking – it is dynamic, not static. There is a certain context in which one remembers. This context has to do with the dalit history in Kerala, the history of the marginalised sections of society, the alternate histories that have not been recorded, particularly in terms of my mother’s role.

I retrieved a lot of material on Dakshayani’s life as part of my own research. For instance, I found her graduation picture in a Malayalam women’s journal from 1930. So a memory is also about how I retrieved fragments of her life, and so actually learnt about the parts of her life I did not know about. The most significant thing for me was the positivity and self-confidence that was part of that period in her life and she had a strong sense of history and her own role in shaping it. More than anything else, it was my mother’s sense of justice that guided her – both my parents had this strong sense of justice.

Years later, a couple of years before she passed away,  I gave her a notebook to write about her life.

SH: Your own political journey began a few years before Dakhshayani passed away – in your late twenties. What are your memories of her around that time?

MV: Around that time, Dakhshayani was busy organising the All India Dalit Women’s conference in Delhi along with some Ambedkarite women. She also played an instrumental role in establishing the Mahila Jagriti Organisation that began working with sweeper women in a slum area in Munirka, South Delhi, after the conference. They had no funding at the time but they set up some livelihood and adult literacy initiatives. My mother would go in the morning and come back in the evenings, accompanied by Kaushalya Vaisantri who was in Babasaheb Ambedkar’s Students Front in the 1940s.

The women’s convention itself was very interesting. I was asked to write the leaflet around Babasaheb’s call to ‘educate, organise, and agitate’. That had quite an impact on me as well as the other women who participated. They had all come from different states with varied histories and participation in something like this was new for them. There was Kumud Pawre from Maharashtra who was a well-known writer and Sanskrit scholar. Jyoti Lanjewar was also there – she was more modern, wrote poetry and was with the Dalit Panthers.

So, there were many firsts in this convention that one could relate with, and those last years of my mother’s life really influenced me a lot. There was a certain openness about the interactions and conversations that I heard in this convention.

SH: Tell us about life at home with your parents back then.

MV: The atmosphere at home was politically charged. My father had moved on to the Left and my mother stayed with the INC, she was a Gandhian. But she did not interact much with the All India Women’s Conference (AIWC) which she considered elitist; she wanted to do constructive work. Post-partition, my mother was also very active in refugee rehabilitation work. In fact, there were several families that stayed with us till they found a place of their own.

SH: Your parents were progressive and shared an egalitarian relationship.

MV: My mother was not interested in cooking. My father did most of the cooking at home, but my mother ensured that all of us had a proper nutritional diet. When I started menstruating she explained everything to me with diagrams drawn on a paper and asked my father to bring sanitary napkins for me. Both considered the children’s education very important. There was solidarity and openness in my parents’ relationship. I should add that we saw this openness  in the community as well, not just in my family.

SH: They were also members of the Provisional Parliament. Tell us more about that.

MV: A few months after being in the Provisional Parliament, my father resigned and shifted from the INC to the Left. He had won by 95000 votes. It was a very interesting election. Even though Kollum was not a reserved constituency, he won from there twice.

Dakhshayani had her own path worked out, so she was quite busy, working with Tibetan refugees and people from other communities. She was very active in the refugee rehabilitation program, which went on for many years into the 50s. My father was the president of the trader’s association at the time of Connaught Place and Janpath development, when shops were being allocated to the refugees.

I remember once I went into a shop and the shopkeeper said, “Oh! Your hair looks like a Velayudhan’s”. Another time, when I was doing my PhD in Jamia, a security guard asked me, “Don’t you remember, I stayed in your house?”  I did not recognise him but he recognised me. His family had also stayed with us.

SH: How did your parents manage looking after the families in terms of providing them food, shelter and clothing?

MV: My parents used whatever they got as members of parliament (MPs) to provide for their basic needs. They had out-houses and servants’ quarters where they put up the refugee families. Many cousins from Kerala came to take care of the children and my mother would oversee their education.

SH: Tell us about KR Narayanan – he became the president of India. How was he related to you?

MV: My father R Velayudhan was doing his masters at TISS on labour welfare . He was in touch with socialist such as Minoo Masani who also were part of Tata fellowship for overseas studies . KR Narayanan came to Bombay , was selected by them to study at LSE. Ofcourse he had a brilliant academic record till then. That is how he could go to LSE. It was my mother who took him to meet Jawaharlal Nehru on his return from LSE and letter of recommendation from Harold Laski and academic excellence. Then Nehru set up a board to interview him for the Indian Foreign Service.

KRN even married Usha, whom he had met in Burma,  in our house in Delhi.

SH: You’ve said that Dakhshayani regretted leaving Kerala. Why was that?

MV: During that time, travelling to Kerala from Delhi was very difficult – it would take four days. Once when I had come to Delhi from college for holidays, we went to Kerala. Everywhere we went, my mother was crying. She had so many memories of living there. She was in Delhi because of my father. I think my mother wanted to come back to Kerala. She was not able to, as everything had got settled around my father and their life in Delhi.

SH: Was your father aware that she wanted to return to Kerala?

MV: No. I do not think she ever told him. They were busy doing their work with different sections of society.

SH: Was she in Delhi or Kerala when she passed away in 1978?

MV: She was in Delhi. I was also there, in RK Puram, at my doctor brother’s house. She had a chest infection but otherwise was going about her work with the Mahila Jagriti Samiti.

SH: Before her death, she must have seen you become politically active as a student and also your work on caste and gender. Do you have any specific memory of her from that period?

MV: Yes. She wanted me to have a steady job and income. She was quite concerned and would  tell me that I could be politically active but I must have a job. I was not very sure of what I wanted to do. I wanted to be a journalist so I worked with a journal. I also sat for a bank exam because my mother wanted me to. To my surprise, I got selected but left after some time as the job didn’t interest me. My mother was really disappointed.

I also remember when I went for an interview for the bank job at India International Centre, the interviewer asked about my parents and I did not mention that they were parliamentarians. I just said that they are social workers. The interviewer remarked at the outset that I looked very confident and I told him, yes, I learnt from my mother to always be confident.