The south-eastern city of Jiangxi in China, was a strong base for the communist Red. When in 1934 Kuomintang (Chinese Nationalist Party), with the support of Nazi Germany, undertook a campaign of encirclement and extermination of communists, they were forced to withdraw from Jiangxi. Suffering huge losses and deeply demoralised communists started their long march to Yan’an, which was an ancient hub and home to the Yellow River, the famous yellow earth, and the mythical Yellow Emperor. But now it was a “poor, dusty, and remote frontier town of about 10,000 inhabitants”.

86,000 people had set off to Yan’an in three groups. But after marching for 12 months, over 9,000 kilometers, crossing 18 mountains, and 24 rivers, only 8,000 reached there. The others starved, were killed, defected, or gave up along the way. Midway through the year-long march, in January 1935, the Zunyi Conference was held, where Mao Zedong was established as the main leader of the Communist Party of China (CPC) and its troops. In 1937, Yan’an, located in the communist-controlled Shaanxi-Gansu-Ningxia Border Region, became the official seat of power of the Party. 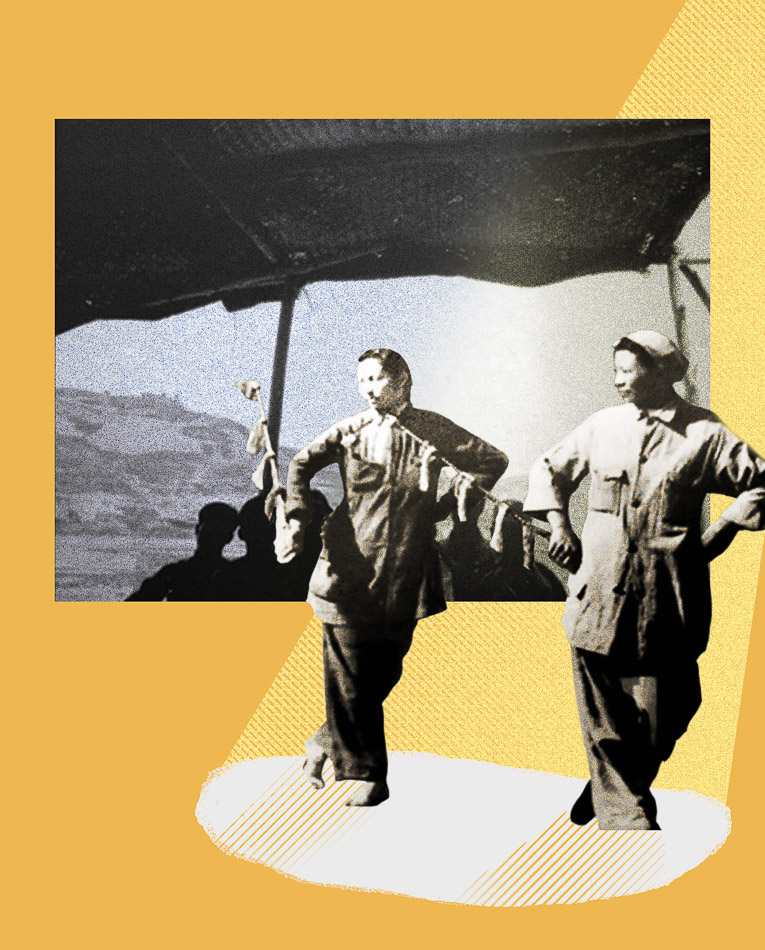 Actors of a Beijing opera troupe perform (Front); Drama students of the Lu Xun Academy of Arts (also known as Luyi) rehearse a play in a structure they built themselves (Back) | Image courtesy Yan’an Red Cloud Platform [延安红云平台]

Yan’an which became the political and cultural epicentre of Chinese communist movement attracted many artists, writers, and urban intellectuals from far away cities. Students from high schools and universities, witnessing the ongoing second Sino-Japanese War and Japanese invasion and occupation of China were inspired to join in the struggle for ‘national salvation’. Thousands of students and intellectuals arrived at the communist-held revolutionary base of Yan’an.

Yan’an was thought to be perfect, embodying all the ideals of a good society. But after arriving, they found that there was a gap between the reality and the ideal. A section of intelligentsia became discontent with the perceived restrictions on cultural workers. They criticised the lack of access to reading materials in the base area and the unconducive conditions for artistic creation, while the other section advised them of “Stepping out from your caves and mingling a bit with the common people would certainly help”.

These debates sparked the need for a forum to bring clarity and unity in the midst of diversity and divergence.

In 1942, a forum was called ‘to exchange views on various aspects of the current literary and artistic movement’. To Mao, who was also a poet, analysing the role of art and literature in advancing the revolutionary struggle was important. In the introductory speech for the Forum Mao said, ‘the purpose of our meeting is precisely to ensure that literature and art fit well into the whole revolutionary machine as a component part’.

This historic forum was part of the Rectification Movement (1942–1944) that sought to create ideological unity in the Party and shrink the still-large gap between the work of the artists and writers and the reality of the peasant majority. It was part of an ideological struggle against the ‘non-proletarian ideology’ — evident in bourgeois, feudal, liberal, and individualistic ways of seeing — that still existed among many Party members. This required, Mao said, ‘a change in feelings, a change from one class to another’.

‘The cadres of all types, fighters…, workers…, peasants… are the audience of our works of literature and art’. Though an urgent task, literacy was not treated as a prerequisite for enjoying and producing culture, a mass culture belonged to the people. The transformation of intellectuals and bringing them closer to the people, was at the heart of the Yan’an Forum, because together, they could turn into an effective political force.

Ma Ke, who was a music student at the Lu Xun Academy of Arts in Yan’an at the time of the Forum, was inspired to participate in the revolution. He has written about his self-transformation in ‘From “Yangko” Opera to “The White-Haired Girl”’. Learning from the peasants’ songs and their determination for emancipation, he noted, was part of the process of ‘popularising the intellectuals’.

Ding Ling, who was an established writer before coming to Yan’an, struggled to write authentic descriptions of peasant life in Yan’an. She embodied this process of transformation. Initially among the artists who had criticised the unconducive conditions for artistic production in base area, she would later summarise the Yan’an spirit saying ‘Creation itself is a political action, and a writer is a politicised person’.

Yan’an Spirit: An inspiration for all

The points raised during the three-week long Yan’an Forum were systematised, revised, and reflected upon by Mao. A year later, on 19 October 1943, this analysis was published as ‘Talks at the Yan’an Forum on Literature and Art’. After its first publication, the text was translated and published in dozens of languages, finding resonance with millions of people around the world.

‘Talks’ is perhaps one of the most important systematisations emerging from the Third World on the role of art and culture and its theory, practice, mistakes, and lessons. It is a product for the people of the Global South.

The Tricontinental: Institute for Social Research has recently produced a dossier ‘Go to Yan’an: Culture and National Liberation’ on how Yan’an inspired cultural work in response to the struggle for national liberation. The dossier also deals with why artists and writers should immerse in the Yan’an Spirit and engage with the ‘Talks’ in todays world.