In Masaan, a Dalit Man Shakes off Hurt and Tears

In Neeraj Ghaywan’s directorial debut, the lead character imagined a new life through love, and overcame hurt only when he threw himself into the vast reality of life.

What if life surrounds you with the smell of death every day? What if you wake up to the smell of death and fall asleep thinking tomorrow will be no better? If this happens at a symbolic level in life, you are bound to move beyond the hurt and tears it brings. There is a reason why historically persecuted communities sing when they suffer. Unlike others, they feel the most profound urge to give life meaning no matter how dark and depressing it gets.

Films in India hardly ever capture this nuance from the life of its historically persecuted people, the dalit community. Scattered across religions, languages, territories and occupations, it is the history of untouchability that has shaped dalits as a community. Although prohibited and penalised by the Constitution of India, untouchability is very much present in society. Almost instinctively, dalits across religions, languages and territories know its presence, in what forms it exists and how it stings. 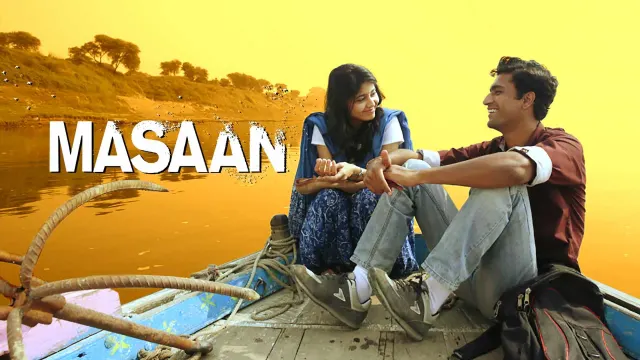 In Masaan, Shalu Gupta, a Baniya girl, asks Deepak Kumar, a dalit boy who loves her, the location of his house. Deepak feels a momentary revulsion about his existence. Revulsion transforms into anger, and he vents before her. Since society never had a language for his reality, he struggles to communicate it. He almost holds himself guilty for living the way he does. But in the next moment, he embraces who he is. His only insecurity is for love. Instinctively, he knows the role caste plays, even when two people from different castes love one another. So, he cannot help but feel repelled by his reality. But he cannot get away from it either.

Such is the dilemma of a dalit man. His liberation lies not in alienating himself from his reality but changing it and resisting anything that restricts this change. Masaan captures this change beautifully.

In the 1990s, Darr, a Bollywood movie starring Shah Rukh Khan as an antagonist (Rahul) and a pathological lover (a harasser), became a rage among the youth. I remember how in my basti, a couple of young men had engraved the names of girls they passionately liked without having spoken with them. This is what Rahul does in Darr. The film had a considerable impact on the youth, turning some into pathological lovers. The desire to love and experience the warmth of a lover’s body is as real as hunger, but popular Indian films have pathologised it. The reason is simple: until recently, all popular Bollywood movies dealing with love and longing saw the world through the savarna gaze. This is the gaze of a privileged man who not only advocates patriarchal values but asserts symbols of casteism in his films.

Until recently, all popular Bollywood movies dealing with love and longing saw the world through the savarna gaze.

As a result, it was nearly impossible for men in caste society (especially those who cannot read) to perceive love as a process that establishes gender equality and breaks caste norms. In popular movies, love has rarely been treated as normal, usual. Masaan, in this sense, makes a breakthrough. This is because in it, for a dalit man, suffering is not just something real but temporary as well. We see that time heals wounds if we allow ourselves to move on with it. And if we resist, we create pathological world views around us and in our life.

In Masaan, Deepak Kumar (played by Vicky Kaushal) belongs to the Dom community, a dalit caste. He conveys the world-view of a dalit man who does not let himself drown in suffering after losing a girlfriend with whom he had imagined a life. It is not easy for a dalit man to be surrounded by misery and remain sane. Almost every day, Deepak helps his father and brother in their work of burning funeral pyres. It is depressing work, but he imagines a new life for himself beyond it, also because he aspires to be educated.

Being in love with Shalu Gupta encourages Deepak to desire such things. For a dalit man in caste society, love is the most potent idea that can break his oppression. Because of caste, his notions of himself becomes that of an unwanted, despicable man. But in love, he is encouraged to break this chain of oppression since the one he is in love with makes him realise he is neither unwanted nor despicable.

With Shalu, Deepak feels the strength of this fact for the first time. He discovers that caste is the antithesis of beauty and equality. His past was caste, but now he wants to pursue a life of beauty and equality. The cardinal principle of the caste system is to restrict a man within his caste and never let him smell, taste, feel, communicate or experience camaraderie with other caste people. The “lower” the caste, the higher these restrictions. The “higher” the caste, the fewer the rules. For Deepak, being in love with Shalu is like breaking these restrictions in the most revolutionary way. It is revolutionary because, in love, he reclaims his lost sense of personhood in the eyes of people other than his caste fellows. Love becomes his entry point to a world where he is accepted as a human, for what he is.

For a dalit man in caste society, love is the most potent idea that can break his oppression.

For a dalit man, this process is an evolution of the mind which helps him find acceptance in thoughts and feelings, including in his angst against his miserable conditions. Shalu seems to understand this when Deepak gets angry as she probes him about the exact location of his home. For a dalit man, exposing the place of his birth—especially if it is in a dalit basti—to a savarna, is no less than a struggle. For, telling this means exposing his caste. Where savarnas often take pride in exhibiting their roots and where they live, for a dalit man, revealing his location is like singing without a voice. He is quite conscious of it all the time. Hence, Deepak gets instinctively angry at Shalu’s questions about his home.

Where savarnas often take pride in exhibiting their roots and where they live, for a dalit man, revealing his location is like singing without a voice.

In love, Deepak charts a new journey into the evolution of his personhood, but his journey is unexpectedly disrupted. Shalu dies in a road accident. Her body is taken to the crematorium where Deepak and his family work. His world shatters when he sees he must burn Shalu. Suffering strikes him so hard that he fails to find his voice for a while. Yet, as time goes by, he keeps forging ahead. His material reality, made depressing by his caste, implicitly make him conscious of the demand of his life to keep moving on, with or without grief.

Deepak cannot afford to be perennially paralysed by the grief of losing the love of his life. If love promised him a beautiful future of equality, his caste reminded him that he had to emerge out of misery. He joins the railways as an engineer. His tears dry up and evaporate. His hurt pales before the vast reality of life that surrounds him. A dalit man awakens to life beyond pain and tears.