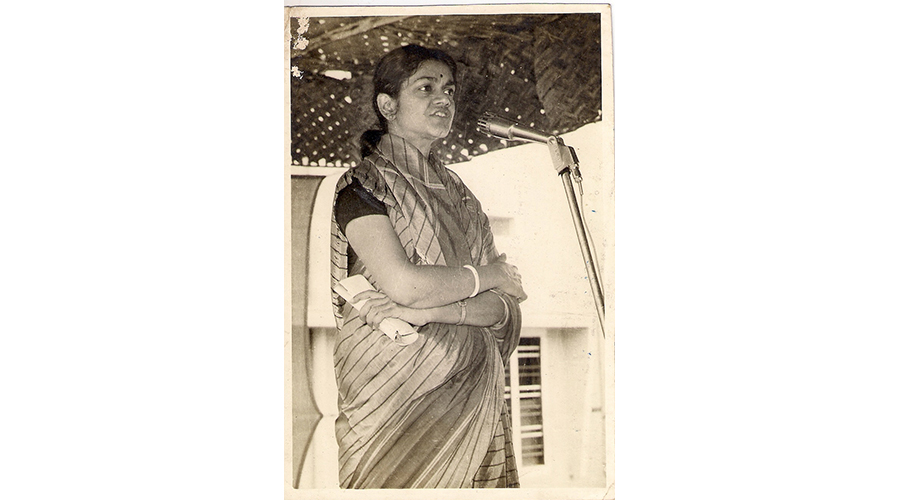 On Tamil Nadu’s western border with Kerala lies the town of Valparai, where the plantation workers went on strike in May 1972. Meenakshi, a worker in her forties, worked at the Periakarumalai Tea & Produce Company. When the police attacked the striking workers, Meenakshi was arrested by them and severely beaten up in the police van. As the police beat her, they asked her if she was a Communist and if she would go on strike again. ‘I kept murmuring, I’ll go on fighting, I’ll go on….’. ‘I was always known as the bold one in our estate’, she said a few months later. ‘I’m not afraid of talking back to the writer or even to the durai [chief]’.

The writer who came to interview her from Chennai was Mythily Sivaraman (1939-2021), a brave young scholar and journalist who was then the editor of Radical Review (1969-1973). The report that Mythily published in Radical Review in April 1973 on the Valparai strike captures the wretchedness of capitalism, the bravery of the workers, and her own commitment to the struggle. The employers, she wrote, know that their power is no longer paramount; ‘they have to face a working people who have learnt the hard way the need for militant struggles and the strength that lies in their united action’.

In the decades to come, Mythily accomplished herself as a writer about working-class struggles and an organiser in the Communist movement. Her writings bristle with the energy of someone who listened deeply to those who struggled to build a better world; her texts drawing from her intellectual energy as well as the workers’ struggles in which she embedded herself. In Radical Review, her detailed studies (along with N. Ram) of Tamil Nadu’s industrial sector continue to feel relevant. No wonder that the bosses at Ashok Leyland and Tablets feared her, not only for her reporting but also for her work as an activist with the Centre of Indian Trade Unions (CITU). One of her most important essays – ‘Gentlemen Killers of Kilvemani’ (published in Economic and Political Weekly, 1973) – emerged out of her engagement with the survivors of a terrible massacre in Kilvenmani, along the coastline of Tamil Nadu in Nagapattinam district. Dalit agricultural workers, members of the Communist Party of India (Marxist), fought against the landlords in this area for higher wages and for unionisation. Thugs hired by the landlords attacked them and brutally murdered forty-four agricultural labourers. Her essay emerged out of a visit to the district for the first state conference of the Democratic Women’s Association (DWA).

Mythily was a member of the Communist Party of India (Marxist) and a member for many years of the Tamil Nadu state committee of the CPI(M). She worked in the trade unions (leading many struggles with CITU) and was involved in the DWA, which in 1981 would become a driver in the All-India Democratic Women’s Association (AIDWA). Mythily would later become the Vice President of AIDWA. In 1992, she was a key figure in the campaign of the Vachathi mass rapes. Forest officials and policemen came into Vachathi (in Dharmapuri, northern Tamil Nadu) in search of Veerappan; they assaulted the villagers, raping at least eighteen women. Mythily was instrumental in putting forward a petition to the National Commission for the Scheduled Castes and Tribes, which resulted – almost twenty years later – in justice.

In 2013, LeftWord Books published a collection of some of Mythily’s essays, Haunted by Fire: Essays on Caste, Class, Exploitation and Emancipation. Next year, we will publish a collection from Radical Review, whose essays by a range of writers bears the marks of Mythily on every page. We send our condolences to her daughter Kalpana and her husband Karunakaran.