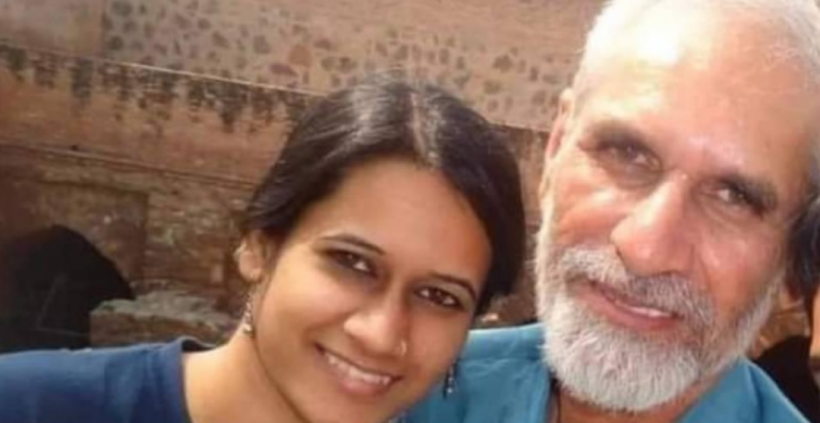 “Due to the remediless crimes committed by the powerful, the words of judgement cry in secrecy.” This immortal line from Rabindranath Tagore’s Proshno (The Question) best depicts how scholar-activist Natasha Narwal and her scientist-activist father Mahavir Narwal were let down. Mahavir breathed his last on 9 May after he developed Covid-related complications. Natasha did not even get a chance to bid him adieu. Thanks to the almost year-long incarceration of the political prisoner, and multiple rejections of her bail pleas, the father and daughter permanently drifted apart. They were failed by us, too, as a collective, and when justice was unable to reach them in the face of the state’s lurking adamancy. What has happened to them is also a painful reminder of the Covid-19 tragedies unfolding across the country.

To unravel what transpired, travel a year back. Delhi Police arrested Natasha, a student at the JNU Centre for Historical Studies and leading activist with Pinjra Tod–a Delhi-based, women-led movement that challenges punitive hostel curfew hours for women–on 23 May last year. The pretext was that she had participated in an anti-CAA sit-in protest in Northeast Delhi’s Jafrabad area in February 2020.

In February 2020, the nationwide anti-CAA movement was at its peak. On 25 May, Duty Magistrate Ajeet Narayan granted Natasha bail on the ground that the charges against her (under section 353 of the IPC which relates to assault or criminal force to deter public servant from discharge of duty) are “not maintainable” as she has strong roots in society and is well-educated. Despite this, Natasha and co-activist Devangana Kalita were re-arrested as the FIR against them included murder, criminal conspiracy and rioting charges. Though these charges fall under sections 186 (obstructing a public servant in the discharge of public functions) and 353 of the IPC, the FIR did not mention assault or use of criminal force against public servants, nor involvement in violent incidents.

While granting them bail under that FIR in September last year, the court affirmed that the two activists were among the women who led a sit-in near the Jafrabad metro rail station, though there was no evidence they had incited violence. In June 2020, they were slapped with the draconian Unlawful Activities Prevention Act (UAPA) and charged with conspiring to spark the Northeast Delhi riots in which 53 people died. Despite being granted bail on other riot-related charges in September, they were denied bail multiple times in the UAPA case.

By contrast, the very same anti-CAA protest at Jafrabad became the pretext for the BJP leader Kapil Mishra to deliver a vitriolic speech against the anti-CAA protesters. While Mishra has gone scot-free, the re-arrest of student-activists such as Natasha demonstrates the blatant abuse of power. This case follows the same pattern as the witch-hunt of democratic and civil society activists across the country who participated in or supported the anti-CAA protests.

Around a year ago, India was dealing with the first wave of the Covid-19 pandemic. Even at that time, the state showed no remorse in continuing its crackdown on students and civil society activists. At the time, no mass protest movements were going on due to the fear of spreading the contagion.

Mahavir Narwal was a senior member of the Communist Party of India (Marxist) and former senior scientist at the CCS Haryana Agricultural University. He succumbed to Covid-related complications on Sunday. He was admitted to the hospital on 3 May.

A parent, comrade, compatriot, Mahavir Narwal was not only an inalienable support system for his daughter but also a believer in her cause. He stood against the state to tell the world his daughter was wrongfully incarcerated. Every time Natasha was denied bail, a cloud of doubts about whether he would ever get to embrace her again would engulf him. Yet he fought the system like a father, as a comrade. Like father, like daughter: he found some solace in that he was jailed during the Emergency while his daughter suffered incarceration during an undeclared emergency.

He passed on the progressive value system of resistance to his daughter and a wider community of students. In a statement, Pinjra Tod said on his demise: “This is an immense loss for us and the larger community, as for Natasha. He was a rock for many, a voice of sanity in the din, calmly and coolly raising his firm voice.”

The plea filed to allow Natasha to meet her ailing father at the hospital was heard on 10 May. By then, it was already too late. Thereafter, a plea was filed to allow her to perform Dr Narwal’s last rites. This time, even the public prosecutors did not oppose the bail at the Delhi High Court. Indeed, she has been granted interim bail for three weeks on a personal bond of Rs. 50,000, on the condition of maintaining “radio silence” on sub-judice matters. The Delhi High Court bench noted, “…the release of the applicant is imperative in this hour of grief and personal loss and in the facts and circumstances of the case.”

Her release on bail would have been a moment of joy for the father and daughter, but it has become a moment of great despair and grief. Instead of returning to the warmth of her father’s embrace, she returned to the horror of her father’s lifeless body.

The ongoing pandemic has ravaged the Indian prison system as it has the rest of the country. Yet, time and again, appeals to grant interim bail to political prisoners and other vulnerable inmates fell on deaf ears. Recently, another activist, Umar Khalid, tested negative for Covid in jail. He had tested positive a fortnight ago. Siddique Kappan—the journalist slapped with UAPA by the Uttar Pradesh government after he was going to report on the gangrape in Hathras in October 2020—is fighting a life-or-death battle against Covid juggling between AIIMS and Mathura is also in the headlines.

Even the memory of imprisoned GN Saibaba being denied permission to see his dying mother over a video call from August 2020 remains fresh in our minds. Thus, the politics surrounding the pandemic is not merely about the virus and the vaccines but about how political prisoners are being treated by the system, physically and mentally. After all, Covid-19 and CAA are intertwined and inalienable: the clampdown on the anti-CAA activists reached its zenith just when the nationwide lockdown had put the lives of all citizens in shambles too.

Natasha and I did not know each other personally though we both enrolled in JNU. Yet, all that she is going through feels deeply personal. Perhaps, amid the collective mourning of the pandemic deaths, Natasha’s pain seems closer to home and her probable rage more than justified. Natasha lost her mother when she was 13. Mahavir Narwal, a single parent, raised her. Motherhood is beyond gender, yet Dr Narwal passed away on International Mother’s Day. On that day, he left the world without getting to meet his daughter one last time.

First published in Newsclick.
The author is a PhD candidate at the Centre for International Politics, Organization and Disarmament, JNU. The views are personal.