Four months in, the farmers’ movement is at a crucial juncture

The farmers’ protests are into their fourth month now. These protests started with people from Punjab and Haryana breaking barricades and heading towards the Indian capital. As expected, the protesting farmers were met with force at several places. However, undeterred by the challenging circumstances, the farmers were able to reach at the borders of Delhi. Though they wanted to protest at the Boat Club, the unwilling government ordered the police to stop them at the Singhu border, the demarcation between Haryana and Delhi. Back then, the government must have thought that these were just a handful of protesting farmers, “misled” by a few political parties. They were unaware of the strong resolve each of them had in them. Since then, the movement has only grown and multiplied.

Many instances were concocted, many fables were told to delegitimise the entire movement and to label the participants as “Khalistanis” and “anti-nationals”. These labels have only strengthened the movement. Punjabis and Haryanvis, well recognised for their participation in the Indian Army, sworn to protect the motherland could not take this insult and came out in more numbers to break the notions that labelled the protestors as the ones who were “misled” or from a particular political outfit. The protests were now no longer limited to Singhu border, but grew overnight to Tikri border and Ghazipur borders. Farmers from Uttar Pradesh, Rajasthan, Uttrakhand, and Madhya Pradesh started to pour in numbers to register their protest.

The failure of this government in handling these protests can be seen from multiple lenses. The Narendra Modi government has abjectly failed in conveying its intentions behind these three farm laws. These laws were brought in through an ordinance when the parliament was not in session. Furthermore, the manner in which these laws were passed in the Rajya Sabha were sufficient to raise eyebrows. The stakeholders, who the Modi government claims will benefit from these three laws, were not participants in the discussions when they were being framed. This government has had the habit of taking the wrong steps first and then later concocting false narratives or completely ignoring the ill-effects of those. An appropriate example is demonetisation, which was brought into force purportedly to “route out black money” from the system, “end terrorism”, and let the government make money through windfall gains that will occur because of the illegal money that will not be reported to the banks. This step put speed breakers on an already dwindling economy, and the effects, which received a further blow due to the pandemic and the consequent lockdown, are felt even now.

In addition to this, the farmers in India have been devoid of the right to fair price to their produce since many decades now. An estimate says that when compared to 1970, school teachers’ income has jumped from 280 to 320 times till 2015. However, in the same duration, an average farmer’s income has only increased 19 times. The delay in payments to sugarcane growers in many parts of India is still a deep-rooted problem. All of this has been accumulating since decades now. The Modi government has added fuel to fire now — these three laws further strengthen the farmers’ belief that already dwindling prices would further plunge if left to the mercy of the open market.

The free market system has not benefitted even a single farmer in any country throughout the world. Farming is a risky proposition — it is dependent on so many variables that the outcome cannot be predicted. In a country like India, in which the majority of farmers with land holdings less than 2 hectares, leaving farmers at the whim of the free market system would mean the prices would dwindle because of the excessive supply. There is a lack of cold storage spaces and transportation costs are high. A farmer with limited resources and low risk of appetite will have reasonable reservations about experimenting with the crops and taking the produce to a faraway land to sell. Additionally, there is no infrastructural support for this. It is obvious that only private corporations stand to benefit from these laws. If the Modi government is so sure about the fact that farmers will get better prices from private companies than what they have been getting in Mandis, they should naturally set a MSP as the minimum legal price at which any crop can be brought. Government has hopelessly failed to explain any rationale, but is adamant on its inability to completely forfeit the laws and give MSP a legal status, and must assure the farmers, without further delay, of a minimum price for a range of crops. 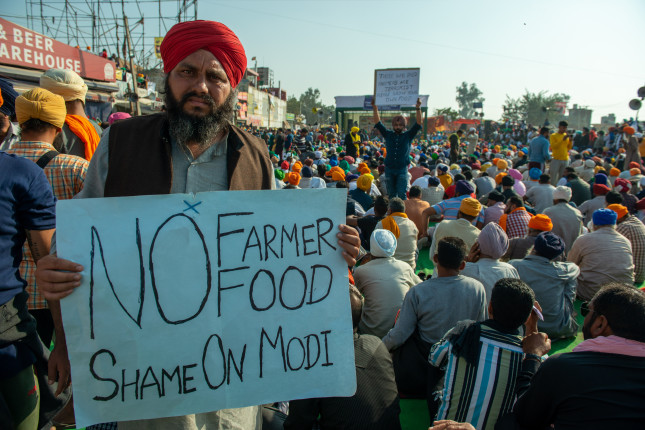 The growing protests highlight how people’s faith in the Modi government is being reduced, how common people can understand the divisive politics of this government, and how lack of proper dialogue and consultation will not be taken silently by this nation. The protest has now decentralised, and is taking the shape of “Kisan Mahapanchayats” across India. The leaders are now reaching out to every nook and corner, including in states which have gone to elections, to make farmers of these regions aware of the injustice that has prevailed over decades, and how the three farm laws that can eventually prove to be the final nail in the coffin of agriculture in India.

The Mahapanchayats are seeing people collecting in large numbers, thus registering their protest against the government and in solidarity with farmer unions and leaders. If these Mahapanchayats are able to impact the outcome of the ongoing Assembly elections in five states and panchayat polls in UP, this might mark the beginning of the end of the Modi government. The political mileage that this movement will gather will be an important tool for making the government concede to the demands of the farmer unions.

Sandeep Pandey is the Vice President of the Socialist Party (India).
Rahul Singh Rana is a Business Consultant.