Valiant communist leader Leelavathi and the fight for water

On 23 April 1997, when Leelavathi was on her way to the neighbourhood grocery shop, she was surrounded by six goons and was brutally murdered on the spot. Only a week away for the International Workers’ Day, her husband Kuppusamy and fellow comrades were just around the corner discussing May Day activities. A sudden uproar erupted and they ran towards the spot, only to find that Leelavathi’s throat was slashed with a sickle, leaving no possibility of survival.

What led to the cold blooded murder of this Communist party worker? 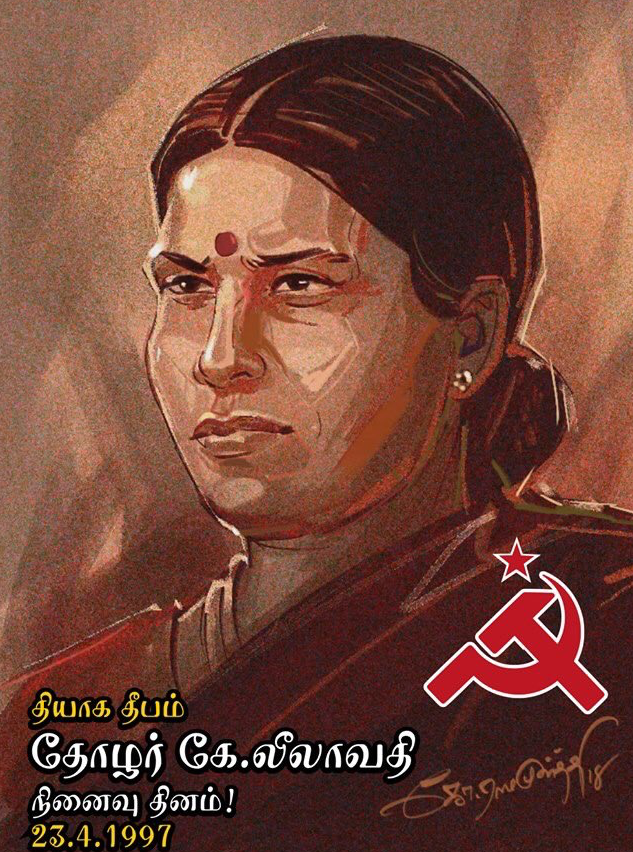 Leelavathi married the ardent Communist party member Kuppusamy in 1977, and she was soon introduced to the movement by him. Leelavathi, a weaver by profession, worked from home and initially involved herself in the activities of the Democratic Youth Federation of India. She is said to be the first woman in the Federation’s local committee. She was brought up on the margins of  poverty, whereby she had discontinued her education with class 10 and took up the family profession of weaving, and was inherently drawn towards fighting for the betterment of the downtrodden. When the rights of the common people were at stake, she was found to be in the forefront speaking up against oppression. Through her political conviction and tireless work she became a leader of the masses of youth and women in the state.

In September 1996 Leelavathi was elected as the Councillor for Ward 59 in the Villapuram locality of Madurai district. It was the first election in which one-third of the local body seats were reserved for women as per 73rd and 74th Constitutional Amendment Act. In the Legislative Assembly elections of 1996, DMK won the majority, and within a few months elections to local bodies were held. Muthuramalaingam of DMK had a stronghold in Villlapuram, and his brother’s wife was nominated as Councillor candidate on his behalf. Leelavathi was nominated as the CPI(M) candidate. Villapuram, which was alternately dominated by DMK and AIADMK for years, became a Communist party stronghold with the rise and victory of Leelavathi.

Money laundering through smuggling PDS ration and commodifying public water, and  the accompanied goondaism were raging in Villapuram. As a resident of the locality and a Communist party leader, Leelavathi mobilised people of the neighbourhood and waged struggles against these atrocities. She also raised her voice against the extortion of small scale shop-owners by the bourgeois party goons. Thereby, Leelavathi obtained the support of not only the working class, but also of a portion of the small-scale business class. Simple and approachable, Leelavathi endeared herself to almost all sections of the people in her ward. She earned the respect of the Villapuram people by being part and parcel of their pleasures and suffering. And, she was known to attend to their complaints with utmost sincerity. Her every move was a threat to the income of the bourgeois party goons, and it was in such a situation that Leelavathi won as Councillor in Villapuram.

Leelavathi’s priority agenda as Councillor was to ensure piped water supply to the neighbourhood. Till then, the plight of the people of Villapuram depended on water tankers. What enraged the ruling party goons was that she exposed their conspiracy to the people. The water mafia had hijacked the Corporation water and redirected it to restaurants, and sold borewell water through tanker lorries for domestic use. In this manner the mafia gained double profits. Water for bathing, cleaning, cooking and drinking was sold for Rs. 2 per portion. The water lorry would arrive at the locality on alternate days, and only a limited quantity would be supplied, which inevitably led to fights over water. For long, the people of Villapuram were waging struggles to regulate water supply in a fair manner, and Leelavathi was leading these struggles against the swindling of the poor by the tanker mafia.

From the moment she assumed charge as Councillor, Leelavaathi’s one-point mission was to end the fight over water, a substance that is a basic necessity for all forms of life. She insisted that water supply be given priority over other development works. She continuously struggled, both inside and outside the Council, to bring tap water to her ward. As Councillor, she sent memorandums to the Madurai mayor demanding water pipeline and water tanks to the locality. In the Madurai Corporation Council meetings she strongly articulated the plea for water. On the other hand, she mobilised the area residents and led protest demonstrations for the same.

Leelavathi and Villapuram people’s continuous struggle yielded results, the work of establishing water pipelines soon began. The necessary tests were conducted, the pipeline was laid and even a trial supply of water was undertaken. Within six months’ time as Councillor, she triumphed in her mission. The entire Madurai city saw Leelavathi as a crusader. But, a day or two before the water supply was to be formally inaugurated, Leelavathi was mercilessly murdered.

The city of Madurai plunged into grief, the political murder sent shock waves across Tamil Nadu. Protest rallies were held in several parts of the state demanding the arrest of the murderers, and for a free and fair trial of the case without political intervention. DMK was the ruling party then, yet six DMK members who were associated with Leelavathi’s murder were arrested because of pressure from people. This is the first of a line of political murders that the state saw, but none other resulted in people’s uproar like comrade Leelavathi’s murder did.

However, Maradu alias Nallamarudu, the primary accused who was sentenced to life imprisonment for murdering Leelavathi, was released by DMK government along with 1,404 others in 2008 during the birth centenary celebrations of DMK founder and former Chief Minister of Tamil Nadu C N Annadurai. In 2008, the DMK government also reduced the 10-year bracket of life conviction to seven years and eased Maradu’s release. This act of the ruling party siding with the guilty met with strong criticism from progressive sections of Tamil Nadu.

At the time of her death, Leelavathi was the State Vice-President of the Handloom Workers Union and a State committee member of the All India Democratic Women’s Association (AIDWA). Even when she was a Corporation Councillor at the age of 40, Leelavathi and her husband Kuppusamy, a vendor of stainless steel utensils, continued to live in a single-room house along with their three grown-up daughters. Her loom occupied most of the space in the house, surrounding it was the bedding and cooking fire, and at night they slept under the loom. A table fan and a black-and-white television set were the only other valuables in the house. She was truly a leader of the masses, she lived the simple life of the masses and with the masses, fought for a dignified life for all and bravely sacrificed herself for the same people.

Part of the content is sourced from Vikatan, CPIM Tamilnadu, and The Hindu, Tamil.
Sruti MD is a student of Literature at AUD and an activist with SFI.

The Constitution as an insurgent document