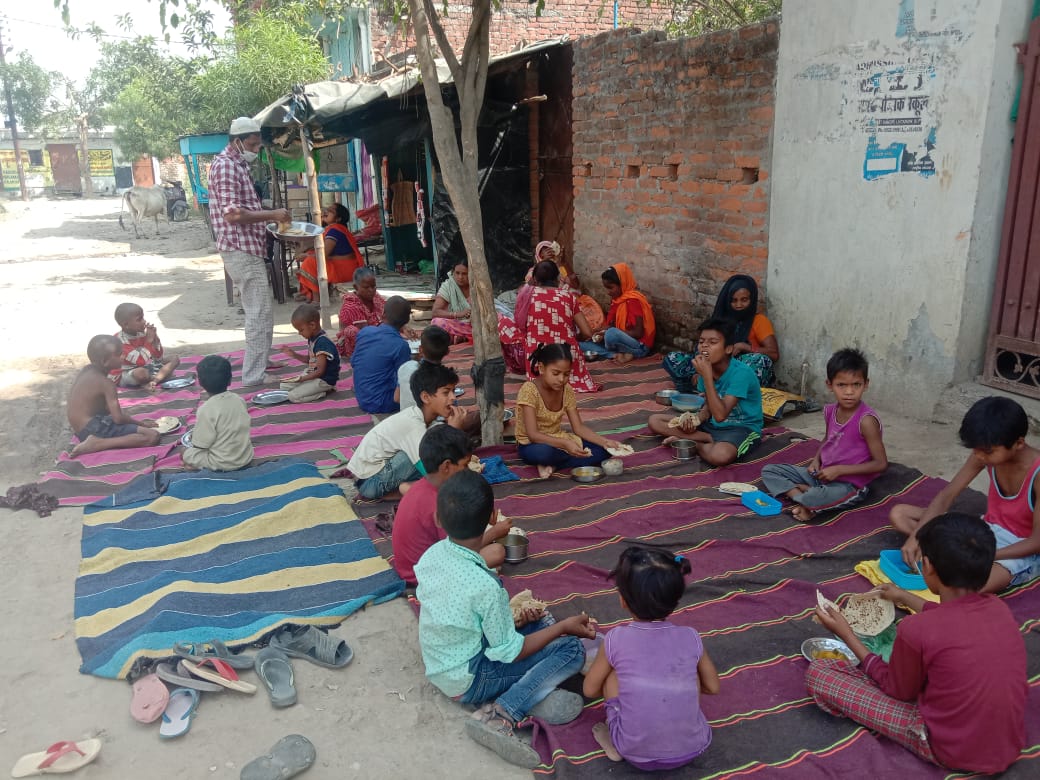 It is now widely accepted that during the Covid-19 pandemic in India decentralised relief efforts, mostly of the non-government sector, were more successful in reaching the needy than massive centralised programmes run by the government. What is hardly known is that in one of the most religiously and ethnically diverse nations of the world,  despite communal politics being used extensively for mobilising voters, relief work has demonstrated that communal and divisive politics have not yet damaged the social fabric.

Our observation from the 23 community kitchens the Socialist Party (India) ran in Uttar Pradesh, Bihar and West Bengal (about half of them in Lucknow), is that the integration of different caste and religious communities on the ground is still not just intact but often quite vibrant.

People have learned to live together and respect each other’s beliefs over centuries in India. This syncretic culture has come under pressure in the recent past with extreme communal mobilisation. No doubt the seeds of distrust between Hindu and Muslim communities have been sown. There are visible changes such as the growing ghettoisation of Muslims and slow withering away of practices such as celebrating each other’s religious festivals.

Since 2009, there have been at least 254 incidents of religiously-motivated hate crimes, according to data from the Citizen’s Religious Hate Crime Watch, brought out by IndiaSpend. At least 90 people have died and around 600 were injured in these incidents. Strikingly, 90% of these crimes have occurred since 2014, when the Modi-led Bhartiya Janata Party government came to power at the Centre.

Like an X-ray, the Novel Coronavirus pandemic has revealed the “fractures in the fragile skeleton of the societies we have built”, the United Nations Secretary General Antonio Guterres said in July. The microscopic virus knows no religion, caste, class, gender, ethnicity or sect. It treats even the rich and poor alike. However, in India alone the virus and the epidemic had a “religion”. The mainstream media reported on the violence and discrimination against Muslims due to fake videos and claims that were circulated on WhatsApp showing Muslim men intentionally trying to spread the virus.

However, working for relief during the lockdown was a very reassuring experience in many ways and especially from the point of view of communal harmony. Here are some instances of members from all social groups working together to assist those in need of food.

Uzma worked as the kitchen coordinator in Dubagga, Lucknow, and when she needed somebody to prepare rotis, Sandeep came forward. Another Muslim woman, Gudiya, was coordinating the work of a kitchen running in the Madiyaon area of Lucknow. She was helped by her neighbour, Ram Janki, and her sons. Gudiya lived in a temporary shelter and so she stored raw food items in Ram Janki’s home. In turn, Ram Janki contributed all her time to prepare meals and serve food at Gudiya’s house, though she refused to eat there herself despite coaxing. Her sons dined at Gudiya’s place.

Zeenat ran a kitchen in the Dubagga locality of Lucknow. Initially, she found it difficult to get the children belonging to the Scheduled Caste stone-cutter community to come and eat, but eventually convinced them. She did not extend her generosity the whole way, for she did not allow older members of the community near her utensils. Yet, during the month of Ramzan, her kitchen was run by a Hindu woman, Asha, from a temporary shelter. Hopefully even this remaining resistance to togetherness would be worn away in coming years as people get accustomed to sharing and caring for one another.

Clothes traders Santosh Thakur and Shanu Abdul Jabbar ran a kitchen in Thakurganj jointly. They have been disbursing interest-free loans of Rs.5,000 each to help small entrepreneurs rebuild their livelihoods. Muslim women from Ujariyaon village, in heart of Gomti Nagar, were recently at the forefront of anti-Citizenship Amendment Act and National Register of Citizens movement. They, too, started a kitchen for migrant labourers from Nepal, who happened to all be Hindus. A woman from the stone-cutter community named Guddi ran a kitchen in her village, Deviganj-Hardoiya, which is some 20 km from Lucknow. She distributed food grain and other materials from her kitchen to the needy Muslim families, who had expressed unwillingness to dine alongside her own community. She was keen to help them irrespective of their prejudice as it was a time of crisis. As anybody who has had to face such battles would testify, it is no easy task to be generous against these odds.

Amit Maurya ran a food service on the Lucknow-Ayodhya highway for migrant workers arriving from all over India who were headed towards eastern Uttar Pradesh and Bihar. He has renovated an old temple in his village by collecting a donation of Rs.5 lakh. He plans to run a Gurudwara-style langar from its premises as an all-year-round food security programme. The langar committee of this temple is headed by a Muslim, Fakire Ali.

Another langar has been launched at a Ram Janki temple in Ayodhya, whose committee is headed by Danish Ahmed and which has members from the Dalit community. A Sarva Dharma Sadbhav Kendra is proposed to be developed at this temple as a “first of its kind” multifaith harmony centre. The trust to build this centre has Faisal Khan of Khudai Khidmatgar from Delhi, a Dalit scholar Harinarayan Thakur from Bihar and a transgender, Reshma, from Patna, as its members. This temple would stand as a shining example of India’s multiculturalism and pluralism. The mahant Acharya Yugal Kishore Shastri has been to jail several times because of this steadfast opposition to politics of communalism.

Qamar Jahan Bano, a tough and passionate woman in Varanasi has assisted in the deliveries of five Muslim and six Hindu women during the lockdown. She was also instrumental in ensuring that dry ration kits were distributed to the most needy across several villages on the outskirts of Varanasi, irrespective of their religious identity. She says, “I work with diverse communities. Though I am born in a Muslim household, it does not mean that I only notice the plight of the Muslim community. I am a human being first, and all humans are equal. I will continue to look at everyone through the lens of humanity till my last breath.”

Such community-led responses give us hope in these tough times. The reality is different from what the conservative right-wing would like us to believe. It is not our differences that divide us but our inability to recognise and accept them. The process of social change is not completed, and communal or caste differences do plague our society still. But when in the middle of a pandemic people cast aside their divisions and reach out to each other despite biases, it gives us more hope than we sometimes give people credit for.

During this pandemic, one of the greatest protests of all time took place in one of the oldest democracies, the Black Lives Matter movement in the United States. It reminded people in the West of their united struggle against the politics of divisiveness. The same has taken place, below the radar, in India as well. The Covid-19 pandemic has made it crystal clear that the only way humanity can be saved is by overcoming differences of caste, religion or colour.

Supriya Joshi works with a think tank in Delhi and Vishal Kumar works in an environmental non-profit. During the lockdown, they coordinated relief efforts for the Socialist Party (India), of which Sandeep Pandey is vice president.

A crisis of resistance: Aftermath of the Ayodhya judgement

Hindu Right, Hindi and the Impossibility of Appropriating Dinkar and Benipuri – II

Hindu Right, Hindi and the Impossibility of Appropriating Dinkar and Benipuri – I