All of a sudden on 8 June, M. Jagadeesh Kumar, the Vice Chancellor of JNU, tweeted the poster of a webinar to be conducted by the university's Centre for Historical Studies (CHS), some days later on 13 June. The “webinar”, titled “The Sarasvati Civilisation: A Paradigm Shift in Indian History”, featured a retired Major General of the Indian Army, GD Bakshi, who spoke at length on the topic. A quick Google search on the man throws up several videos, interviews, and other information, but none of these seem to elucidate his expertise in Indian history or the Indus Valley Civilisation. Naturally, there were many historical and logical distortions in the arguments that Bakshi made. The decision itself, as faculty members in the department stated later on, was taken without consulting all of them.

We present here some of Bakshi's claims about Indian history, from one of his lectures on the "Sarasvati Civilisation", with Shereen Ratnagar's response to each of them. Eminent archaeologist Ratnagar has published multiple works on the Indus Valley Civilisation over many years and is considered one of the foremost experts of the subject. 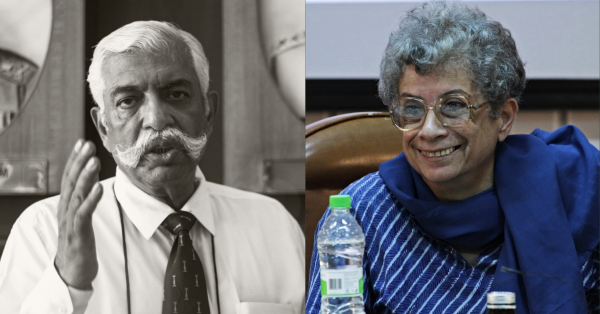 "​60-80 sites of the so-called Indus Valley Civilisation exist not along the Indus, but along the course of the now dried-up Sarasvati river"

Firstly, which are the sixty sites? Such a generalisation needs to be supported with specific data, i.e., names of sites, or at least the numbers of sites near modern towns. Secondly, is it important to him that if we say they lie along the Sarasvati, a nice Hindu name, our school children can forget that it is a civilisation of both Pakistan and India? Is Pakistan just a villain or an evil force for those who deal with the remote past?

Do we not share Mughal history, language, Sikhism, as well as Islam with Pakistan?

The ancient Kushana empire and Gandhara art, Bakshi possibly forgets, were centred on the Potwar plateau and the upper Indus Valley.

Then, there is the puzzle of many crops and animals. In South Asia, as far as we have evidence, the first centre of domestication of wheat, barley, sheep-goats and our so-cherished humped cattle, was Mehrgarh. There was also cotton, for which India was famous in later history. By Bakshi’s logic, we would need to say that  Mehrgarh too is in India.

"Terracotta figurines that have been recovered from these sites have bindis, sindhoor (vermillion), mangal sutra, and bangles; figurines in yoga poses have also been discovered – all of this proving that these traditions go back 8000 years and continue still"

"These traditions" are simply trivia. So do many Egyptian and other traditions in western Asia — of wearing beads or bangles — that go back to ancient times.

A film on YouTube shows how the tradition of making bread in Jordan goes back to prehistory. However, the authors of the film also mention the subtle changes that are taking place within this tradition.

Tradition by definition needs to change according to changing aesthetics, technology, and daily necessities. Otherwise, to do something repeatedly is a dead habit. A bangle is a bangle — all over the world.

Incidentally, the long, red translucent beads of carnelian that the Harappans wore around their necks or possibly also on the waists, and exported, do not form any part of the tradition of later India. The same is the case with "micro-beads" of steatite paste. It appears that the technologies behind making these beads have lapsed.

Not all Harappan traditions could have survived till today — not the writing system, for example. At the same time, not all could have lapsed — in Pakistan, the making of ovens, and even their form, to roast barley seeds continued until recently.

"These also prove that we, as a civilisation, are older than Egyptian, Mesopotamian, Greek, Roman and even Mayan civilisations"

The charts and timelines in most children’s history books state otherwise.

"We have had 800 years of subjugation – invasion after invasion. Our cities were burnt, temples destroyed, women raped and sold off in the brothels of Bukhara, Samarkand and Kabul. 600 years of tyranny — with Afghans, Arabs, Mongols, Turks, and Mughals attacking India"

This is a lament attributed to Rudyard Kipling, commenting on the English in India. We could substitute "India" for "England".

Let us look at a country other than India. Take the case of Mesopotamia (present day Iraq).

Around 2400 BC, the Akkadian people invaded the south of the Euphrates-Tigris Valley and set up an empire; the land gradually changed its written and spoken language from Sumerian to Akkadian. The Kassites established their rule in Babylon after Hammurapi, the law-giver, and his dynasty. They ruled for four centuries after the 16th century BC. They  were “clearly of non-Mesopotamian origin, but cannot be regarded as conquering foreigners,” says archaeologist Joan Oates.

Akkadian later gave way to Aramaic, over the period 1000 to 600 BC. Aramaic was in fact the lingua franca of much of western Asia.

Aramaean pastoralist tribes had settled on the middle Euphrates and surrounding steppe around 1500 BC. Assyrian palace reliefs show scribes writing records of battles in Akkadian cuneiform (Assyrian) with stylus and tablet, as well as scribes writing in Aramaic, with scroll and pen. The literary language of court poetry however remained Akkadian. As a population of immigrants, historians say, the Aramaeans "blended silently into the general population".

Also Read: The tale of the deceased Delhi

Then, the Chaldeans are mentioned in Mesopotamian texts from the 9th century BC onwards.

The Persian Achaemenid dynasty invaded the prosperous land of Babylonia in 538 BC. Now, the glorious Mesopotamian civilisation, with its cuneiform literature, temple art and architecture, and mathematics and medicine, became a tax-paying province of the Persian empire. The indigenous civilisation, language, culture would come to an end after a short while.

Centuries later, the Arabs marched into Sasanian Iran, the only rival of the Roman Byzantine empire, and Mesopotamia too was incorporated by the new Islamic state (it had been a part of Iran) in the middle of the 7th century AD. It was now that the language became Arabic.

The Abbassid Caliphate’s power-base was located in Baghdad and this was the golden age of Islam. Baghdad, however, fell to Mongol rule in about 1258 AD.

In the 14th and 15th centuries AD, Turkmen ruled Iraq. They were defeated by the Safavids of Iran. In the 16th century, Iraq (Mosul, Baghdad and Basra) became a province of the Ottoman empire.

I need not recount the post World War I mandate over Iraq won by Britain, or  the ghastly ruse used by the USA and UK to invade Iraq in 2004, overthrow its government, and destroy its antiquities.

India claims to be a world power. Although some American school children learn the epic of Gilgamesh, we don’t teach our school children about ancient civilisations other than India. I protested — and became unpopular — about this in around 2004 when the NCERT gave just a single page to Egypt and Mesopotamia. This is now the price we pay.

Shereen F. Ratnagar is an eminent Indian archaeologist whose work has focused on the Indus Valley Civilisation. She is the author of several texts including Harappan Archaeology: Early State Perspectives and The Magic in the Image: Women in Clay at Mohenjo-daro and Harappa.