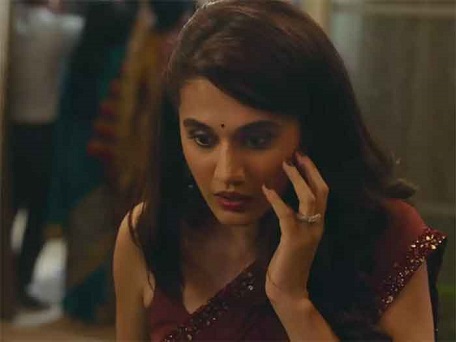 The movie ‘Thappad’ (translated as ‘the slap’) is not merely a movie that narrates the tales of  domestic violence and its normalization, it displays the everyday forms of gendered roles and labour that are largely invisibilized in the processes of internalization and performance of heteronormative male privilege in the institution of family. The movie is based on the story of Amrita (Taapsee Pannu) who is married to an affluent, young professional Vikram (Pavail Gulati). Amrita is a stay home wife and the primary care-giver for Vikram’s mother. Amrita seems to be happily coordinating her life around the Vikram’s dreams and aspirations until the day she is slapped by Vikram in public. Amrita’s decision to leave the marriage is triggered by this one slap and Vikram’s failure to offer an apology to her.

‘Thappad’ has the potential to begin the necessary conversation around the everyday reality of inequality in intimate relationships. It undoubtedly hits the bull’s eye in making a strong point that the physical performance of violence, be it done once or multiple times, is a reflection of an inherent systematic inequality in the institutions of marriage in India. There are, what appear to be a few auxiliary tropes running around the main theme of the movie that show how the different class dynamics facilitate different kinds of violence in marriage. However, a few questions linger on while we understand how the movie treads a fine balance between an out and out attack on patriarchal institutions and educating-without-alienating the urban-savarna male audience.

Does the movie inadvertently glorify the template of a model wife?

Does the movie foreclose the possibility of conversations around violence towards, for example, a ‘non-participative’, ‘non-productive’ and ‘non-efficient’ women in intimate relationships? The problem lies in the movie’s uncritical valorization of women’s ability to invest their physical and emotional labour in the family and relationships as almost a given (if not a precondition) to initiate a conversation about their demands for fair treatment and respect in return. The value of Amrita’s labour and sacrifice as a carer and a hands-on wife has been highlighted throughout the movie to reinforce the significance of Vikram’ entitled and unfair behavior that culminates into a slap.

It is not really necessary to always portray women as ‘productive’, ‘duty bound’ and ‘responsible’ as Amrita is to be ‘worthy’ of the respect and equality she deserves in the marriage and in the family. Does this kind of portrayal really challenge the patriarchal template of gendered labour or merely ‘attempts to legitimize’ Amrita’s defiance against the disrespect as fair as she ticks the boxes of a normative and ‘good’ wife?  Does it leave room for the so-called ‘unproductive’, ‘imperfect’ and ‘not so hands-on’ women who do not tick those boxes in the socio-economic matrix of intimate relationships?

There is also an undercurrent narrative of measuring productivity and the potential of professional success of an individual and the lack of it. This is especially evident in Amrita’s character who talks to her father sometime about whether she could not have been economically better of  had she followed her career in dance, or her mother Sandhyaki (Ratna Pathak Shah)’s character reminds her husband (Kumud Misra) that he did not pay attention to his wife’s aspirations despite being an otherwise responsible and respectful husband. There is also a point where Amrita says that she chose to be a housewife and asks her husband whether he would have agreed to swap their respective roles as the stay-home-earner and carer.

It is necessary to have conversations about the oft-untapped and underutilized professional potential of women trapped within a gendered economy of domestic labour and misplaced priorities through internalized patriarchal values. However, one must be cautious that the critique of male privilege and domestic abuse remains equally inclusive for women who may not have such easily identifiable makers of socio-cultural capital to make their cases.

Despite pointing out at the sources of male entitlement and privilege in the savarna upper-middle class world, the movie shows the blueprint of a respectable exit by the women, be it by the lawyer Netra Jaisingh (Maya Sarao) who neither holds her husband accountable for marital rape nor directly challenges him, or Amrita, who refuses to file a case for domestic violence. (Perhaps not to alienate the male audience?) It is important to show how women negotiate agency in the family where inequality is normalized in the garb of love and care and gaslighting and emotional abuse often pass as advice and guidance from the more powerful members. Nevertheless, reiterating the age-old social codes for the respectability and value of an educated upper-middle class savarna woman to legitimize her defiance of patriarchy as ‘valid’ sabotages the subversive potential of the movie.

The decisions by both Amrita and Netra to end their respective marriages are shown to be contextualized in their capability of choosing alternative lives based on their own skills and support systems, forms of social and cultural capital mostly available to women from the middle and upper class. The long monologue by Amrita in a ghunghat (Veil) before her soon -to-be-ex in laws about normalization of unequal gender relations within family does question the patriarchy without threatening a subversion. Amrita or Netra’s exit from their marriages remained statements of individualized sentimental defiance without engaging with the questions of possible structural-legal safeguard against intimate-partner violence.

First published in Countercurrents.
Dyotana Banerjee is an adjunct faculty at Indian Institute of Technology Gandhinagar.