Speaking Up
Democracy and Populist Politics During Lockdown
May 6, 2020 Krishanu B Neog 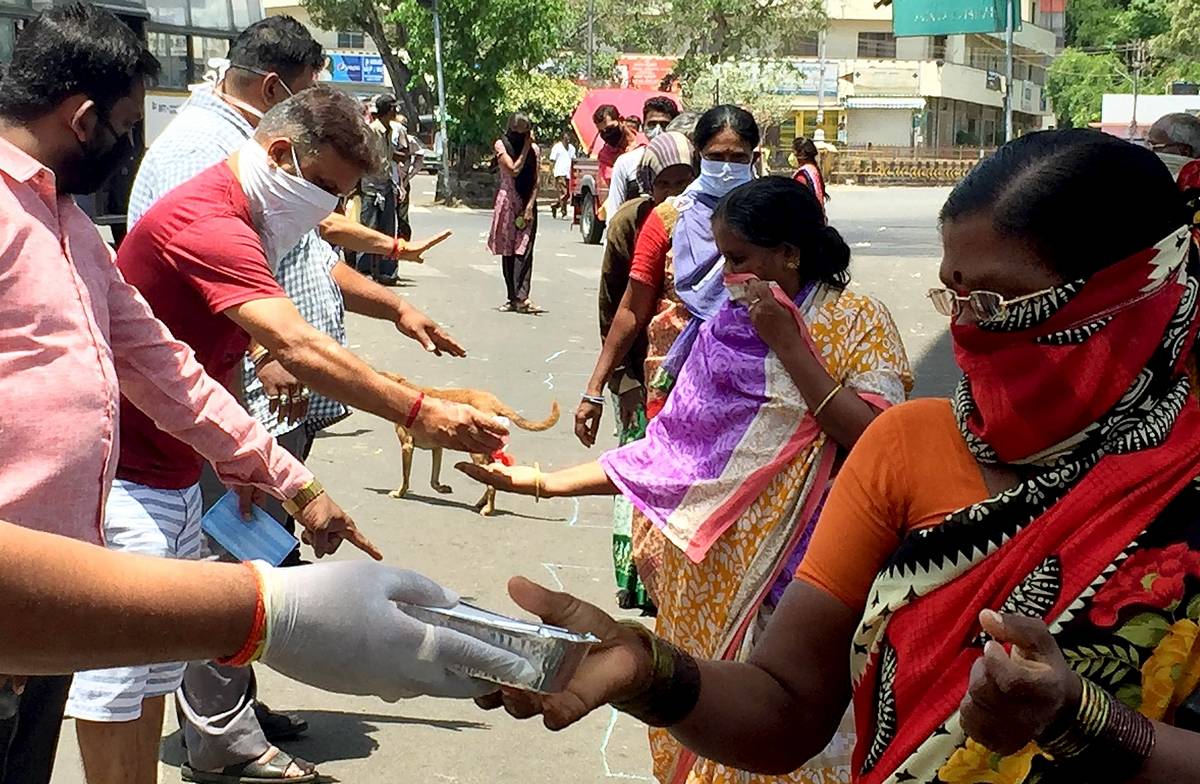 The lockdown in response to the Covid-19 pandemic has raised concerns about governments around the world assuming emergency powers. Some heads of state can now rule by decree and decide when the state of emergency is over. Some have postponed elections, suspended courts where cases against them are pending. Some have declared the entire political opposition to be fifth columnists. Countries where pro-government media blatantly peddle propaganda and misinformation can now effectively persecute journalists and censor the media in the name of battling fake news. Armed forces run the streets in Togo, Chile and other places, quelling dissent over long-standing issues that preceded the pandemic.

Physical distancing, undoubtedly necessary to battle the pandemic, has been used as pretext to hound marginalised populations (for instance, in Uganda). This is on top of the increased surveillance and data-collection measures put in place ostensibly to track the spread of the Novel Coronavirus, which causes the Covid-19 disease. Global indices of democracy, at their lowest ebb even before the pandemic, do not bode well for the post-pandemic period as well.

A pandemic in populist times:

The scenario is further complicated by the nature of some populist regimes that are in power. The world has been going through a populist zeitgeist of sorts, and right-wing populist leaders are at the helm of affairs in Hungary, the United States, Philippines, Turkey, Brazil and many other nations. The definition of populism is highly contested, but populist leaders are generally characterised by their scant regard for institutional mechanisms, expert opinion and pluralism. They typically have antagonistic relationships with the section of the media that is critical of larger-than-life personalities and their regimes. Such leaders seek to bypass all mediation and directly represent the will of the “people” against a “corrupt elite”. Anyone who falls outside of the ambit of this “people”—the political opposition, minorities, vulnerable migrants, and others—are treated as an enemy, who is delegitimised or persecuted. [This is a highly partial picture of populist regimes, as instances from 20th century Latin American populism would show]. Populism is highly moralistic and has a polarising world-view that constantly draws a strong “friend/enemy” distinction. For all these reasons emergency powers in the hands of populists sets alarm bells ringing.

Populist regimes are not alone in attempting misuse of emergency or exceptional powers. The Patriot Act, passed by the United States Senate immediately after 9/11 during the Bush presidency exemplifies this, as do other draconian national security laws promulgated in a number of nations over the last two decades. ‘Exceptional’ laws that allow regimes to appropriate sweeping powers to conduct surveillance on citizens, indefinitely detain them, conduct ‘enhanced interrogation’ and otherwise contravene the spirit of constitutions and the rights of individuals are spreading around the world.

John Locke, in his Two Treatises of Government, attributed to the executive branch “prerogative” power: governments have discretion to make decisions during extraordinary circumstances not foreseen by existing legal norms. Governments may even violate existing laws for the “public good”. Abraham Lincoln’s executive actions during the American Civil War are often cited as an instance of this.

Populism and prerogative power intersect on the question of the ‘trust’ invested in political representatives or leaders in a democratic system. The French philosopher Bernard Manin has said that when electorates select representatives today, they are entrusted with the ability to make quick decisions in the name of the “public good” when unanticipated developments occur. Regular elections would check such exercises as they would require that leaders and regimes seek renewed mandates. To Manin the mass media of our time has turned modern representative democracy into “audience” democracies, where politicians seem to perform on a mediatised stage, and are judged on the basis of their mannerisms, sartorial styles, effectiveness of their speeches, or their other bodily attributes, including their gestures.

Such a personalisation of politics makes the figure of the politician more important than political parties or policy platforms (personalised politics is also gendered, and female politicians are judged by different standards). This form of politics has helped politicians of all stripes, from Barack Obama in the United States to Rodrigo Duterte in the Philippines, to Canada’s Justin Trudeau.

Populism, however, has been specially boosted by the growing focus on the individual political leader, more so because the media tends to train the spotlights on them. The leader, by definition, is pivotal to any kind of populism. The leader “names” the “people” (and thus, the enemies of the people) and calls them into action. The leader is entrusted with exercising sovereign power in their name (to address their grievances against the “enemies of the people”), a sovereign power that the “people” were allegedly deprived of by the institutional politics of the “elite”.

The political philosopher Giorgio Agamben was widely criticised in February for dismissing Covid-19 as a “normal flu” and downplaying the need for physical distancing measures in Italy. As Agamben’s work on “state of exception” would tell us, this condition is usually understood to exist when normal constitutional/legal norms or the rule of law cease to exist, especially hurting the rights of citizens. He has some important insights on our predicament: first, the governments have a nasty habit of clinging to emergency powers long after what brought about the emergency has passed.

Second, the pre-World War-II European history show us the “…vicious circle in which the emergency measures they seek to justify in the name of defending the democratic constitution are the same ones that lead to its ruin”. Third, that modern states rarely promulgate a full-blown state of exception any more. Instead, exceptional measures are normalised by invoking national security.

In his recent essay Agamben says that life during the lockdown has been “reduced to a purely biological condition”, perhaps relating it to what he has called bare life. The privileged can physically distance and resign to “working from home” to avoid contagion. The vulnerable and marginalised, such as migrant workers, will struggle to survive in similar conditions. Of course, governments can mitigate their suffering by providing nutrition, shelter and health services, as Kerala has been able. (And physical distancing and isolation is important to stop the contagion.) The Slovenian philosopher Slavoj Žižek has demanded that governments perform their duties in these times, and has hoped that new global political solidarities will emerge from the lockdown. Others consider physical distancing and self isolation a form of solidarity and care.

However, the usual modes of political action such as organising, holding meetings, or protesting have become impossible (except through social media). From Aristotle to Hannah Arendt, political thinkers have argued for political rights as an inalienable part of being humans; the ongoing suspension of politics, which almost reduces people to mere biological existence, can have serious, disastrous consequences. For while citizens will be unable to engage in politics, such as during this pandemic, state power would not stop acting politically on the citizens (often with emergency measures). One might therefore see measures to bypass rights and legal processes to persecute political activists, journalists and those who exercise their right to dissent everywhere.

At home, the Unlawful Activities Prevention Act (UAPA), has roots in the extraordinary powers granted to the executive during India’s Emergency (1962-1967, during the wars with China and Pakistan). A colonial-era precursor to this law, which violated the fundamental right to freedom of association, was struck down by the Supreme Court in the VG Row vs State of Madras case of 1952. Lok Sabha debates of the time show that Opposition legislators expressed apprehensions that such an Act might hound those the party in power considers its foes. Amended multiple times since then, the law now aims to combat terrorism. It carries serious charges of threatening the sovereignty and territorial integrity of India, secessionist attempts and so on. The UAPA primarily allows the government to ban associations and prosecute alleged members of banned outfits. However, the way it has been operationalised, and its amended versions, have been criticised by legal experts.

Activist Akhil Gogoi was booked under the UAPA last December for alleged links with Maoists. The NIA could not produce a charge-sheet against him and he was granted bail. However, other cases related to the anti-CAA protests in Assam have been filed against him extending his imprisonment while the pandemic rages (Bittu Sonowal and Dhajjya Konwar from his organisation are imprisoned as well). Gogoi’s ordeal is being granted bail and then almost immediately being arrested on new charges. Civil society, from Assam and elsewhere, have expressed their disquiet at this turn of events (especially with regard to Gogoi’s health) in a statement but to no avail.

Michele Bachelet, the UN High Commissioner for Human Rights and a survivor of Augusto Pinochet’s torture chambers, has called for the release of political prisoners and dissenters (as inmates in overcrowded prisons run the risk of infection). It remains to be seen if, in these circumstances, governments heed her call.

First published in NewsclickThe author is a doctoral student in the Jawaharlal Nehru University.