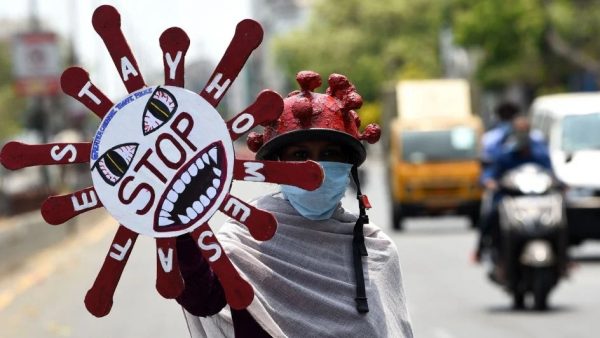 Many had thought that the crisis created by the COVID-19 pandemic and the lockdown would bring back basic questions about healthcare, education and capitalism, but we are witnessing instead a preoccupation with conspiracies. Many continue to believe that the Muslims and the Tablighi Jamaat are singularly responsible for spreading the viral pandemic, and that a kind of bio-jihad has been initiated against the Hindus.

Rumour and conspiracy seem to stick easily and very few wish to check the veracity of information it is based on. Right-wing social organisations are making the most of these floating rumours and producing a new mass psychology of conspiracy. In fact, denying a conspiracy itself ends up looking like one.

Why do rumours and conspiracy become templates for politicising public issues? How and why the Novel Coronavirus can spread is very clear, and anyone who really wants to know can easily find this out. The pandemic this virus has wrought is not afflicting India alone but is a global phenomenon. So how can one community and one organisation alone be responsible for spreading it? Yet, there is an emergent psyche that is finding an easy resonance with this way of seeing the crisis. This is not the first time that rumours or conspiracy have taken over mass psychology. There were earlier glaring instances, such as of the idols of the Hindu god Ganesha drinking milk all over India. There was the infamous instance of a “monkey-man” in Delhi where it was believed that a monkey-headed man was attacking passers-by.

It is a very well known fact that rural India is replete with rumours and myths of such kinds, especially stories of ghosts doing the rounds. Earlier, there were rumours, but now they have been scaled up to a collective belief that there is a grand conspiracy against India or Hindus. This is slowly and gradually resulting in public lynchings, as a paranoia is created by the notion that some deep conspiracy is afoot.

The recent case of two sadhus being lynched was a response to a rumour. The lynching of health workers is becoming a new normal, including the case of a doctor being denied a decent burial by a mob—not to mention the lynching of Muslims and Dalits. We have degenerated very quickly into a bloodthirsty collective. Suspicion and mistrust are growing, and the pandemic that needs trust to fight is turning us into a paranoid society instead. Right-wing politics is only waiting to reap the benefits from such a situation.

There are multiple reasons why rumours and conspiracies so easily become part of mass psyche. In India, the State holds the society together. We are a collection of motley communities and the State was the conduit linking the various communities. Today we are staring at a context where the State itself is actively promoting conspiracy theories. It is creating a false agenda in a manner that further augments fissures on the ground. The new question that needs to be answered is: how does a fragmented society fight a unified State that is creating a culture of paranoia?

It is important to break down the modalities of rumours and how they are converted into conspiracy to then become part of mass psyche. Rumours hold the potential to become part of a mass psyche only when they tap into cultural codes that people are already familiar with. It has to look and feel familiar, believable, and unfair and unjust. One has to concede that the Right has a grip over how these cultural codes of memory, myth, trust and popular beliefs that structure our thinking work. The Right also understands how people respond to everyday emotions. It is this combination of culture and emotions that creates believability, which is then manufactured into a conspiracy and mass paranoia—because what is being told looks and feels both authentic and unjust.

There are modalities through which we trust something or repose trust in someone. There are familiar codes, emotions and responses that we look for. For instance, we would admire someone who takes responsibility for a “mistake” even when they are not precisely, or entirely, responsible for the act. It conveys the message that for the larger good, you are willing to be the “fall guy”. This is the general template on which reciprocity works. It was recently visible in the way Prime Minister Narendra Modi pleaded for forgiveness for imposing the lockdown. He conveyed that although it was not his intention to cause anybody trouble, he was forced to take a harsh decision, and yet he is pleading guilty.

The optics of such statements makes for an authentic and authoritative act. We tend to trust what appears vulnerable and affable, even independently of the authenticity of the content; for instance we trust the intention to please or make us happy, even if the content of the act may itself not be exactly pleasing. This can be seen with the cultural world of advertisements. Most advertisements either make exaggerated claims or are simply not true. When deodorant-manufacturers claim that those using their brand will be swarmed by good-looking women, that is not a fact, neither is the claim going to come true, yet we appreciate the “good thoughts” of the manufacturer. In this case, the inauthenticity of the content actually makes for a more pleasing context. The advertiser’s charlatanism is not meant to cheat you, but inspire you. The intention, therefore, is not the same as the content.

The separation of content from intent cannot be read merely as a manipulation but also as an authenticity. This was clearly visible on many occasions during the course in power of the current regime: often, the content and quality of its performance was separated from the intent. Demonetisation is a good instance of this. In such cases, the very act of separation makes it more authentic.

It is these cultural codes that determine our responses. Once such cultural codes have taken over to fill people with rumours that are meant to create hatred and polarise communities, it is not sufficient to critique the content because the mass psyche is receiving it through codes and not necessarily content. It is important to reoccupy those codes and encode them with different meanings. Without tapping into cultural codes, trying to convey alternative political meanings can itself be perceived as highly inauthentic, which further strengthens mass paranoia.