COVID-19: In the land of a heartless lockdown 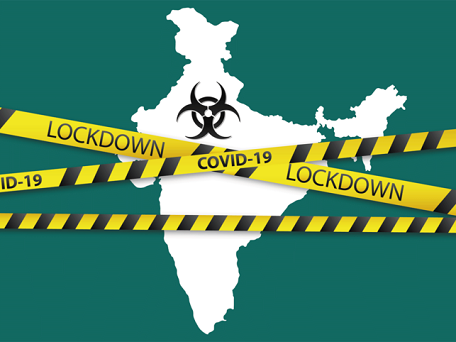 Prime Minister Narendra Modi expectedly announced an extension to the countrywide lockdown till May 3 in yet another speech to the country on Tuesday. He argued that India had managed to beat back the deadly coronavirus pandemic till now due to the three weeks long lockdown and other measures, and urged yet more “restraint, penance and sacrifice” from Indians.

How much the three-week lockdown helped in stopping the pandemic in India has been analysed elsewhere in NewsClick, as also how essential is a lockdown as a strategy, considering many other countries (including China) never had one.

There is another dimension of the lockdown, however, that has been brushed under the carpet by the Modi government and the urban elite. It is the impact of such lockdowns on the people, the sudden yanking away of income sources, the empty grain stores, the inability to pay for common items, even if available, the loss of jobs, and the looming uncertainty of the future weeks, as things look like worsening.

How was this human dimension handled during the first three weeks? And has any amends been made, lessons learnt for the coming days till May 3? These questions have split the country into a well known divide – the class divide. While the well heeled and well stocked sections of people are full of passionate intensity for continuing the lockdown, irrespective of all the pain it is causing, working people of all kinds favour a better approach, which gives as much importance to their earnings and hunger as to saving them from the virus.

Partial estimates put the joblessness rate at nearly 24%, as estimated by the Centre for Monitoring Indian Economy (CMIE). Nearly 50 million short-term migrant workers have lost their work and over one million migrant labourers are stuck in shelter homes far from home, according to an affidavit filed in the Supreme Court. Although a slew of relief measures for the poor people were announced both by the Centre and state governments, they are highly inadequate and there are huge gaps, preventing these measures from reaching those who need it. The Modi government admitted in the Supreme Court that in 13 states, NGOs provided food to more people than the state governments. Most migrant and rural workers are likely to descend into even harsher poverty. In urban areas, lakhs of formal and informal sector earners – whether employed by others or self employed – have suffered a catastrophic loss of income. The government’s feeble attempts to use funds from Employees’ Provident Fund and other such sources to somehow deliver some measly amounts to people through cash transfers have not been efficient, nor are they sufficient. Meanwhile, the government is reportedly readying plans to increase the working hours in a day to 12 hours to boost production with a smaller workforce. That means a death knell for a large number of workers and also immense losses and onerous exploitation for those who do work. And of course, they are pushed to exposure to COVID-19. But then, the government is doing this at the behest of big businesses, and workers are expendable.

Meanwhile, the Right To Food Campaign has compiled reports of at least 45 deaths, which includes deaths due to hunger, exhaustion and accidents of people walking back to their homes, police atrocities, inability to access medical services and suicides. Poor people are struggling to get food even from the PDS shops since supplies are erratic and many do not have ration cards. Along with the migrant workers and rural poor, urban slum dwellers across states are struggling to get access to food and ration as often they do not have ration cards. The Modi government announced that poor people would get 10 kg of rice or wheat, and 5 kg of pulses. According to the latest PIB statement, a total of 2 million metric tonnes of food grains have been unloaded by the states during the lockdown. But the government data shows that there was a surplus of 77 million tonnes with the Food Corporation of India. Pulses are also available in NAFED [National Agricultural Cooperative Marketing Federation of India] stocks, but they are unable to transport them to the needy. In fact, food should have been distributed across the board to everybody, as demanded by the Right to Food Campaign and the Jan Swasthya Abhiyan, irrespective of whether they have a ration card, with 10 kg of grain, 1.5 kg pulses and 800 gram cooking oil per month per person for at least six months.