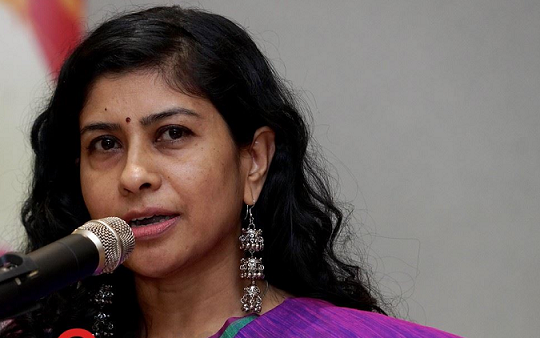 The Ecstasy of Influence

I spent my childhood in Mumbai, where we lived in the secluded residential area of the Indian Airforce. Mumbai is a place of memory of many of my firsts — the first ice cream cone, the hats with multi-coloured feathers, my first acquaintance with Hindi songs — the Hindi songs through which the beautiful world of ghazals opened the landscape of poetry for me. We moved then to Chennai where this love took me to study Tamil literature after experimenting with Statistics. All along, I had understood poetry as an refreshing esthetic experience of imagery, metaphors and love that I was drawn towards. Even though I fathomed the crevices into which the words of Akkamaha Devi, Avudaiakkal and Andal fell, they existed outside my core. When I married and joined my family in Toronto, Canada, there was a rupture in this understanding of poetic beauty. I realised poetry to me is the dichotomy between turmoil and tranquility, discord and serenity and this tussle between the two ends is what I identified as poetry. And I was always drawn towards poetry that deals with conflict-inner and outer conflicts. In her letter to Thomas Higginson, Emily Dickinson wrote “If I read a book [and] it makes my whole body so cold no fire can ever warm me, I know that is poetry.” For me, poetry is that which makes me terribly cold and equally warm-one cannot quell the other.

The experience of migration, the movement between languages, between geographical borders draws new definitions, perceptions and histories in human minds. Mediating these differences of the imagined and the unimagined, seen and the unseen, thoughts take shape in familiar and unfamiliar languages. Sylvia Plath was intimate to me, I internalised her through these polarities and her words nailed me in a way as no other poetry did. The knowledge that multiple identities and selves permeate migrant lives, dreams and longings, sacrifices and distant ambitions is now common. These identities were trapped in a woman’s body, a body wrapped in cotton sarees, a body learning to bake and cook in electric ovens, a body instantly moving towards corporate attire. This movement created selves that are contradicting and in conflict with each other; these selves occupy multiple worlds. The contours of words, the tongue that gave refuge to my soul all along became meaningless in this part of the world dominated by a single language of commerce. It had to be hidden beneath job interviews, the magic numbers of the stock market and my career in the finance industry. These worlds in which I partially erase one identity and create another and this process is a continuum as my travel between the spaces I inhabit is endless. Most of you would have heard the story of Sisyphus; he is cursed to repeat the same chore of pushing a boulder up the mountain and every time he rolls it towards the top, the boulder rolls back down. And Sisyphus brings it back up again. In the Myth of Sisyphus, Albert Camus equates Sisyphus’s labour with the absurdity of life, the same task being done over and over. And asks one question: whether to commit suicide or not. And he answers, “the point is to live” and says that Sisyphus is happy to spend his life pushing the boulder up.

In a way, immigrant life is defined by this crossing between the shores of diverse identities and tongues; one has to imagine that this is contentment, like the imagined pleasure of Sisyphus.

Unlike Sisyphus, for some, this fancied bubble breaks open and everything shifts abruptly; I was burdened by the pain of this persistent erasing and refashioning. My identity is interwoven in the discord between the terrains of finance, funds, words, silence, domesticity and tongues. How does one live between the pain of this deletion and the construction of one’s self? What does it mean to bear the form of a woman and the inheritance that comes with it from another land? This negotiation with my inner conflicts shook my world and gathered heavily on the threshold of words — words my fingers hold so tight that the wrinkles in my fingers have permanent scars. When I write about these scars, I guess it becomes poetry and yet I am not sure to be called a poet.

Tamil poetry has a very long, almost uninterrupted history from its classical past in which women writers have a continuous contribution; to speak at length and list their names would become an essay.

"Tamil women have explored sexuality, the body, caste, gendered oppression, dalit experiences, they have challenged existing ideologies on women and have claimed the public space that was denied to them."

Poetry of resistance, militant women’s poetry and Muslim women’s poetry from Sri Lanka in the context of war are important registries in contemporary Tamil literature. Modern Tamil poetry is no longer confined to India and Sri Lanka. It has become transnational, mostly because of the large scale migration of Tamils from Sri Lanka to the West and the consequent formations of large diasporas. The women’s anthologies parathal athan suthanthiram, mai by Udaru, and the anthology by Chelva Kanaganayakam, In Our Translated Word: Global Tamil Poetry, are perfect representations of the contemporary realm of Tamil poetry that showcases Tamil poetry in multiple strands written from diverse locations. The emergence of strong feminist/women’s poetry in Tamil Nadu, Sri Lanka, and in the diaspora mark contemporary Tamil poetry and it is a continuum.

It is in this backdrop that I can place my writings. When I began to pen my encounters, it turned into a poetic narrative of hands, spices, footprints and shadows that linger in folds of the clothes worn by women before me. Women inherited by me — puranic women, indigenous women, Sangam poetic women, women as they live their lives. Naturally, the poems accentuate womens’ every day inner turmoil in a subtle manner and convert them into a poetic zone of feminine existence. Although this is not entirely new to Tamil poetry, these poems depart from the rest by going back to reimagining historical/mythic Tamil/Indian women characters in the context of contemporary feminist light and struggles. The words spring from physical, psychological displacements and dislocations, and explore them through these women characters.

Their battles were almost similar, just separated by time and space, sometimes shrouded by silence and yet at times, they pierce through the ripped palm leaves.

What would you do
if you had two tongues in your mouth,1
asks Sujata Bhatt.

From the fragrance of sawdust
To the freezing cold that wires the hair,
Hauling the body that stumbles
in the white street
into winter clothes,
She reflects.

Just tongues?
My eyes bound to hers—
Clothes stuck to the sand of Amaravati’s riverbank,
The aroma of idlies layered with dark smoke,
What should I do?

As one tongue settles
in between the teeth with questions,
Another hides in the thick eyeliner.
A Native song unravelling
from a wooden flute
Disrupts the daily conversations of the cell phone:

I go near their house
They on the other hand have never come
And have never told me:
My brother, I know your ancestors.2

Where did the blue of the lake
Behind your house disappear?
The one peeping out from her eyes asks.
In the steaming of the cup at the teahouse
Dissipate water, colour, green, rice, frog, squirrel.
The four eyes never disappear.
As the golden chain tree’s flowers become veins in two eyes,
The wake of the slave ships flowing at the feet
of the dark body, curly-haired, wets two eyes.

I said,
my mother tongue burns in my kitchen every day.

The flat desk’s
Motionless papers
Dissolve into the air’s moisture
in the convergences and divergences
of this city’s streets.

Beneath chests, hips and backs
Wrapped with the skin of the city,
Dilapidated bridges, streets,
birds that crash to death on buildings,
hands burn in the inside of restaurants,

memories and their trickles,
dry on black winter clothes
and crystallize the frozen surface of the lake
into insoluble salt.

In another glass cubicle
across the road,
Tongues laced with salt and thirst
are strangled by nameless voices
and crushed in heated breath.

In the street
that halves both cubicles,
the blue cloud
that floats on car windows
slips into the door
at the touch of a button.

While waiting for the bus
and freezing in the cold,
the words that fly in the street
burn us with a coal-like warmth.

Fear-blanched faces shake
with the beating of the heart,
passionately held kisses;
all pass us by.

At the time
when paper roses in Christmas decorations
ooze over and fill the streets,
bleeding red into both glass cubicles
and making them one,

What would you say, Nappinnai3
To her who asks
Where you’re from?
of the banks of the gushing river of desire
of the heat of its proximity
of the other bank that frosts far away

Would you speak
of him
who becomes thirst on your tongue?

On the plucked stalk
unsure whether to wilt or bloom,
the bud stiffens.

The woman tending
the garden terrace at my place of work
Told me her wages for watering unfamiliar plants
while recollecting her memories
In unaccustomed English:

As bombs fell
dust that rises up
From people scattering
Penetrated my eyes,
Obscuring the path.
Treading through the midnight darkness,
We reached a shelter.

In the oil-less pan,
rosemary was cooking with sun berry leaves
I had found between the crevices of the cement wall.
I exchanged coriander with sugar,
To nurture our lives, which refuse to yield.
She continued,
her fingers covered with pot soil:

The ground grabbed from my feet,
that cannot now be reclaimed by anyone,
clings to the roots of spinach stalks
and herbs swelling in my palm.

As her wringing hands and moist eyelashes
uncover the rest of her experiences
lines of water descended from the sky
when my heart mellowed,
forgetting her pain momentarily,
trying to make a poem about
the smell of rain that is ostensibly the same
across the earth.

Drenched in the rain,
walking past me,
she said:
the smell of new cement
and aluminum sheets
that drink water is the same
in all cities as they become
home to refugees.

All poems translated by Vidhya Sreenivasan from the original Tamil.

The above prose text is from the acceptance speech given at the presentation of the SPARROW R.Thyagarajan award for poetry by SPARROW on December 21, 2019. First published in The Beacon.
Geetha Sukumaran is a doctoral student in Humanities at York University, Toronto. Her interests include contemporary Tamil poetry, women's writing, trauma literature and translation. She has published two books in Tamil: Tharkolaikkuparakkumpanithuli (Tamil translation of Sylvia Plath's poems, 2013), and her own poems, Otraipakadaiyilenchumnampikkai (The Hope that Remains in a Single Die, 2014). She is the recipient of the SPARROW R Thyagarajan award for her poetry.Vidhya Sreenivasan translates short stories and poetry from Tamil. She teaches English literature at Stella Maris College in Chennai, India.