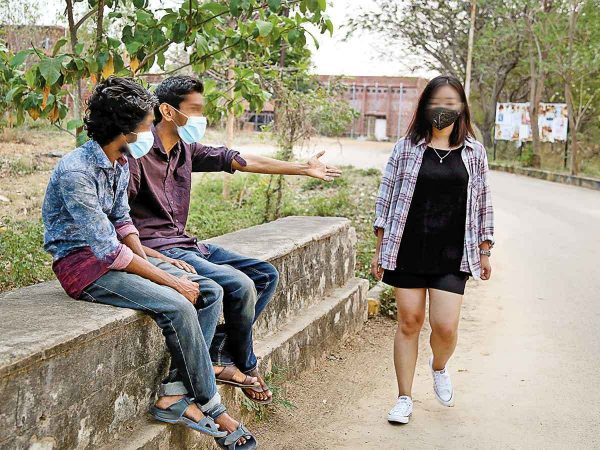 “No one is born hating another person because of the colour of his skin, or his background or his religion. People learn to hate, and if they can learn to hate, they can be taught to love, for love comes more naturally to the human heart than its opposite.” – Nelson Mandela

The coronavirus induced COVID-19, which has been declared pandemic by the World Health Organization (WHO), has created panic and a tensed environment around the country. However, the pandemic has also brought in various kinds of racial discrimination and behaviour towards the people belonging to the Northeast region.

It is very disturbing to see a country like India which is an epitome of cultural diversity and has a mutual coexistence of various religion, ethnicity etc. witnessing such racial discrimination and dehumanisation of people from the Northeast due to their Mongolian features.

It has to be kept in mind that although people are targeting them as carriers of coronavirus in the mainland, so far there have been only two cases of coronavirus found in the region of Northeast till this article is going to the press (one each in Manipur and Mizoram).

We also have to understand why we are targeting people with Mongolian features in such a hostile manner just because of a pandemic. During the 2009 flu pandemic (H1N1 influenza virus) around 1.4 billion people were affected and it originated in North America.

At that moment of time nobody judged the Western nations or termed it “American Pig Flu” but we are targeting Chinese and people with Mongolian features as the carriers of Coronavirus, and many have attributed this as “Chinese Virus” whereas WHO had issued a guideline in 2015 in an attempt to minimise negative impacts on trade, animal welfare and avoid causing offence to social, cultural, national, regional or ethnic groups.

The discrimination towards Northeast people in mainland India is not a new thing and has been taking place for a long time now. In the recent past, it was brought into mainstream news when a student from Arunachal Pradesh, Nido Tania was murdered brutally in New Delhi because of racial discrimination in 2014. 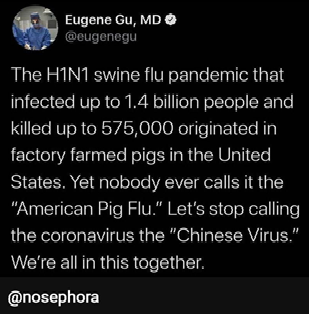 “Racist incidents of North-easterners being targeted recently in many parts of India — from Bengal to Maharashtra to Delhi — should not be understood as an effect produced by the pandemic coronavirus. Racism has existed prior to the arrival of the pandemic and is now being brought to the fore. This is yet again a reminder that crisis situations amplify already existing social hierarchies”, says a senior Guwahati-based expert.

As the whole country observed Janata Curfew on the 22nd March 2020, a girl from Manipur was racially discriminated, humiliated, abused and spat upon by mainlanders in New Delhi. On March 3, a woman from Northeast has alleged that she and her friend were hit by water balloons and called ‘Coronavirus’ by two men on a bike near Delhi University’s North Campus. The incident was reported to have happened near Kamla Nagar. Following a police complaint, an FIR was registered.

Ever since the outbreak of Covid-19 in India, many cases of discrimination have been reported from places like Pune, Mumbai, Kolkata, parts of Punjab, Mysuru and Ahmedabad. The cases range from publicly calling names, addressing people from NE as "coronavirus", asking them to vacate rooms, sending them to forceful quarantine centres to physical assault as it’s reported from Kolkata.

On March 17, 2020 Lok Sabha MP Mr Tapir Gao had urged the Centre to issue an advisory to all the states of the country against the alleged racial discrimination against the people from North-eastern states. However, when he was addressing Parliament his fellow parliamentarians were seen laughing and they were ostensibly mocking about the situation in the Parliament.

Unfortunately, this has been perceived by many as the social reality persisting in the society. Many, especially netizens from the region thought when people representing the country are sitting in the Parliament and laughing about it, how far will any actions be taken to control such discrimination?

Presently, except New Delhi, there are hardly any Northeast Help Cells available to provide assistance to the people of region facing discrimination in parts of the country. Being in a small minority, it’s difficult for them to raise their voices too. In many cities students’ bodies from Northeast are active to play supporting role for the victims. But they cannot cover each and every such case.

After spurt of discriminatory incidents across the country the Home Ministry has issued a notification asking all the states to look into such cases on the March 21, 2020. In a letter to chief secretaries of all states and Union territories, the ministry said it had come to its notice that people from the Northeast have been facing harassment after the occurrence of the deadly COVID-19 in the country.

The only way some cases are being heard are through people who are being vocal in social media and the victims who are capturing videos of the live event and streaming in the online platforms. These are then shared by some well-known personalities (mostly from northeast region) asking the competent authorities to look into such matters. There are many cases which are not reported and many victims are not escalating the cases of discrimination simply to avoid police and not antagonising neighbourhoods. 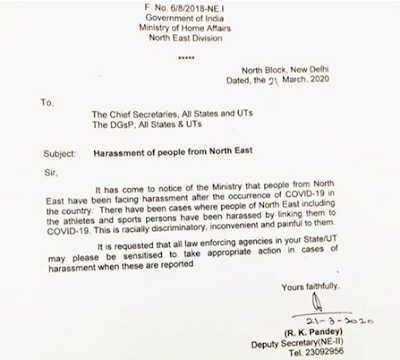 In 2012, the Ministry of Home Affairs had mandated all the states and union territories to penalise anyone who commits an act of atrocity against people from the region under the Scheduled Castes and Scheduled Tribes (Prevention of Atrocities) Act. However, many potential target communities (like the Ahoms, Gurkhas, Meiteis and many more communities with Mongolian features) do not come under Schedule Caste or Scheduled Tribe category.

The latest incident on the March 28, 2020 at Mysuru wherein two youths from Nagaland were denied entry into a supermarket store is testimony of the fact that only Government Regulations are not going to eradicate this social menace.

This is a sad reality that Indians are feeling unsafe in their own country because of such bigotry, prejudice and stigma in the society. One must remember that the victims in such cases are mostly youths, workers and students stuck thousands of kilometres away during the national lockdown without any option to return to their native places. They are also struggling for their livelihoods. Discrimination towards them only adds to their existential misery.

First published in Counterview.
Disclaimer: The views expressed in this article are the writer's own, and do not necessarily represent the views of the Indian Writers' Forum.