Failed lockdown: Devastating the poor, weakening the fight Against COVID-19 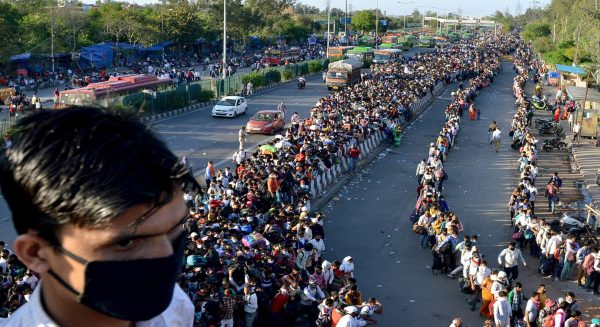 The tragic pictures of migrant families walking hundreds of kilometres to their villages are now there for all to see. For them, the alternative was to either stay and starve, or make the perilous trek back to their villages. As they are saying, the coronavirus may kill us, but if we stay without food, hunger surely will. Is this a catastrophe that should have been anticipated, but was not? Why didn’t the government see that this would happen? Particularly, as people thronged stations and depots, leaving for home even before the “janata curfew” on March 23? Do we conclude that the government and its officials – including the PM – completely forgot the poor while crafting the lockdown policy?

The long columns of migrants leaving cities and towns are visual confirmation of how the 21-day lockdown has already failed. A large-scale migration of people during the lockdown will only spread infections rapidly across the country. Meanwhile, food and other supplies are drying up as supply chains are slowly coming apart under pressure.

The PM had nothing to offer to migrants except his apologies. There was no talk of providing food, or opening the Food Corporation of India’s godowns for them. Instead, instructions have been issued to the district administration under the Disaster Management Act to stop all movement of migrants.

Yes, a successful lockdown would have helped snap the chain of transmission and slowed down the spread of the novel coronavirus or SARS-Cov-2. This might have bought us some time. But, with no preparation for the lockdown, no warning to the state Chief Ministers, no support to the poor—the bulk of India’s population—the lockdown has failed. A good plan is as good as its implementation. Otherwise, it becomes a Tughlaqian venture, with the state losing control and authority.

So, the question is: What do we do now? There are the obvious answers – provide immediate help to the migrant population so that they can go back home; provide them food and shelter on the way; appeal to others to stay back in the cities and towns. Simultaneously, make urgent arrangements to reach food, rations, fuel, water to the poor localities; open food kitchens with delivery facilities; arrange money transfers immediately to peoples Jan Dhan and MGNREGA accounts. Strengthen the supply chain, not only for food, but also for medical supplies; masks, personal protective gear required by hospital staff; and ventilators for those seriously ill.

Kerala has already shown what a government can and should do. Some other states have begun implementing various measures. Can the centre provide urgent support to the state governments as they go about their tasks? Can the PM, as some on social media have been saying, go beyond being ‘8PM’?

We need to know the situation on the ground to fight the epidemic. This is what Tedros Adhanom Ghebreyesus, Director-General, WHO, said in his press conference ten days ago:

“You cannot fight a fire blindfolded” he said, underscoring the importance of testing every single case. “We cannot stop this pandemic if we don’t know who is infected.

We have a simple message for all countries: test, test, test.”

This is what is scary about our current situation. We are fighting a fire with our eyes closed. In spite of knowing that a pandemic was in the offing, the Indian Council of Medical Research (ICMR) procured a very limited number of kits and had low testing capacity. By March 6, ICMR’s press release indicates that they had tested only 3404 individuals. India had tested 13,486—or only 10.5 per million people—by March 20, and was among countries with the lowest rate of testing in the world. If we take the latest figures available on the ICMR website, 26,798 people have been tested as on March 27 (ICMR gives a higher number for tests but tests are not the same as number of people, as one person may require more than one sample to be tested), our testing rate is still only 21 per million people. Compare this to South Korea testing 6,148, Iran at 957, Vietnam 159 tests per million (Figures as on March 20).

After the fiasco of an inadequate number of test kits, we now hear bravado from the Ministry of Health and Family Welfare about stepping up our testing capacity. Yes, a number of test kits are being procured, and a number of companies are being licensed to manufacture and distribute tests. But, all of that is for the future. We have already lost precious time, having sat on our hands for the last two and a half months.

Permitting private laboratories to test, does not help in controlling the larger epidemic. At Rs 4,500 per test, no poor family can afford to get themselves tested.

ICMR and the Ministry of Health are taking the usual route: floating tenders, asking parties to quote etc. They also claim that they have procured tests from the US. We can only hope that these are not the CDC tests that failed disastrously in the US.

To know how the pandemic is progressing, we need to ramp up our testing by an order of magnitude. The fact that India has a low number of infections compared to many countries is meaningless unless we have tested a significant number of people. The low infections may simply be the consequence of the very low number of tests that we have conducted.

Diagnostic tests that rely on taking nasal and throat swabs and test for the presence of a virus gene sequence may not suffice to scale up quickly. We can perform antibody tests quickly, and at lower costs, to give us more data about how many undetected infections exist in the population. These tests are cheaper and can be scaled up much faster. This should not be thought of as an alternate to gene sequence tests, but as a quick way to test a large number to see whether there has been a significant community spread.

The second part of handling of the epidemic is addressing the hospital crisis we are soon going to face. If protective gear is not available—either in quantity or quality—we will see hospital infections becoming new centres of the epidemic. It is what happened in Italy. The lockdown is going to seriously affect the movement of equipment we will desperately need as the epidemic progresses to protect hospital staff and ensure that hospitals do not become centres of infection.

The Ministry of Health and Family Welfare and ICMR have been very cagey with the results of random testing of those who were admitted to hospitals with serious respiratory distress or influenza-like illness. What did the results show? Was a significant percentage found infected with SARS-Cov-2? Without numbers, we have no way to know and tell.

The other imponderable is whether the lockdown stabilises despite the initial mess the government has created. That will depend on the government’s ability – or will – to address the acute problems the poor are facing. Otherwise, the government’s credibility will erode, making it impossible for the state to impose its will on the people. And for the state to retain its credibility, it has to provide food, maintain all essential supplies, make the medical system, including hospitals, function. And as the DG, WHO says, test, test and more tests.

Instead of bailing out capitalists, it is time the Modi government looks at the needs of the Indian people. The government has to forget about fiscal responsibility – read fiscal conservatism and keeping international finance capital happy. It has to commit far more than the miserly Rs 1.7 lakh crore that Finance Minister Nirmala Sitharaman has committed. A large part of this is only window dressing: changing heads or clubbing existing expenditure under the new COVID-19 header. Just to get over the current crisis, we need at least three times more over the next three months.

This is the acid test for the Modi government. Do they even have the poor in their radar? Or is their focus only the middle-class? Unfortunately, the virus—SARS-Covid-2, is quite egalitarian. It does not respect class.