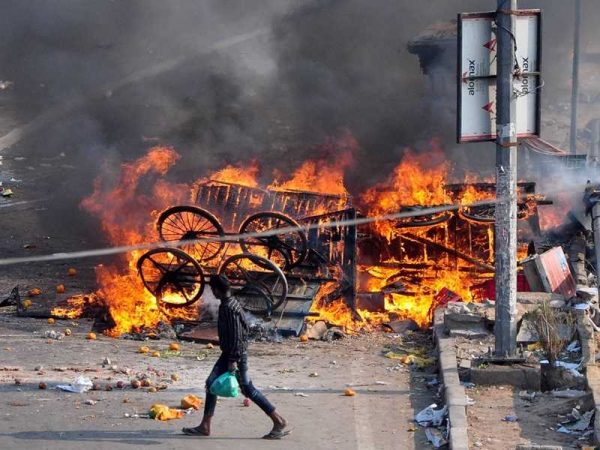 They say ‘history repeats itself first as a tragedy and then as a farce’. In case of India, communal violence not only keeps repeating itself, the pattern of the tragedy keeps changing every next time. Some features of the violence are constant, but they are under the wraps mostly. The same can be said about the Delhi violence (February 2020). The interpretations, the causative factors are very discernible, but those who are generally the perpetrators have a knack of shifting the blame on the victim community or those who stand for the victims.

As the carnage began presumably in the aftermath of statement of Kapil Mishra of BJP, which was given in front of a top police official, in which he threatened to get the roads emptied. The roots of violence were sown earlier. The interpretations given by the Hindu Nationalist camp is that the riot is due to the changing demographic profile of the area with Muslims increasing in number in those areas, and coming up of Shaheen Bagh which was presented was like ‘Mini Pakistan’. As per them the policies of BJP in matters of triple talaq, Article 370 and CAA, NPR, NRC has unnerved the ‘radical’ elements and so this violence.

As such before coming to the observations of the activists and scholars of communal violence in India, we can in brief say that violence, in which nearly 46 people have died, include one from police and another from intelligence. Majority victims are Muslims. The violence started right under the nose of the police and the ruling party. From the videos and other eye accounts, police not only looked the other way around, at places it assisted those attacking the innocent victims and burning and looting selective shops. Home minister, Amit Shah, was nowhere on the scene. For first three days the rioters had free run. After the paramilitary force was brought in; the violence simmered and slowly reduced in intensity. The state AAP Government, which in a way is the byproduct of RSS supported Anna Hazare movement, was busy reading Hanuman Chalisa and praying at Rajghat with eyes closed to the mayhem going in parts of Delhi.

Communal violence is the sore point of Indian society. It did begin during colonial period due to British policy of ‘Divide and Rule’. At root cause was the communal view of looking at history and pro active British acts to sow the seeds of Hindu-Muslim divide. At other level the administrative and police the British were fairly neutral. On one hand was the national movement, uniting the people and creating and strengthening the fraternal feeling among all Indians. On the other were Muslim Communalists (Muslim League) and Hindu Communalists (Hindu Mahasabha, RSS) who assisted the British goal of ‘divide and rule’ promoting hatred between the communities. After partition the first major change was the change in attitude of police and administration which started tilting against Muslims. Major studies by Dr. Asghar Ali Engineer, Paul Brass and Omar Khalidi demonstrated that anti Muslim bias is discernible in during and after the riots.

Now the partisan role of police has been visible all through. Sri Krishna Commission report brought forth this fact; as did the research of the Ex DIG of UP police Dr. V.N.Rai. Dr. Rai’s studies also concluded that no communal violence can go on beyond 24 hours unless state administration is complicit in the carnage. In one of the violence, investigation of which was done by concerned Citizen’s team (Dhule, 2013) this author observed that police itself went on to undertake the rampage against Muslims and Muslim properties.

General observation about riots is that violence sounds to be spontaneous, as the Home Minister is pointing out, but as such it is well planned act. Again the violence is orchestrated in such a way that it seems Muslims have begun the riots. Who casts the First stone? To this scholars point out that the carnage is so organized that the encircled community is forced to throw the first stone. At places the pretext is made that ‘they’ (minorities) have thrown the first stone.

The pretexts against minorities are propagated, in Gujarat violence Godhra train burning, in Kandhamal the murder of Swami Laxamannand and now Shaheen bagh! The Hindu Muslim violence began as riots. But it is no more a riot, two sides are not involved. It is plain and simple anti Minority violence, in which some from the majority are also the victims.

This violence is possible as the ‘Hate against this minority’ is now more or less structural. The deeper Hate against Muslims and partly against Christians; has been cultivated since long and Hindu nationalist politics, right from its Shakhas to the social media have been put to use for spreading Hatred. The prevalent deeper hate has been supplanted this time by multiple utterances from BJP leaders, Modi (Can be recognized by clothes), Shah (press EVM machine button so hard that current is felt in Shaheen Bagh), Anurag Thakur (Goli (bullet) Maro) Yogi Aditya Nath (If Boli (Words)Do not work Goli will) and Parvesh Varma (They will be out to rape).

The incidental observation of the whole tragedy is the coming to surface of true colors of AAP, which not only kept mum as the carnage was peaking but also went on to praise the role of police in the whole episode. With Delhi carnage “Goli Maro” seems to be becoming the central slogan of Hindu nationalists. Delhi’s this violence has been the first one in which those getting killed are more due to bullets than by swords or knifes! Leader’s slogans do not go in vain! Courts the protectors of our Constitution seem to be of little help as if one of them like Murlidhar Rao gives the verdict to file against hate mongers, he is immediately transferred.

And lastly let’s recall the academic study of Yale University. It concludes; BJP gains in electoral strength after every riot’. In India the grip of communalism is increasing frighteningly. Efforts are needed to combat Hate and Hate mongers.

First published in Countercurrents.
Ram Puniyani was a professor in biomedical engineering at the Indian Institute of Technology Bombay, and took voluntary retirement in December 2004 to work full time for communal harmony in India.