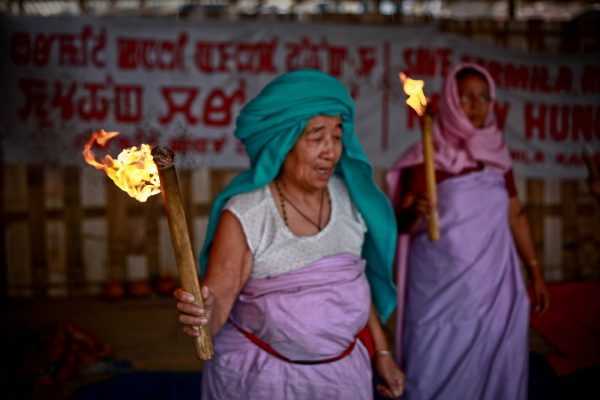 In India’s Northeast, women enjoy relatively greater freedom when it comes to mobility in public spaces and absence of customary external manifestations of subordination such as the purdah, and the practice of dowry, making the social status of women appear  almost equal to that of their male counterparts. While this is true to an extent, a closer examination at the status of women in the Northeast shows that women cannot be considered all that equal to men in social, economic and political spheres of the region.

What’s known as India’s “Northeast” constitutes a very large area and the geographical extent of it is often times too contested. Indu Agnihotri, Director of the Centre for Women’s Development Studies (CWDS) says, “Northeast India is a land of diversity in terms of complexity, culture, society, geographical richness and many more. The region is so diverse that the present understanding does not cover the subtleties of its diversity. She added, “Most of the understanding on Northeast has been by the prism of hyper-nationalism and security. But there is so much more than what the present narratives have to offer”.

The Northeast contains within itself multiple cultures, societies and traditions, each different from the other in many respects. Every culture in the Northeast has its own set of tools of social control, out of which patriarchy seems to be the most prevalent.

In Arunachal Pradesh, while an Arunachali man is free to marry any woman of his choice and acquire the status of a “Arunachal Pradesh Scheduled Tribe” (APST) status to his children, questions are raised on the APST status of children born to an Arunachali mother and a Non-Arunachali father, denying these children the privileges that come with the status. Similarly, the “Sikkim Subject” (a document attesting a person's identity as Sikkimese) is denied to children born to a non-Sikkimese father and a Sikkimese mother. All of these instances indicate how patriarchy is used in the Northeast to control both the sexuality of women as well as put restrictions on her freedom to choose her spouse. Even in Meghalaya, with a matrilineal set-up in place, final decisions with respect to resource allocation in a family is taken by the maternal uncle, despite women being the custodians of family properly. Due to this, the society remains under the patriarchal influence, exposing the flaws in the system, that is in fact not as empowering as it seems to be.

There are many traditional cultural practices in the region that have worked to the disadvantage of women. “As a society gets more “Hinduised”, they become more conservative” observed Monisha Behal, Founder of Northeast Network. Citing that even though the practice of “Tuloni Biya” in Assam (ceremonially symbolic to a wedding – celebrated seven days after a girl attains her puberty) has undergone significant changes over the years and is almost on the verge of decline, Behal added that it still continues to be a ritual silently practiced in many families in Assam, thereby actively imposing many restrictions on adolescent women during the time of the attainment of puberty.

Although active engagement of women in politics at the grassroots exists, as one moves upwards in the political ladder, the number of women holding prominent positions in key decision making processes is quite negligible. “In the past, I had discovered that funds meant for women’s development were misused for miscellaneous purposes. For instance when men held meetings for women empowerment, it would be the fund that would be used for refreshments, fuel to take the men to and fro and so on’ said Monisha Behal. “At the same time, while some women continue to participate actively in  political processes, they are rarely encouraged to enter the political fray. Incidents such as the Naga Hoho (tribal bodies in Nagaland) opposing municipal elections with that offered 33% reservation for women, and later burning the houses of women who had dared to stand up for municipal elections bear testimony to how their patriarchal mind-set restrict women’s political emancipation” she added.

Economic emancipation is another key area where women in the Northeast lag behind their male counterparts. Apart from her active contribution in the household, women are often the breadwinners in some families in the Northeast. This role starts early in poor households. Recalling an incident where she had united an illegally trafficked young girl back with her family in Assam, Behal told the Indian Cultural Forum that the girl  was forced to go back to work, by her parents, as a maid to provide for her family. Behal went on to say how women, despite being breadwinners, continue their lives of subordination within their own families.

Witch hunting in many parts of rural Northeast is no longer about superstition, but about an organised crime. Often conspiracies are hatched against a single woman due to rivalry or jealousy. She is then held responsible for crop failures, natural calamity, and loss of property or any other illness. In 2015, Assam passed the Witch Hunting (Prohibition, Prevention and Protection) Bill, but activists say this still has a long way to go in eradicating the practice.

Agnihotri said “While the Manorama incident in Manipur and the resistance put forth by women made the government rethink about how the Armed Force (Special Powers) Act (AFSPA) was not only used as a weapon of sexual exploitation of Manipuri women, but also how such draconian legal provisions and laws offer impunity to the armed forces, under the garb of “security”. “However”, she added, “we still have a long way to go in fighting sexual violence against women in the Northeast”. The state of Assam for instance, tops the list of crime rate against women- it stands at 166 per lakh population  according to latest NCRB data. The national average is 58. This is alarming and these crimes include domestic violence, cruelty by husband or relatives, acid attacks, human trafficking, sexual harassment and rape.

Emphasising the importance of economic independence, Behal said, “Access to productive work and earning from it is central to achieving women’s rights and mobility. Economic empowerment gives women greater bargaining power, thereby giving them greater accessibility to participate equally in decision-making processes, whether in the home or in local governance. Greater control over productive resources access to skill development and opportunities create spaces for women to gain employability and considerable control over their own time. These are the fundamentals required for women to raise their voices for their meaningful participation in society at all levels along with their male counterparts.