How is NPR different from the Census? 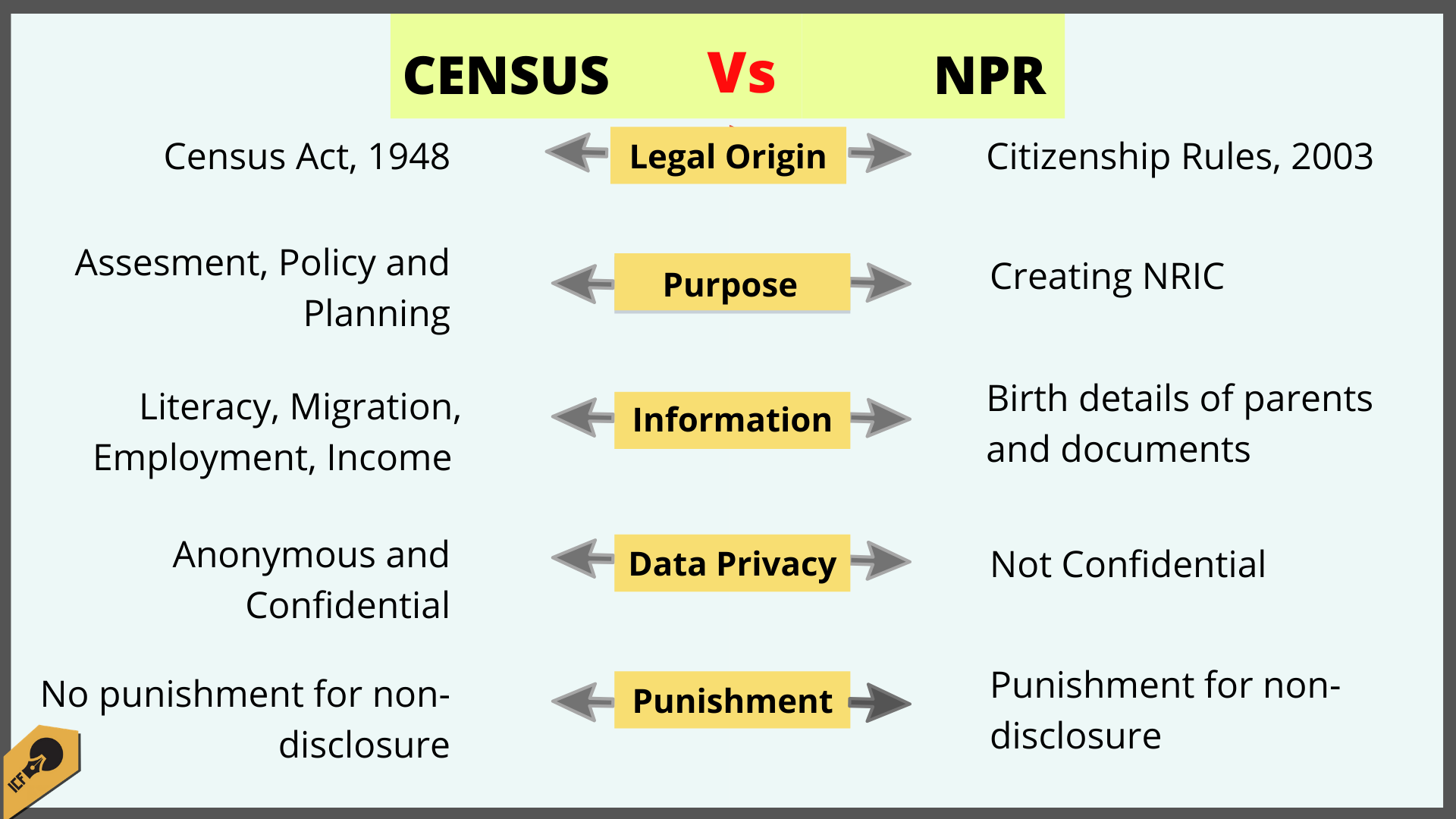 The collection of data for the National Population Register (NPR) begins in April 2020, with the house-listing phase of the Census. There has been much confusion about whether the two exercises are the same. In fact, while chief ministers of some state governments have stopped the process of National Population Register (NPR) as it may lead to NRC, others such as Maharashtra chief minister, Uddhav Thackrey, has made a statement that ‘NPR is a Census.’

The confusion arises partly from the government’s decision to conduct both the exercises together, from April 2020 to September 2020. And thoughthey are completely different — in purpose and origin — NPR and Census there has been an attempt to pass them off as “similar” or the “same”. Conflating the two processes has been part of the government’s efforts to evade larger questions about NPR-NRIC.

How are the Census and the National Population Register (NPR) similar?

Both NPR and Census require a door-to-door data collection. The data collection for the Census is called the house-listing phase. During the house-listing phase, an enumerator appointed by the government goes to every house of a town/village or area assigned to them and collects information about every individual. According to a September 2019 notification of the Home Ministry, the enumerators appointed for Census will also update the NPR.

However, apart from the requirement of house to house data collection, there are hardly any similarities between Census and NPR.

How are the Census and the National Population Register (NPR) different? The main points of difference are legal origin and purpose; information and data privacy; and punishment.

The population census is carried out by the Government of India once every ten years. The process began for the first time in 1872 when India was still under colonial rule. The Census is carried out under the Census Act, 1948. The data collected for Census gives a demographic and socio-economic picture of the population of the country. The purpose of collecting and analyzing Census data is that it informs planning and policy, and helps in assessing the impact of existing government policies.

As opposed to this, theexercise of creating and maintaining a National Population Register began in the year 2010. NPR is conducted under the Citizenship (Registration of Citizens and Issue of National Identity Cards) Rules, 2003 issued following the 2003 amendment to the Citizenship Act, 1955. The sole purpose of compiling the NPR is to create NRIC. The data collected during NPR is used for determining citizenship during verification. NPR is the first step to make the NRIC.

The information obtained during Census can help for inclusive planning and policy decisions. The NPR-NRIC exercise, in its very intent, seeks to discriminate and exclude.

The Census questions aim at getting details on literacy, employment, residence, migration, marriage, income etc. The NPR information includes demographic as well as biometric details. The new question in the NPR 2020 form seeking the details of birth of parents is particularly related to determination of citizenship. Apart from details of birth, the new form also seeks details such as AADHAR card number, Passport, PAN card number, and Voter-ID. This would create a centralised database with the personal information of every person easily available for mass surveillance. This is particularly worrisome because the data collected will be at severe risk.

There are no penal consequences if a person fails to provide certain information during census data collection. However, non-disclosure of a particular information in NPR can lead to penal action. The head of the household has a legal obligation to give correct information about every person, and failure to do so would lead to a fine.

The census and updation of NPR will be carried out through mobile-based applications. This adds to the concerns of data privacy;and it poses the risk of collecting data without the informed consent of an individual.  Although questions sought for thecensus differ from the NPR questions, some questions overlap. During enumeration the individual may not know which question she is answering or where the information has been recorded as this will be done through the mobile based application. This appears like an organised plan to fool every person into giving information that can help determine citizenship.