Are NPR and NRC related? 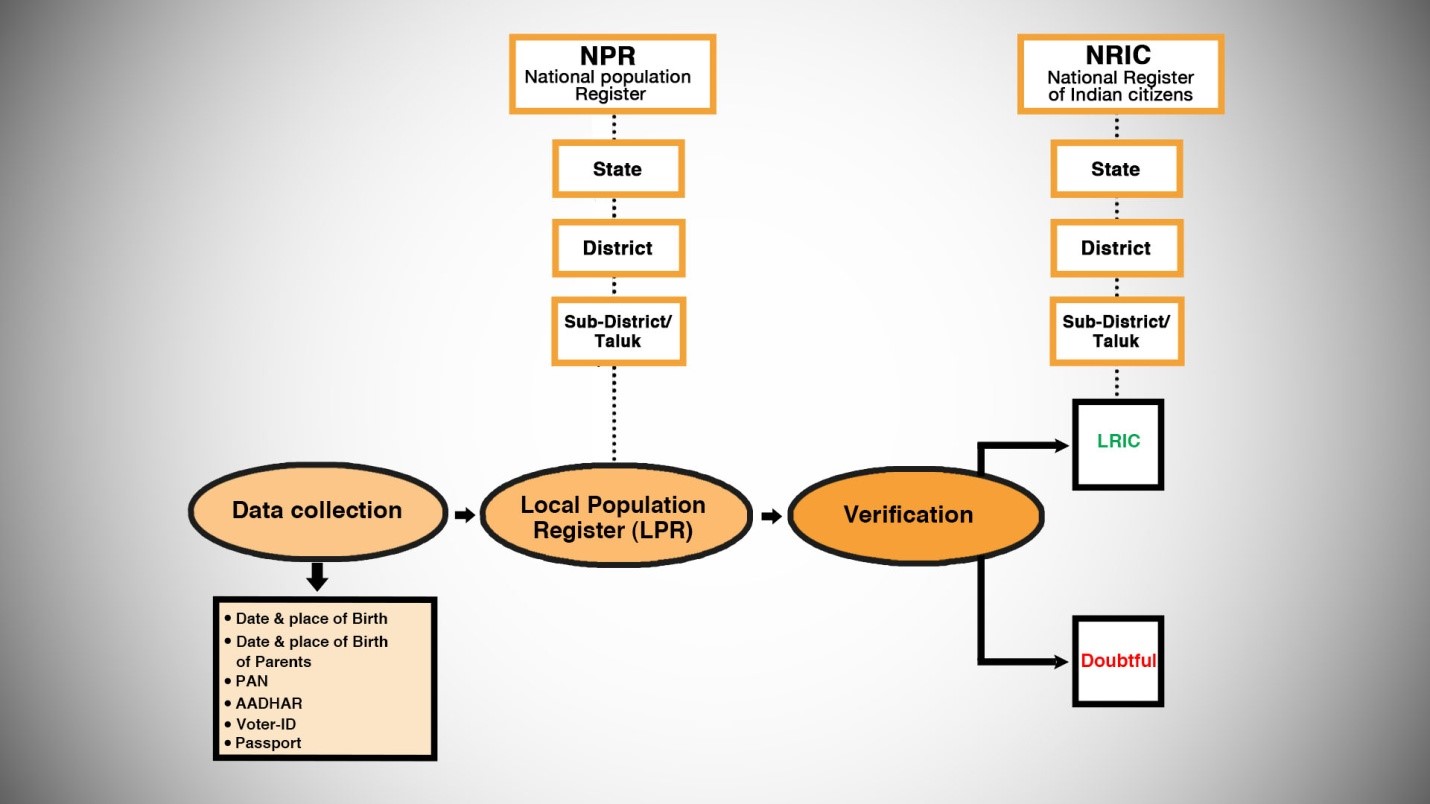 For more than a month now, India has seen widespread protests against CAA-NPR-NRC. But the government has not budged from its position on NPR starting from April this year. The only “concession” the government has made on NRC: the NRC has not yet started; its rules are yet to be framed; then why are people agitating against the NRC? This is an attempt to fool the people. The graphic above shows the link between the NPR and the NRC. It shows us that the NRC process begins with the NPR.

We have many important questions about NPR, NRC and CAA. Where do NPR and NRC originate from?

What is the relationship between NPR and NRC?

Following the 2003 amendment, rules were issued in December 2003 to lay down the procedure for compiling the NRIC after creating the National Population Register. The National Population Register or NPR was mentioned for the first time only in the rules. The rules also established a clear link between NPR and NRIC. The NRC begins with a register of residents—the population registry; out of which a citizenship registry—a registry of all Indian citizens—will be created. This process of “moving” the people from the local population registry to the local citizenship registry is the key issue. Questions related to the place and date of birth of the resident, her/his parents will be asked and “evaluated” by the local register, an official at the lower level of the local administration. It is this person who will then transfer people to either the local registry of citizens or to a doubtful category.

The underlying premise this process of creating a citizenship registry is that each and every person residing in India will have to prove their citizenship. The state/government has no responsibility in this respect; the entire responsibility of proving they are Indians is on the 135 crore people who are in India. And if they can’t, they have to prove that they are not illegal immigrants.

The process of compiling NPR

The process of compiling NPR begins with preparing a Local Population Register (LPR). The first stage in preparation of the LPR is data collection. The rules state that a population register has to be prepared by collecting information about every person residing in a local area (town, ward, village etc). For this purpose, the central government can carry out house to house enumeration. The process thus starts with an enumerator going to every house to collect information.

NPR was last prepared in 2010. The questions in the NPR form include details such as name, date and place of birth, nationality, permanent address. In September 2019, the government issued a notification stating that NPR will be updated with the house-listing phase of Census which begins in April 2020. Some new questions have been added to the NPR 2020 form. The most important questions are: date and place of birth of parents, details of documents such as AADHAR card number, PAN card number, Voter ID and Passport and mobile number. The Aadhaar provides the biometric verification of the resident.

The purpose of preparing the population register is to ascertain the citizenship of every person. This is evident from the new questions added to the NPR form. The details of the birth of parents are directly related to determining citizenship in India. The data collected by the enumerator is collated to form a Local Population Register.

The relationship between NPR and NRIC

After the compilation of Local Population Register, the process of making the National Register of Indian Citizens (NRIC) begins. The relationship between NPR and NRIC is at the local level and not the national level. Verification is what connects the two. The rules state that the data in the local population register has to be “verified and scrutinized” before it is entered into the local register of citizens, which is the smallest unit of the NRIC.

A person who qualifies the verification process will be added to what is called the Local Register of Indian Citizens (LRIC). A person who fails to qualify the process will be identified as “doubtful”. Anyone marked doubtful will have to go through a further process of proving citizenship at the foreigner’s tribunal and higher judiciary.

What will verification involve? What will be the criteria to exclude some people as “doubtful citizens?” The rules that lay down the procedure for NPR and NRIC are silent about the verification criteria. This silence, accompanied by the high decibel campaign against “infiltrators” and changing the definition of illegal immigrant in 2019 to only mean Muslims from neighbouring countries, has led to the question, is this entire process being created to deny citizenship rights to a section of Indian people?