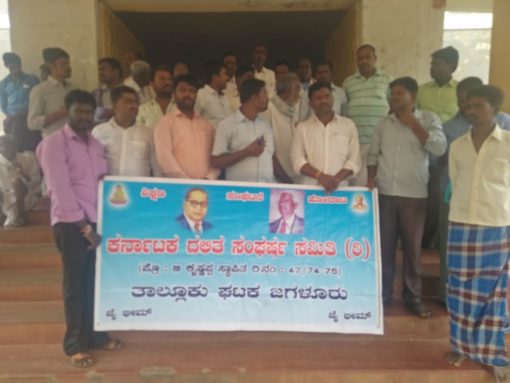 On June 3, Pratap, a dalit man was paraded naked. The incident occurred in Shyandrahalli village in Gundlupete taluk of Chamaraj Nagar in Karnataka. He was being punished for having polluted the village temple by entering it. The incident came to light only on June 11, when the video was shared on the internet and went viral.

Pratap, who grew up in extreme poverty, had managed to attain a graduate degree by sheer grit and hard work. He was also an IAS aspirant. A day before the fateful incident, he had gone to Marimallappa Higher Primary School to take the exam for the Union Public Service Commission (UPSC). However, when he had reached the exam centre he was not allowed to write the exam. Taken aback, he spent some time in Mysore and then decided to ride back on his motorbike to Gundlupet.

His bike broke down the same night in Raghavapura. It was then that he was attacked and robbed by a few thugs. Shocked and frightened, Pratap decided to spend the night there. At around 06:00 AM, he took shelter at the Shanimahatma temple in Veeranapura gate. The temple priest, who was present there, questioned him about his whereabouts, further intimidating Pratap.

Meanwhile, the villagers had assembled near the temple and started questioning him about his background. Soon they learnt that he belonged to the ‘Holeya’ community which falls under the Scheduled Caste category. This was enough to trigger the upper caste people present there into action. Pratap was verbally abused, while being called “son of a lower born, son of holeyas, you have polluted the temple”. He was then reportedly tied up to a coconut tree and beaten up.

Pratap stood helplessly, begging for mercy, to which the priest announced, “This is the chance to teach a lesson to these Holeyas. They have no right to touch our temples.” Hearing this, the enraged villagers started beating Pratap with anything they could lay there hands on. They tore off his clothes, stripping him naked and tied his hands at his back. He was then paraded naked while being whipped in broad daylight from the temple till the Ooty-Mysore highway.

This yet again proves that the gruesome, inhumane caste-system is still alive even as India is pretending to be drowning in the ocean of modernity. It is quite painful to see where we are headed when we learn that there was not a single soul who felt the need to protect Pratap or stop the violence being meted out to him.

As it happens in most of the atrocity cases, the police have not filed an FIR. Efforts are being made by the casteist forces within the police department to cover up the case instead. It is shocking to learn that the villagers have filed a complaint against Pratap saying that he is mentally ill and have accused him of attacking them.

This incident is a violation of Article 17 of the Constitution, which abolishes untouchability. The issue has not even been taken up by the media channels. As soon as the video went viral, dalit organisations staged protests across the state. Under pressure from these protests, the police finally has registered a case under the Scheduled Caste and Scheduled Tribe (Prevention of Atrocities) Act, IPC section 143 (Unlawful Assembly), 147 (Rioting), 395 (Dacoity), 323 (Voluntarily Causing Hurt), 342 (Wrongful Confinement) and 509 (Intention to Insult the Modesty of a Woman).

Pratap, who had dreamt of being an IAS officer, is now traumatised by the brutality of the casteist mindset. He is struggling for his life after being admitted to a private hospital in Mysore.

“The roots of untouchability lies in the caste system. The roots of caste system is in varna system. The roots of varna is in political power,” these words of Dr Babasaheb Ambedkar are being proven right today. Today the world is looking down upon India and India is ashamed. The atrocities against dalits is nothing new, but the ways in which dalits are being murdered, punished, abused have changed and today they have taken even more gruesome forms. The world is now disgusted with the violation of rights and loss of humanity in the country.

Read More:
Atrocities Against dalits Continue Unabated in Gujarat
Why the March of Secularism in India Has Not Been Smooth
No Place for Dalits in ‘New India’?

Co-published with Newsclick
Huchangi Prasad is a Kannada writer and activist. He currently teaches at the Government First Grade College, Devanagere, Karnatka. He is also the recipient of the 2019 Indian Writers Forum Young Writers Stipend.