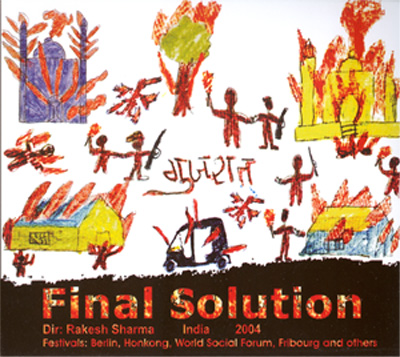 Last week, filmmaker Rakesh Sharma released his award-winning documentary Final Solution (2004) on Vimeo. Originally released in 2004, the film documents the communal violence that broke out in Gujarat during 2002-2003, specifically the pogrom against Muslims. Shot in two parts, the film follows the aftermath of the carnage and records in great detail, the exploitation of the Godhra incident during the then Chief Minister Narendra Modi’s electoral campaign.

Speaking to The Hindu, Sharma said that he was prompted by requests to make the film accessible for viewing after an old interview of his suddenly went viral a few weeks ago.  His decision to release the film at this time is also an attempt to give the first-time voters a “chance to dip into the past”.  “With the kind of propaganda we’re looking at — through the Modi biopic, the web series, NaMo TV, through all sorts of other video forwards happening on WhatsApp — I felt that however small, there is the need for a counter-narrative to also be there. Otherwise, people tend to think what they’re being bombarded with is the only reality.”

On February 27, 2002, a train filled with Hindu pilgrims returning to Gujarat from Ayodhya after a religious ceremony at the site of the demolished Babri Masjid was stopped at Godhra station. Within fifteen minutes, coach S-6 of the train was allegedly set ablaze by Muslims, causing the deaths of fifty-nine Hindu karsevaks. The pogrom against Muslims was claimed to be the Hindu fundamentalist groups’ response to this incident. The film reconstructs, through eyewitness accounts, the attacks on Gulbarg and Patiya (Ahmedabad) and acts of barbaric violence against Muslim women at Eral and Delol/Kalol (Panchmahals) even as Chief Minister Modi traversed the state on his Gaurav Yatra. The film studies and documents the situation months after the elections to find shocking faultlines – voluntary ghettoisation, segregation in schools, formal calls for an economic boycott of Muslims and continuing acts of violence.

The movie was initially banned in India in 2004 for fear that it might provoke communalism and radicalism. The ban was lifted in October 2004 after a sustained campaign which included, an online petition, hundreds of protest screenings countrywide, multi-city signature campaigns and dozens of letters to the Government sent by audiences directly.

Part 1 and Part 2 of the film can be watched below.

Read More:
Documentary in the Age of Modi: Anand Patwardhan’s Reason is out on YouTube
“Rewriting history with the focus on Hindu First”
More than 200 Writers Appeal to Citizens