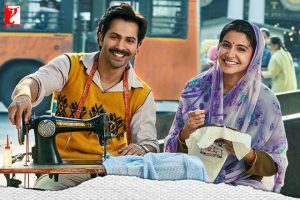 Sui Dhaaga: Made in India.
Image Courtesy: The Financial Express

Last year, on the occasion of Gandhi Jayanti, actors Anushka Sharma and Varun Dhawan released a special-teaser video of the film, paying tribute to Mahatma Gandhi and revealing details about the film’s subject. Varun Dhawan had also earlier told news agencies that, “from Gandhiji to Modiji (Narendra Modi), our country’s leaders have always endorsed the mantra of Made in India,” and therefore, their “story of self-reliance” would “connect to the grassroots level with every Indian.” It is 2018, and grand essentialist narratives that connect with every Indian are a hoax. A practitioner of art understands, that today, a phrase like “indigenous art” must be pronounced/ defined with all the diversity it entails. Therefore, any piece of art which engages with the subject needs to explore the rich and complex relations between the so-called “archaic” indigenous art forms, the contemporary representational forms and emphasise/recognise that such discourses demands a re-interrogation and problematisation of the very process and forms of its aesthetic construction. This lack of research/ investment into specificity is visible in every stage of the filmmaking process.

We know from the trailer that it is a story of a Mauji (Varun Dhawan), a tailor based in North India. There are 8 states in North India – including the Union Territories of Delhi and Chandigarh, with their own native textile history. We are told that the film’s principal photography began in the town of Chanderi, Madhya Pradesh in February 2018, and the actors were said to have bought traditional Chanderi sarees from local weavers in the town, as a token of appreciation. In the film, however, there is not a single reference to the Chanderi style of textile, let alone Madhya Pradesh. However, owing to the characters’ easy access to Delhi, Meerut and Agra, it is safe to assume that the story is based in Uttar Pradesh.

Mauji is said to have inherited the craft of tailoring with a sewing machine from his grandfather. But that is all we know about the skill. Since the film lacks this background information, the audience has to draw their insights from the material they are faced with. If Mauji is a young man based in UP, in Northern India, then I assume the craft he has inherited would be unique to UP. It soon becomes clear that Chikankari stitching is the skill he has inherited, as when his mother is admitted in the hospital, he and his wife, Mamta (Anushka Sharma), stitch a maxi for his mother out of disposable garments lying at home. To an audience familiar with basic fabrics, it is easily identifiable as having been made from the chikan fabric of Lucknow. Following a quintessential image of Yin and Yang, Mauji stitches the fabric, and Mamta imprints on the fabric with block prints, alluding to the more feminine art of embroidery. Is it too much to ask of a film aiming to promote self-sustenance, entrepreneurship and indigenous crafts to identify and name the craft? The answer is unfortunately in the affirmative for a commercial Hindi film. 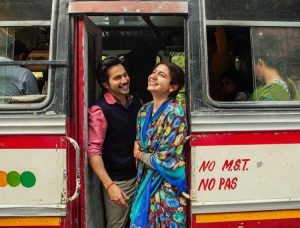 This absolute lack of research, detail, or even acknowledgement of the art form that you are supposedly drawing your inspiration from speaks volumes about the film team’s idea of representation. The film’s lucrative alignment with ‘Make In India’ (MII) (launched 2014), the Prime Minister’s glorious plan for inaugurating a type of Swadeshi movement to encourage companies to manufacture their products in India and increase their investment, comes as no surprise. But much like the collapse of the MII, which as per the current policy, permits 100% Foreign Direct Investment (FDI) in all 25 sectors of the MII program (except for space (74%), defence (49%) and news media (26%)) has a mighty fall.

A semblance of reality in the film comes through the character of Guddu (Namit Das), the brother of Maujji’s sister-in-law (Manukriti Pahwa) who sees in them an opportunity for profit-making. Guddu is the perfect middleman, the archetypal Delhi “jugaadu” figure who, like a parasite, thrives through a network of connections and relations, within and peripheral to the system, who become rich by feeding off of the labour of workers. He takes them to meet his boss, the owner of a garment label under the pretext of helping them with financial matters. However, their maxi design is stolen from them, and in exchange, they are lured with the petty promises of a stable job and fixed salary. In a striking scene, the handblocked-design imprinted by Maujji and Mamta is appropriated by the factory owner into a mechanised embroidery panel. The feeble couple accepts this offer with resignation due to their family’s urgent financial needs. However, the harsh truth dawns on them when Mauji discovers that the same maxi that they had been selling to poor patients in the government hospitals to ease their stay and treatment, was now being charged as a compulsive fee for four times the price. The film points to this power nexus between big commercial enterprises and public institutions as well as malpractices by middlemen and mediators for their imperialistic gains. It also reveals the transformative journey of a work of art to a commodity as it travels from the hands of the artist to the consumer in the market. Originally slated to release on Gandhi Jayanti this year, construction of Mauji’s native self, standing up to the Goliath-like Didi, the foreign-educated daughter of the factory’s owner is a useful/fit analogy to understand small-scale swadeshi self-reliance versus big imperialistic industrial ventures. It is this experience of injustice and humiliation that prompts Mauji to start his own practice, except that his practice ultimately turns into a private enterprise itself, and that is my problem with the film.

For a film that aims to raise questions about the contemporary relevance of indigenous art practices, instead of proposing new ways to battle with the economy, the film only rehashes the same regimes; in a manner that only changes the players, while the (rules of the) game remains the same.

In his quest for self-reliance and independence, he participates in the same fashion show that the company he was fired from was competing in. Thus, the film ends up becoming not the story of an individual’s fight against the system but his integration into the system.

To procure garments for display at the fashion show, he turns to his neighbours in the community, who we are told also hail from a community of tailors who were trained in tailoring practices but had to resort to odd jobs for livelihood. Remaining true to its nature of a commercial Hindi film, Sui Dhaaga, once again, tells me nothing about the social, historical or economic circumstances under which the community gave up on their traditional livelihood, or how they were adapting to modern circumstances, or what motivates their participation for the survival of their cultural practice. Suddenly, almost magically, things start falling into place, and Mauji’s collection is made ready by the neighbours very much like the creatures that helped Cinderella stitch a magical dress for the prince’s ball. Further, to make up for the lack of historical-material detail, the film recourses to constructing this grand narrative of the virtuous poor or primitive communal living. The film once again achieves its purpose of resurrecting a secular India, with the Muslim Nusrat, arranging a huge space for them to build their studio in, where neighbours come together to help, for the sake of goodwill and not in want of profits or motives. We see colourful images of hybrid textile practices from dyeing to hand blocks to all kinds of yarns being pulled out. I understand that this model of communal building is needed to pose resistance to the commercial forms of production and present an alternative ecosystem for local communities. However, the sheer absence of cinematic grammar that reflects on the evolution of these forms or their struggle with modernity point to deep-seated flaws in the documentation. Moreover, this coming together seems more like a one-time opportunity rather than a sustained conglomerate of communal cooperatives which ridicules the film’s claims about sustainability. We do not know if the neighbours are going to go back to their old life of odd jobs or if be a part of Mauji’s team of swadeshis. These are relevant questions that must be asked of a film which premises itself upon the story of a working-class professional’s social mobility.

The fashion show segment of the film briefly gives one a preview into the loopholes of big corporate and cultural institutions and the façade behind their CSR initiatives. However, by showcasing Mauji’s successful participation in the same capitalist fashion show to compete for the same awards, the film exposes its method and incorporation into mainstream markets. I understand that on the one hand, the film points out that there is no space for the indigenous arts to sustain unless it fits in, but rather than critiquing faults in the system, the film celebrates this. In the end, “Sab badhiya hai,” for individuals who successfully assimilate themselves. That the film ends on team ‘Made In India’s’ win at the fashion show confirms this. Such a narrative that focusses on a product rather than the process, pushes the film towards the same utilitarian approach which it sets out to resist.

Read more on ICF:
All for a Toilet: Propaganda or Social Reality?
In a League of its Own: Why Newton is the Perfect Political Entertainer