Rahman Abbas: “I condemn the statement of former President of Sahitya Academy Vishwanath Prasad Tiwari and it hurts me.” 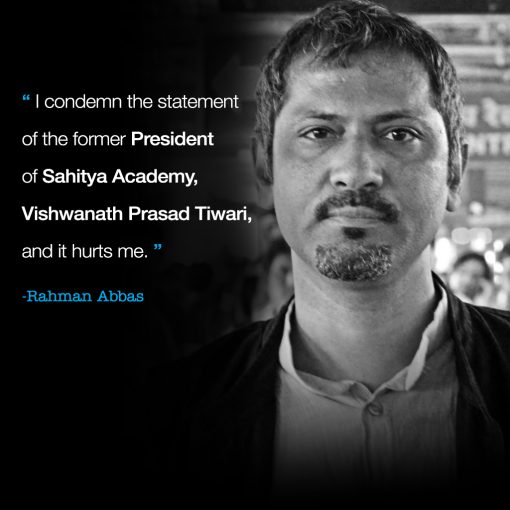 Rahman Abbas is a novelist who writes both in Urdu and English. He was targeted by Islamists following the publication of his first novel, Nakhalistan Ki Talash, which they termed obscene. His novels, Hide and Seek in the Shadow of God (2011) and Rohzin (2017), have been widely acclaimed.

Rahman Abbas responds to the recent comment by Vishwanath Prasad Tiwary that the return of awards in 2015 was a “political conspiracy”.

“I condemn the statement of former President of Sahitya Academy Vishwanath Prasad Tiwari and it hurts me. He must know that how right-wing fanatics have recently grown into a terrorist outfit, just yesterday an activist of a right-wing Hindutva organization has been arrested with crude bombs from Nalasopra, the western suburb of Mumbai after a raid at his residence by ATS. The sympathizers of the same alleged terrorist organisation have also been arrested from Pune and Palghar district of Maharashtra.  The same organisation has earlier been accused of hatching conspiracy and murdering rationalists from Dabholkar to Gauri Lankesh. This is unfortunate, that an eminent poet like Tiwari has tried to malign the humanitarian voices of the nation. What has happened post-2014 election and how the lynching of innocent people and surge of communal violence has become a new image of India in front of the world cannot be hidden from the eyes of Mr. Tiwari. If he cannot see how the nation has turned into a mobocracy where even judges, writers, journalists, and thinkers are unsafe and in such an volatile time he chooses to stand with a hate-mongering communal political ideology then it is his choice. Such choices are always made to gain small favors from the establishment and this is nothing new or surprising.”

Writers in Search of an Oasis: Rahman Abbas’ Novel Cleared of Obscenity Charges