Fact Check: The RSS had no role in India’s freedom struggle 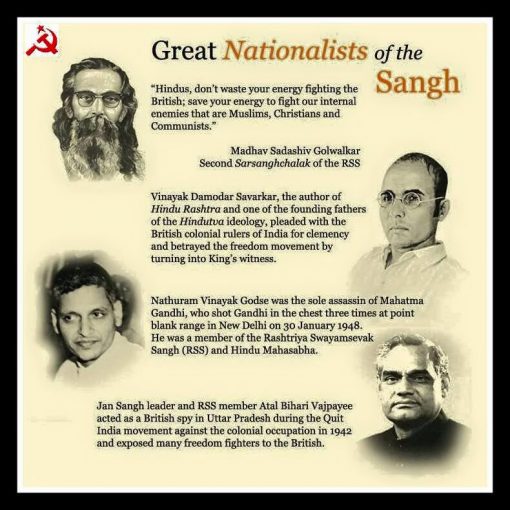 The role of the Rashtriya Swayamsevak Sangh (RSS), in the freedom movement against the British rule, was not an issue in the first five decades of independent India.

The project of constructing its role in the freedom movement started only after a seasoned RSS swayamsevak, Atal Bihari Vajpayee, took over as the Prime Minister of India in 1998.

Vajpayee was put under tremendous pressure by the RSS leadership to confer the Bharat Ratna, the highest civilian award in the country, on both K B Hedgewar and M S Golwalkar, for being great freedom fighters. In March 2003, a senior ideologue of the RSS, D B Thengadi, refused to accept the Padma Bhushan, conferred on him by the Government of India, unless the names of Hedgewar and Golwalkar were also added in the “honourable” list of great freedom fighters. In a letter to the President of India, he wrote that it would “be inappropriate on my part to accept the award, so long as revered Dr Hedgewar and revered Shri Guruji (Golwalkar) are not offered the Bharat Ratna.” Vajpayee was a shrewd politician. Despite being a seasoned RSS cadre, he did not act for obvious reasons.  These demands were made despite the fact that none of the RSS documents, either pre-independence or post-independence, indicate that RSS played any role in the anti-colonial.1

With Narendra Bhai Modi, who identifies himself as a “Hindu nationalist,” became the Prime Minister in 2014, this project got a great push, with there being talk  of conferring a Bharat Ratna to “Veer” V D Savarkar. This decision was shelved after a nation-wide debate over Savarkar’s  questionable role in the freedom struggle.

However, attempts to find RSS’s role in India’s glorious anti-colonial struggle continue unabated. The latest to undertake this task is RSS in-charge of the labour front, C K Saji Narayanan (“Don’t Foist Fear Onto Nationalism”) who is so bent on the issue that he has no qualms about resorting to lies to prove that RSS was in the thick of the freedom struggle.

Saji claims that founder of RSS, K B Hedgewar, was a staunch nationalist who was even imprisoned during the British rule, and “directed all RSS shakhas to celebr­ate the Congress’s 1929 resolution on ‘total independence’ by hoisting the national flag on January 26, 1930, and spreading the message of freedom.” He also claims,  “During the Quit India movement, RSS volunteers also gave their lives in the Chimur agitation in Vidarbha. While unfurling the freedom flag, an RSS volunteer was shot dead by the police…The fourth sarsanghchalak, Prof Rajendra Singh, too, is known for having taken part in Quit India. Till independence, every swayamsevak had to take a pledge with the words ’Desh ko swatantra kar’ (free the country)”. According to Saji, many socialist and Congress leaders who went underground took refuge in the houses of RSS leaders, “Aruna Asaf Ali and Jayaprakash Narayan were housed in Delhi sanghchalak Lala Hansraj Gupta’s residence; Achyut Patwardhan and Sane Guruji were sheltered at the residence of Pune sanghchalak Bhausaheb Deshmukh; and Krantiveer Nana Patil at Aundh sanghchalak, Pt S D Satwalekar’s house.”

Had it been the case, it would have been suicidal for the Congress leaders to take shelter there. Common sense tells that the RSS leaders’ houses were used as shelters only because the RSS leaders were not participating in the struggle and their houses were not under watch. The reality was that all the above-mentioned RSS leaders openly opposed the freedom struggle. In fact, they figured in the list of honourable friends of the British government.

We are told that Hedgewar joined the call of the 1929 Lahore Congress that called for a public unfurling of the Tricolour on every January 26. RSS, under the command of Hedgewar, refused to follow it. Instead on 21 January, 1930, he ordered  all the RSS shakhas to worship “Rashtriye dhwaj arthat bhagwa dhwaj, national flag i.e. saffron flag.” This order is available in a collection of Hedgewar’s letter published by RSS titled Dr. Hedgewar: Patrroop Veyaktidarshan, published in 1981.

In fact, RSS’ hatred for the tricolor, a symbol of the united freedom struggle of the Indian people was unambiguous.

On the eve Independence, when nation was getting ready to watch Jawaharlal Nehru unfurl the flag on the ramparts of the Lal Qila, the Red Fort, for the first time in history, the RSS English organ Organizer, in its issue of 14 August, 1947, denigrating the National Flag and wrote that it would “…never be respected and owned by Hindus. The word three is in itself an evil, and a flag having three colours will certainly produce a very bad psychological effect and is injurious to [the] country.”

Hedgewar was Jailed as Congressman, Not as an RSS Leader

We are told that Hedgewar as an RSS leader, went to jail in 1921 (RSS was founded in 1925) and 1931, during the Khilafat Movement and the Salt Satyagrah launched by Gandhi.

However, the fact of the matter is that both the times he went to jail as a Congressman, not for being an RSS leader, which is evident from the RSS archives.

According to the biography of Hedgewar penned by H V Seshadri, published by RSS in English in 1981, he was jailed for delivering an inflammatory speech in favour of the Khilafat Movement.  He was subsequently sentenced to one year’s rigorous imprisonment. There were two significant incidents regarding this jail term. First, Hedgewar hired a costly lawyer, touted as script disciplinarian, to defend him, thus openly violating the directive of Gandhi and the Congress that all those arrested would not offer defence. Secondly, despite one year’s imprisonment with hard labour in the Ajani Jail, on the day of his release on 12 July 1922, the same biography tells us, “When he removed the prison uniform and tried to wear his old cloths, his old shirt and coat felt too tight! He had gained 25 pounds (11+ kilograms) in weight, in spite of the rigours of the prison life.” It was the first and last time in the history of the jailed freedom fighters that a political prisoner gained weight, of more than 11 kilograms, while serving time in the British jail. The plausible explanation for how this came to be is provided in this biography itself. He was on friendly terms with the ferocious British jailor, Sir Jathar.

The second jail term was the outcome of a plot. The Hindi biography, authored by C P Bhishikar and published by the RSS, discloses that Hedgewar ordered that the “Sangh will not participate in the [Salt] Satyagrah.” However, he joined the Satyagrah with an ulterior motive. “With a freedom loving, self-sacrificing, and reputed group of people [of the Congress] inside with him there, he would discuss the Sangh with them and win them over for its work.” It is clear that Hedgewar chose to go to jail this time not because he had faith in the cause but in order to break the ranks of the Congress cadres. Bhishikar admitted that, after establishing RSS in 1925, Hedgewar “…in his speeches, used to talk only of Hindu organisation. Direct comment on the government used to be almost nil.”

The RSS’ Confession of Keeping Aloof From the Freedom Struggle

The Non-cooperation Movement and the Quit India Movement (QIM) are two great milestones in the history of the Indian Freedom Movement. What the nationalist Golwalkar thought about these movements is clear from the his comments, reproduced here from a collection of Golwalkar’s writings, Shri Guruji Samagr Darshan, vol. 4 published by RSS:

Definitely there are bound to be bad results of struggle. The boys became unruly after the 1920–21 movement… But these are inevitable products after the struggle… After 1942, people often started thinking that there was no need to think of the law.

Admitting that the RSS did not participate in the QIM, he said:

At that time, too, the routine work of the Sangh continued. Sangh vowed not to do anything directly. However, upheaval (uthal-puthal) in the minds of the Sangh volunteers continued. ‘The Sangh is an organisation of inactive persons, their talks are useless.’ Not only outsiders but many of our volunteers also talked like this. They were greatly disgusted too.

However, there is not a single publication or document of the Sangh which could throw some light on any significant contribution of the RSS towards the Quit India movement.

Why the RSS did not participate in the freedom struggle was a result of its understanding of India as an exclusive Hindu nation. According to Golwalkar, the RSS kept aloof from the freedom struggle because, “Territorial nationalism implies that the Indian nation is formed of all those people who reside in this land… An effort was consistently made to look upon Hindus, Muslims, Christians as ‘nationals’ and forge them into an integrated force against the foreign rule.”2

Denigration of Tradition of Martydom

The pre-Independence literature of the RSS has absolutely no mention of martyrs like Bhagat Singh, Chandershekhar Azad, Sukhdev, Rajguru, Ashfaqullah Khan, and the hundreds of other revolutionaries who laid down their lives for the freedom of India. How the RSS denigrated the tradition of martyrdom is evident from the following comment by the most important ideologue, who was also the second Sarsanghchalak, of the RSS:

There is no doubt that such man who embrace martyrdom are great heroes and their philosophy, too, is pre-eminently manly. They are far above the average men who meekly submit to fate and remain in fear and inaction. All the same, such persons are not held up as ideals in our society. We have not looked upon their martyrdom as the highest point of greatness to which men should aspire. For, after all, they failed in achieving their ideal, and failure implies some fatal flaw in them.3

In fact, the RSS followed its revered Hindutva icon, Savarkar, so far as opposing the freedom struggle was concerned. Savarkar’s collected works are available in Hindi, Samagr Savarkar Wangmaya (1963). They have been published by the Hindu Mahasabha (HMS).

The HMS, RSS’ fraternal organisation, led by the Hindutva icon, V D Savarkar, went to the extent of running coalition governments with the Muslim League in Bengal, Sind, and the North West Frontier Province (NWFP) in 1942, a period when the Congress had been banned and patriotic Indians were being shot dead for daring to carry the Tricolour.

The RSS never expressed opposition to these anti-national activities of the HMS.5

Those Hindutva intellectuals who are, now, busy constructing RSS’ role in the freedom struggle need to be honest about the pre-Independence RSS documents. Both Hedgewar (RSS chief, 1925–40) and Golwalkar (RSS chief, 1940–73) were opposed to the united freedom movement as its goal was an all-inclusive India. Golwalkar denounced the freedom struggle (Bunch of Thoughts, 1966, RSS publication) as “territorial nationalism” which “…had deprived us of the positive and inspiring content of our real Hindu Nationhood and made many of the ‘freedom movements’ virtually anti-British movements”. It was this ideological commitment to building Hindu rashtr in India that, apart from Hedgewar, who went to jail as Congressman, other RSS leaders like Golwalkar, Deendayal Upadhyaya (prominent RSS cadre since 1937) and LK Advani (RSS activist since 1942) never participated in the freedom struggle.

1.  For instance, the RSS archives until quite recently had only two small booklets on the theme, entitled RSS: A stooge Of British (Published by Jagarna Prakashana, Bangalore, 1972, Total pages 20) and Rashtriya Andolan and Sangh in Hindi (Published by Suruchi Prakashan, Delhi, 2000, total pages 18). Interestingly, in both the booklets more than two-thirds of the space was devoted to post-independence incidents. While referring to the British rule, there were only vague and unsubstantiated claims of participation in the freedom movement

Shamsul Islam taught Political Science at the University of Delhi from 1973 to 2013.