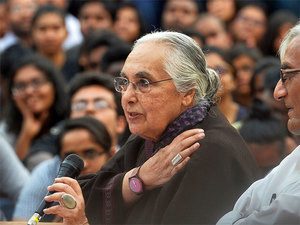 The first step towards the crystallisation of what we today call Hinduism was born in the consciousness of being the amorphous, subordinate, other. In a sense this was a reversal of roles. Earlier the term mleccha had been used by the upper caste Hindus to refer to the impure, amorphous rest. For the upper castes, Muslims and especially those not indigenous to India, were treated as mleccha since they did not observe the dharma and were debarred from entering the sanctum of the temple and the home. Indigenous converts to Islam also came under this category but their caste origins would have set them apart initially from the amorphous Muslim. Now the upper and lower castes were clubbed together under the label of ‘Hindu’, a new experience for the upper castes.

This in part accounts for the belief among many upper caste Hindus today that Hinduism in the last one thousand years has been through the most severe persecution that any religion in the world has ever undergone. The need to exaggerate the persecution at the hands of the Muslim is required to justify the inculcation of anti-Muslim sentiments among the Hindus of today. Such statements brush aside the fact that there were various expressions of religious persecution in India prior to the coming of the Muslims and particularly between the Śaiva and the Buddhist and Jaina sects and that at one level, the persistence of untouchability was also a form of religious intolerance. The authors of such statements conveniently forget that the last thousand years in the history of Hinduism have witnessed the establishment of the powerful Śankarācārya maṭhas, āśramas, and similar institutions attempting to provide an ecclesiastical structure to strengthen Brahmanism and conservatism; the powerful Daśanāmi and Bairāgi religious orders of Śaiva and Vaiṣṇava origin, vying for patronage and frequently in confrontation; the popular cults of the Nāthapanthis; the significant sects of the Bhakti traditions which are to be found in every corner of the subcontinent; and more recently a number of socio-religious reform movements which have been aimed at reforming and strengthening Hinduism. It was also the period which saw the expansion of the cults of Kṛṣṇa and Rāma with their own mythologies, literatures, rituals and circuits of pilgrimage. What defines many Hindus today has roots in the period of Muslim rule. Facets of belief and ritual regarded as essential to Hinduism belong to more recent times. The establishment of the sects which accompanied these developments often derived from wealthy patronage including that of both Hindu and Muslim rulers, which accounted for the prosperity of temples and institutions associated with these sects. The more innovative sects were in part the result of extensive dialogues between gurus, sādhus, pīrs and Sufis, a dialogue which was sometimes confrontational and sometimes conciliatory.  The last thousand years have seen the most assertive thrust of many Hindu sects. If by persecution is meant the conversion of Hindus to Islam and Christianity, then it should be kept in mind that the majority of conversions were from the lower castes and this is more a reflection on Hindu society than on persecution. Upper caste conversions were more frequently activated by factors such as political alliances and marriage circuits and here the conversion was hardly due to persecution. Tragically for those that converted on the assumption that there would be social equality in the new religion, this was never the case and the lower castes remained low in social ranking and carried their caste identities into the new religions.

When the destroying of temples and the breaking of images by Muslim iconoclasts is mentioned—and quite correctly so—it should however at the same time be stated that there were also many Muslim rulers, not excluding Aurangzeb, who gave substantial donations to Hindu sects and to individual brāhmaṇas. There was obviously more than just religious bigotry or religious tolerance involved in these actions. The relationship for example between the Mughal rulers and the Bundela rājās, which involved temple destruction among other things, and veered from close alliances to fierce hostility, was the product not merely of religious loyalties or differences, but the play of power and political negotiation. Nor should it be forgotten that the temple as a source of wealth was exploited even by Hindu rulers such as Harṣadeva of Kashmir who looted temples when he faced a fiscal crisis, or the Paramāra ruler who destroyed temples in the Caulukya kingdom, or the Rāṣṭrakūṭa king who tore up the temple courtyard of the Pratihāra ruler after a victorious campaign. Given the opulence of large temples, the wealth stored in them required protection, but the temple was also a statement of political authority when built by a ruler.

The European adoption of the term ‘Hindu’ gave it further currency as also the attempts of Catholic and Protestant Christian missionaries to convert the Gentoo/Hindu to Christianity. The pressure to convert, initially disassociated with European commercial activity, changed with the coming of British colonial power when, by the early nineteenth century, missionary activities were either surreptitiously or overtly, according to context, encouraged by the colonial authority. The impact both of missionary activity and Christian colonial power resulted in considerable soul searching on the part of those Indians who were close to this new historical experience. One result was the emergence of a number of groups such as the Brahmo Samaj, the Prathana Samaj, the Arya Samaj, the Ramakrishna Mission, the Theosophical Society, the Divine Life Society, the Swaminarayan movement, et al., which gave greater currency to the term Hinduism. There was much more dialogue of upper caste Hindus with Christians than there had been with Muslims, partly because for the coloniser power also lay in controlling knowledge about the colonised and partly because there were far fewer Hindus converting to Christianity than had converted to Islam. Some of the neo-Hindu sects as they have come to be called, were influenced by Christianity and some reacted against it; but even the latter were not immune from its imprint. This was inevitable given that it was the religion of the coloniser.

The challenge from Christian missionaries was not merely at the level of conversions and religious debates. The more subtle form was through educational institutions necessary to the emerging Indian middle class. Many who were attracted to these neo-Hindu groups had at some point of their lives experienced Christian education and were thereafter familiar with Christian ideas. The Christian missionary model played an important part, as for example in the institutions of the Arya Samaj. The Shaiva Siddhanta Samaj was inspired by Arumuga Navalar, who was roused to reinterpret Śaivism after translating the Bible into Tamil. The movement attracted middle-class Tamils seeking a cultural self-assertion. Added to this was the contribution of some Orientalist scholars who interpreted the religious texts to further their notions of how Hinduism should be constructed. The impact of Orientalism in creating the image of Indian, and particularly Hindu culture, as projected in the nineteenth century, was considerable.

Those among these groups influenced by Christianity, attempted to defend, redefine and create Hinduism on the model of Christianity. They sought for the equivalent of a monotheistic God, a Book, a Prophet or a Founder and congregational worship with an institutional organization supporting it. The implicit intention was again of defining ‘the Hindu’ as a reaction to being ‘the other’; the subconscious model was the Semitic religion. The monotheistic God was sought in the abstract notion of Brahman, the Absolute of the Upaniṣads with which the individual Ātman seeks unity in the process of mokṣa; or else with the interpretation of the term deva which was translated as God, suggesting a monotheistic God. The worship of a single deity among many others is not strictly speaking monotheism, although attempts have been made by modern commentators to argue this. Unlike many of the earlier sects which were associated with a particular deity, some of these groups claimed to transcend deity and reach out to the Absolute, Infinite, the Brahman. This was an attempt to transcend segmentary interests in an effort to attain a universalistic identity, but in social customs and ritual, caste identities and distinctions between high and low continued to be maintained.

Dissent and Protest in the Early Indian Tradition by Romila Thapar

Romila Thapar in Conversation with Rajan Gurukkal: The renowned historian discusses her methodology of research