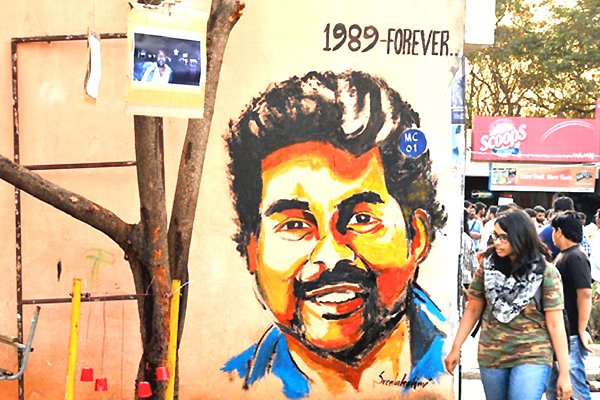 “And when religious instruction comes with a proxy, term “culture” resistance should be registered strongly”: Rohith Vemula

Two years after Rohith Vemula’s death, his memory lives within us in the form of songs, poetry, verse, and resistance. The systematic and the institutional murder of Vemula not only unearthed the reality in university spaces but also opened the doors to a space for cultural resistance. There was widespread outcry, and, since then, there has arisen a steady resistance across the country. Through their cultural resistance, these groups are successful in mobilising people in breaking the barriers of caste, gender, religion, region in our society. Today, many cultural groups have also become the victims of state repression in their fight towards eradicating caste and class structure from the society. The state fears them because they have a voice. They bring out the reality of India. This was one of the main reasons why, last year, the Ministry of Information and Broadcast denied permission to screen a the movie about Rohith, The Unbearable Being of Lightness. The reason the 27-year old Rohith was murdered was that he fought for equality, questioned the system; because he followed his dream.

The Indian Cultural Forum brings back some of the cultural performances that were organised across the country in his memory.

Justice for Rohith: Cultural Performance at University of Hyderabad

Even before the mourning of Rohith’s tragic death was over, the Vice Chancellor of University of Hyderabad, Appa Rao, declared curfew in the campus. Rather than punishing the real culprits behind the institutional murder of Rohith, the state government deployed police force inside the campus. Both the Centre and the State stood in support of Rohith’s killers. Everything, including food, water, and electricity, was cut off from the university. The students and teachers, who belonged to various linguistic groups, came together to fight against the authoritarianism of the administration through their cultural performances, which included songs of resistance, street plays, poetry, etc.

Rohith’s death at the hands of the University of Hyderabad’s administration spurred an anti caste movement in academia across the country. In fact, cultural assertion emerged as a popular medium through which people could be made aware on the “real” issues of the country. Kabir Kala Manch, a politico-cultural group that fights against the caste and class through their revolutionary songs, bring back Rohith through their songs.  Through their performance, Seethal Sathe, along with her group, takes a dig at the caste system that drove Rohith to take such an extreme step.

Listen to their performance here.

A Tribute to Rohith  Vemula by Oorali

None of us are born free in this world. We come with a tag of our caste, class, race etc. These tags have victimised many of us. Rohith was one among them. Emile Durkhiem, in his work Le Suicide, argues that suicide, which was largely believed to be a highly individual and personal phenomenon, can be explicable through social structures and its functions. The depth of words in Rohith’s last letter remind us of our social reality. It was the caste system, and the equality was denied him as a dalit, from the very beginning of his life, drove him to take his own life. Through a creative mix of visuals, theatre, and poetry, Oorali performs the last letter of Rohith Vemula in their original composition “A Tribute to Rohith Vemula”