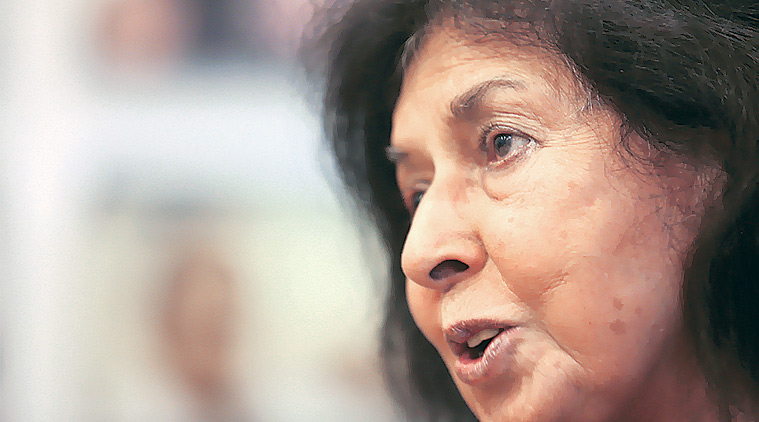 The twenty-fifth anniversary of the demolition of the Babri Masjid has reminded us once again that India is a bruised, battered and bleeding democracy. In the past three years, the country’s multi-cultural inheritance has been torn to shreds. Indians have been partitioned into Hindus and Others, and Hinduism has been replaced by a martial creed called Hindutva, invented by Savarkar and now put into practice by the RSS, whose government is waging war on Indians outside the Hindu fold and on those within it who oppose its ideology. The destruction of a sixteenth century mosque that was a famous landmark in Delhi gave notice that Hindu fundamentalism was on the warpath. By rewarding some of its ringleaders with high posts, the BJP gave its blessing to this act. An ideology that had been rejected by Indians since its inception in the 1920’s – when Indians chose to follow Mahatma Gandhi instead in the epic non-violent fight for freedom from British rule, and afterwards to stay staunchly secular — now governs us. We are told this is a new India and so it is.

It is now a country in which being different – in belief or lifestyle – is punishable, and one in which Muslim means enemy. The word is out that Muslim numbers must be reduced and the ominous impact of this statement is visible on the streets. We have seen defenceless Indians of the Muslim faith beaten, butchered and lynched in public view. But blood sport is not confined to Muslims. Well-known Hindu writers have been killed by gun-toting vigilantes and their murderers have been left free to kill again. We have heard important figures and supporters of the ruling party publicly sanction the murder or mutilation of anyone who disagrees with its mindset or criticizes its leader. The past three years have stamped this new outlook on a civilization that has since ancient times been defined by its historic openness to differences of religion and opinion.

Hatred of the other has now been carried to ridiculous extremes, cutting centuries of India’s medieval history out of textbooks in BJP-ruled states because Muslim rule is an intolerable insult to Hindutva pride. Jawaharlal Nehru’s name and contribution has similarly been obliterated from our modern history, in this case because the secular democratic foundation he and his distinguished colleagues laid for independent India has been a resounding success – acclaimed as a great achievement across the world – and remains the main obstacle to Hindutva’s project of establishing a Hindu rashtra. Mahatma Gandhi, disposed of by a Hindutva fanatic’s bullets in 1948, has now been resurrected on roadside hoardings and newspaper advertisements alongside Narendra Modi as though they subscribed to the same political, social and human values. The men who admire Nathuram Godse did not realize that killing Gandhi would not be the end of him and that the dead Gandhi would live on in the hearts and minds of the Indian people. They have therefore come to terms with the political necessity — indeed the vote-getting necessity — of keeping Gandhi in the public eye alongside themselves until they think they can do without him.

In the war on dissent, ferocious attacks continue to be launched on the creative imagination. The makers of films, books and works of art that displease the powers that be have met with a fury that is quite remarkable for its ignorance of the subjects it is attacking and the priceless value of art in all its forms to society. And now even the judiciary is no longer safe from assault. Recently Judge B.H. Loya, who was hearing a case in which a powerful ruling politician was one of the main accused, died a sudden inexplicable death.

Yet the many and manifold measures taken to frighten and silence Indians have not silenced them. “Protest” is too weak a word to describe the growing outrage that Indians feel, and are expressing all over the country individually and in the mass, through marches, rallies, petitions, and eloquent articles directed against state-sponsored terrorism, or the organized violence let loose on dissenting citizens to which the state turns a blind eye, or against unacceptable policies. The section of the press that has remained independent of pressures and coercion tells us the tide is turning. It is obvious that Indians, long accustomed to speaking their minds, refuse to be gagged. Nor will they allow the variety and richness of their many-splendoured civilization to be trashed, or their constitutional right to live, eat, worship, love and marry as they choose be snatched from them. The bugle against Hindutva, its crimes and its fantasies, has sounded loud and clear.

Ultimately a democracy makes its choice of government through elections. But in a damaged democracy the election process on which we have so far depended as the final deciding factor, also appears to have been damaged, as was clear when Opposition parties demanded a check on EVM’s, and paper trails to show results. The fact that EVM’s have been discarded by European democracies as being unreliable should give us good reason to re-consider their use. Meanwhile there is reason to worry about their misuse. After the U.P. election a worker from an all-Muslim locality in Uttar Pradesh reported to a businessman I know that not a single vote from that constituency had gone to the BJP, yet the results showed it had won all the votes. Two Independents told me that each of them had voted for himself, but both these showed up as BJP wins. These are facts based on knowledge, and may be tips of an iceberg in view of the doubts that have now risen among analysts about the “sweeping” nature of the civic election results in the U.P. Electoral fraud is well-known in instances here and elsewhere, but the kind and extent of the fraud, whether it operates through money, bribes, threats – or through electoral machines – depends on how much is at stake for the party concerned. The newly formed Nazi party in Germany gave fraud a colourful new twist when it called the burning in 1933 of the Reichstag – the Parliament building in Berlin — a Communist plot to occupy Germany, though the convicted arsonist was a Dutchman who had acted on his own. The lust for power dreams up its own solutions. In Germany the “communist plot” scare was an invention that was crucial to establishing the Nazi dictatorship. Here in India, winning Uttar Pradesh with its 84-plus seats in Parliament is crucial to any party seeking to amend the Constitution, as the BJP must now do to attain the numbers it will need in Parliament to declare India a Hindu rashtra under an amended Constitution, and/or to bring in a presidential in place of a parliamentary government. The stakes are high. The freeness and fairness of elections is at risk in this age of advanced technology, as the issue of alleged Russian interference in America’s presidential election raging abroad tells us. When nothing in this new India is as it once was, it remains for Indians committed to democracy to remain vigilant about its workings, including, and especially, in the electoral system upon which the political future depends.

Republished from The Tribune with the author's permission.
Nayantara Sahgal (born 10 May 1927) is an Indian writer who writes in English. Her fiction deals with India's elite responding to the crises engendered by political change; she was one of the first female Indian writers in English to receive wide recognition. She is a member of the Nehru–Gandhi family, the second of the three daughters born to Jawaharlal Nehru's sister, Vijaya Lakshmi Pandit.
Disclaimer: The views expressed in this article are the writer's own, and do not necessarily represent the views of the Indian Writers' Forum.