The Padmavati controversy: Behind the bastions of memory 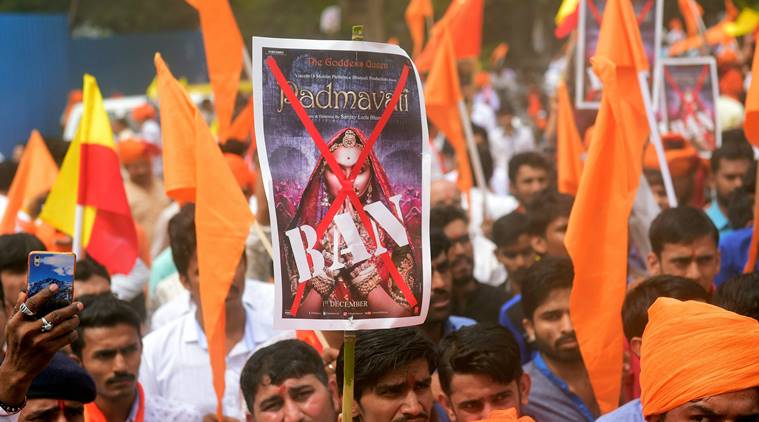 The past few months in India have been unexpectedly germane to the historian’s craft, promising an imminent adrenaline rush to the new apprentices, both in the guild and on its threshold. Sample these so-called “side-issues” which made headlines — cleansing of the Maharashtra government textbooks, denunciation of the Taj Mahal, indirect criticism of the Constitution by dubbing secularism as the “biggest lie” (and abdicating it in practice) by a public servant, and violent protests against Sanjay Leela Bhansali’s fantasy film, Padmavati. This midsummer madness is certainly not unique to Bharat Mata, it is characteristic of her clan, that of the modern nation-state, resting on the need to demarcate ones territory — both physical and mental — from the “other”. However, the more blood-curdling contestations happen within the barbed wire, when narratives of “shared history” and “collective past” are rendered redundant in what Renan called the “daily plebiscite” in his 1882 Sorbonne lecture (“Qu’est-ce qu’une nation?”). If something is central to this cultural politics of identity formation and articulation, then it is the slippery question of history and memory. Memory is anything but passive, and casts its spell silently, somewhat like Shakespeare’s Ariel in The Tempest! Its silence is uncanny.

“…the antonym of “remembrance” is not forgetting, it’s “dismemberment”. The Delhi sultans, Babur, Aurangzeb, Ghalib, Tagore, Gandhi, Nehru, Pash, et al have lost their membership to the Hindu Rashtra.”

The stalagmites and stalactites of ancestral memory, instincts and archetypes rest in the collective unconscious, uniting the entire species. On the other end, a very particularistic Maratha pride, premised on a set of linguistic and regional identities (overlapping) consolidated in the middle of the seventeenth century, seeks to celebrate its history by “forgetting” the history of the Mughals. To see pre-modern social formations in isolation is a dangerous thing — it leads to the estrangement of events from the larger processes they were a part of. It echoes the earlier writings of the Nationalist historians, undoubtedly extremely erudite and informed (and thus incomparable to the current madness), which sought to project the Vijayanagara empire as the last act of resistance against the expansionist moves of the Delhi and Bahamani sultanates. The fact that the Vijayanagara imperium was part of the “Islamicate” world, in which stuccos and foliate arches stood in harmony with gopurams and kalyana mandapas, became apparent with later scholarship. The earliest extant mosque in this “last bastion of Hindu rule” dates back to 1439 CE, is a post and lintel construction, and is mentioned as dharmasale (hall of religion) in an inscription. Janet Abu-Lughod proposed the fascinating idea of a pre-modern world system of trade and cultural exchange that existed prior to the West’s rise in the sixteenth century. Re-living the isolated histories of “untainted” and “pure” communities, untouched by the “other” would imply the death of reason. Since the assassination of reason has proved to be a protracted process, the neo-Nazis have decided to uproot it at the outset, and hence the tampering with textbooks. As Dr. Giti Chandra says, the antonym of “remembrance” is not forgetting, it’s “dismemberment”. The Delhi sultans, Babur, Aurangzeb, Ghalib, Tagore, Gandhi, Nehru, Pash, et al have lost their membership to the Hindu Rashtra. Penalised for invasion, being Muslim, sedition, salaciousness and socialism, they are crossing the shadow lines of virtual geographies, in a globalised world where the cloud space is larger than any continent.

“The Islam that dwells in the constructed collective memory marketed by Hindu fundamentalists is synonymous with temple desecration. The wilful failure to see temple desecration as a political act of de-legitimising a ruler, and temples as sites of power and economic prosperity, fuels the already hostile public imagination.”

The everyday acts of aggressive dismemberment culminated in the demolition of the Babri Masjid in Ayodhya, on 6 December, 1992. Under the able leadership of a communal clout, an iconophilic mob settled accounts with the alleged descendents of an iconoclastic people. The reel of memory played across the length and breadth of the subcontinent, spanning from the port town of Somnath to the urban centre of Kashi, adding more recent blood clots, borrowed from the Bamiyan Budhhas, to produce a full-length docudrama on the atrocities of Islam. The Islam that dwells in the constructed collective memory marketed by Hindu fundamentalists is synonymous with temple desecration. The wilful failure to see temple desecration as a political act of de-legitimising a ruler, and temples as sites of power and economic prosperity, fuels the already hostile public imagination. In a post-modern context, archaeologist Bjørnar Julius Olsen sees religious fundamentalism, neo-nationalism and the increasing ethnification of the political discourse as counter-reactions to cultural hybridity. Olsen argues that it is precisely this reaction that has led to the “proliferation of myths of origins and authenticity” and the increasing use of the past as a foundation for “histories of revenge”. Babur’s failure to qualify as an “authentic” Indian, owing to his Chagatai Turk ancestry, denigrates the cultural value of structures commissioned by his dispensation. His religion, Islam, is the cherry on the cake — the cake being Ayodhya. The Ayodhya narrative was perhaps the best product from the Hindutva bakery. If a temple existed prior to the construction of the mosque in 1528-9, is of utmost relevance to the disciplines of archaeology and history. However, the use of archaeology to justify the acts of vandalism and destruction of cultural property intensified the abuse of history in the country. According to Nayanjot Lahiri, the people who placed a Ram image in the Babri Masjid in December 1949 got their cue from a series of precedents of mosque desecration that took place during the Partition. For instance, a cemented effigy of Hanuman, the monkey god, was placed in the Chauburji mosque on the Delhi ridge. The past doesn’t merely legitimise acts of revenge; it also offers models of seeking revenge. Moreover, the articulation of victory or of having “undone” a historical injustice makes use of the same vocabulary. In case of temple desecration, it is the lithic iconography that is invoked. The once mutilated and defaced Hindu Gods reappear in the mosques of the invader-conquerors, to re-write the histories of conquest.

“Historians could have announced a bounty on the entire film industry for its ahistorical and absolutely bizarre productions on history, but they are tolerant individuals who hold dear the freedom of expression and artistic liberties.”

The recent Padmavati controversy is another instance of this shadow play between history and memory. The Rajput community, represented by self-anointed groups like the Karni Sena, confidently asserts community memory as history. Again, as in the Ayodhya issue, if Padmavati was a historical character or Jayasi’s metaphor for desire like in other premakhyans, is of great interest to the mankind, but it doesn’t qualify as a reason to stall the release of the film or place bounty on the director’s head. Historians could have announced a bounty on the entire film industry for its ahistorical and absolutely bizarre productions on history, but they are tolerant individuals who hold dear the freedom of expression and artistic liberties. The Rajput community’s hurt patriarchy has been historically internalised by “their” women, and hence the valorisation and glorification of jauhar. The loss of geographical territory couldn’t have been followed by the loss of the corporeal territory of the “tied”, which was the site of subservience, veiled by the trappings of matrimony. As Meenakshi Thapan notes, “the body, besides being the site of violence, exclusion, and abuse” has its “celebratory aspects”. The annihilation of this body, untouched by the evil Muslim other, became the basis of Rajput pride — aan baan shaan (which, sadly is a Persian phrase) — as a descendent of the Kachhwaha royals said in a recent press conference held in Jaipur. What surprises me is the chicken-hearted silence on the legacy of Meera Bai, who too belonged to this community. To use Lahiri’s phrase, it is perhaps the “selective amnesia” that haunts the nation more than its collective memory.

Somok Roy studies history at Ramjas College, University of Delhi.
Disclaimer: The views expressed in this article are the writer's own, and do not necessarily represent the views of the Indian Writers' Forum.