The cultural fraternity protests the unmaking of India 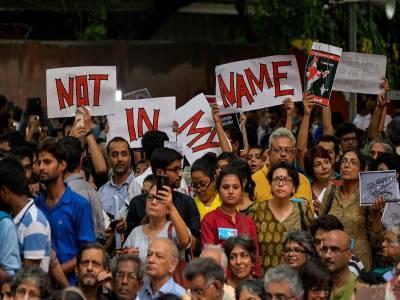 I live in a time that I could never have imagined. I live among people I could never have thought could be. I live in a space that leaves me wordless. Bestial? No, animals don’t behave like this. Barbaric? Even the Berbers had codes of conduct. How shall I describe the depravity of the spirit that leads us into becoming lynch mobs, condoned, in our indifference and silence, by all of us. What culture are we harping on preserving? What sanskriti? If this be our culture may it perish at once. If this be our sanskriti, may apocalypse come now.

It was ‘enough’ after the first death. What can we do but scream soundlessly at where we stand? And incite a trillion screams till we regain our senses.

“Words fail. Our protest must not!”

That sections within our society can be so insanely intolerant and so unabashedly cruel is alarming enough. Even more alarming is the impunity with which these murderous public outrages are perpetrated, an ominous confirmation that they are allowed, even encouraged, by people in authority. We do not even have the consolation that these sections constitute a lunatic fringe. They are getting centrestage. These murderous acts and the instincts leading to them will be suicidal. Words fail. Our protest must not!

“The train carried India from light to utter darkness.”

The ill-fated journey was on 22nd June 2017, just a few days before sacred Eid. Ill fate? Whose ill fate? Ill fate of a young boy of 16 and his family? Yes, of course, but more than that, it’s the grave ill fate of us, of all Indians. The train was travelling from one place to another. It was travelling from life to death, from peace to violence, from fellow feeling to intolerance, from love to hatred. The train carried India from light to utter darkness.

We all know what happened. The murderers needed just a fabricated excuse or nothing at all. The four brothers, including Junaid who died in the attack, were carrying new clothing for the family. Apparently, the killers ‘accused’ them of carrying beef and attacked them. We have been going through this dark phase for quite some time now, and we must see the end of it NOW.

Read Geetanjali Shree’s Writing in Troubled Times: Reflections of an Indian Writer and Mandakranta Sen’s Let the Poet Write of a Nation’s Protest.