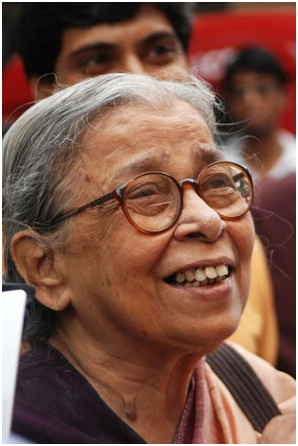 This is one obituary I wish I did not have to write.

She wanted to live “forever”. On many occasions, we spoke about death; and invariably, in every such conversation, she said firmly, “I want to live forever.” These words were an absolute, non-negotiable pronouncement. Yet this was not her craving for immortality.

She had her own assessment of her literary works; she never asked for praise from another. In fact, she detested it if anyone tried to praise her writing. If she had to listen to any praise, she would remain completely silent and stare at the speaker, with a smile and a “Not me” sort of self-effacing gesture. The desire to live was to fight injustice. There was no instance of injustice that did not leave her infuriated. Her activism did not spring from ideological positions. Though profoundly political, she did not swear by any known political philosophy or movement. Her activism sprang out of an instinct that is difficult to pin-point.

Born in 1926, 14th January of that year to be precise, she passed through the fervour of the freedom struggle. Schooled at Shantiniketan, she had seen Gurudev and been through the cultural strands in the environment there. Married to Bijon Bhattacharya — an avowed Communist — she knew the entire IPTA range and knew what Communism meant. In her more mature years, she was involved in various movements in Bihar, Jharkhand, Bengal, Rajasthan and Manipur. But it was difficult for any of these movements and trends of thought to keep her ideologically straight-jacketed. Mahasweta Devi chose when to act, and she acted out of her own analysis of the justice required in a given case. Her analysis was quite often driven by a deep compassion for the silenced, the marginalised.

In the midst of her turbulent times, claimed by struggle after struggle, she retained certain traits — to begin with, an unsettling sense of humor. It was not black humour. She would make a comment with the seeming gentleness of a Victorian lady, but completely floor the listener.

She had a temper impossible to match, and her impatience with snobbery quickly unmasked the most reputed people. It was impossible to predict when, in the middle of the most polite conversation with persons she had not previously met, she would curtly dismiss civility and tell the person he was a fraud. Station and degree of persons did not deter her.

She also had a great weakness for the old Khurshid songs. It was difficult to say when she would break out singing, maybe “Mere Baal-pan-kesaathi, bhulnaajaana…”But it was her innocence that stood out the most. She had the innocence of a teenage village girl, a naivete that was difficult to dignose. It brought tears to one’s eyes.

Nobody needs to be told anymore that she was oneof the most remarkable writers of the twentieth century. Her reputation had already spread in several countries outside India. With Gayari Chakraborty Spivak’s translation of her stories, it became more firmly established. Apart from Tagore, I am not aware oft any other Indianauthor whose complete works were picked up for translation in Italian, German, French and several other major languages. Major films were made on the basis of her stories by some of the greats in Indian cinema.

I knew her through her work before I met her personally. After getting to know her, I had numerous opportunities to listen to her lectures and conversations. There was something strange about her ability to use the spoken word. Often she addressed audiences outside Bengal in Hindi. If one went by the rules of grammer, most of her sentences could be faulted. Yet she managed to mesmerise audiences. She combined humility and an unbreakable determination, simplicity of words and complexity of ideas, leaving those who listened to her completely changed. I know so many people whose lives were shaped by just a few words coming from Mahasweta Devi. She had a presence like Mahatma Gandhi perhaps. It changed you altogether by a nameless force beyond words.

I met her when she was 72, already a legend in India and beyond, with a Magsaysay, a Jnanpith and a Padmashri. Yet, as we came closer, as she developed the practice of spending a week or ten days in Baroda, staying with my wife and me, we realized how difficult her life had been and still was. For instance, even at the age of 75, Mahasweta Devi did not have a house of her own. She continued to stay in a rented house near the Ballygunj station and had to climb the flight of winding stairs to her flat. Her marriage had not been easy, and later her relationship with her son, a remarkably gifted poet, had not exactly been what it should be. When she was with us, in the anonymity and privacy of her new found home inBaroda, she came across as a lonely and a hugely misunderstood woman, much sinned against. Yet, she did not succumb to self-pity, nostalgia or fantasy. She was a realist to the core, and a crusader first.

Her last visit to Baroda was when she was 85. She was still full of energy, a will that could inspire her literary and activist admirers. But soon after, her bones began to show signs of fatigue. Over the last yearor so, a degree of dementia affected her. Yet when I visited her in Kolkata during the last few years, she did respond to a line or two from old Hindi film songs.

Writers and artists live on beyond their time. Mahasweta’s work is so phenomenal that for centuries together it will continue to have an audience. But that wonderful sense of humour, that fondness for song, that touching innocence making a great literary phenomenon called Mahashweta Devi — all that is now gone. Her demise leaves India with a gap in a time when we have lost, in quick succession, important public intellectuals such as K.G. Subramanyan, Narayan Desai and U.R. Anathamurthy. The vacuum is too big for critical times such as ours.Mahasweta’s departure makes this fact even more glaring.

G.N. Devy collaborated with Mahasweta Devi in establishing the Denotified and Nomadic Tribes Rights Action Group in 1998. Together, they created the Adivasi Academy at Tejgadh.For this work, they toured together through various states of India for 12 years. Devy lives in Dharwad.