‘My head aches from carrying all the weight’

Trapped in a cycle of debt and indignity, Dalit women in Havelian village who clean cattle sheds and collect dung in Jat Sikh homes, lose a portion of their wages for advances taken

With both hands, Manjit Kaur scoops buffalo dung from the mud and brick floor of the cattle shed. Squatting on her haunches, the 48-year-old scrapes the still-squishy faeces off the floor, filling a baalta (tub) that she then hoists on her head. Carefully balancing the load on her head, she walks past the wooden gates of the homestead, to a heap of dung about 50 metres away. The pile stands as high as her chest, evidence of her months-long labour.

It is a scorching April afternoon. In 30 minutes, Manjit repeats this short trip eight times. Finally, she washes the tub with water, using her bare hands. Before she leaves for the day, she fills a small steel milk container with half a litre of milk from one of the buffaloes, for her baby grandson.

This is the sixth home she has worked at since 7 a.m., all owned by Jat Sikhs, dominant caste landlords in Havelian, her village in Punjab’s Tarn Taran district.

“Majboori hai,” she says. It is helplessness that prompts her to clean cattle sheds for a living. She doesn’t know exactly how much dung she carries on her head in a day, but says, “Badda sir dukhda hai, bhar chukdey chukdey [My head aches a lot from carrying all the weight on my head].”

On her walk home, golden yellow wheat fields stretch as far as the horizon. They will be harvested soon, right after Baisakhi, the festival in April that marks the beginning of the harvest season in Punjab. Havelian’s Jat Sikhs own most of the agricultural land in Gandiwind block, producing mainly rice and wheat.

For Manjit, however, lunch was a cold chapati and tea, followed by an hour’s rest. She is now thirsty. “They don’t offer water even in this heat,” Manjit says, about her upper caste employers.

Manjit belongs to the Dalit community of Mazhabi Sikhs. Nearly two decades ago, she and her family began practising Christianity. About one-third of the population of Havelian, according to a 2019 report in Hindustan Times, comprises Scheduled Caste and Backward Class communities who work as farm or daily wage labourers. The rest are Jat Sikh. About 150 acres of the Jat Sikhs’ farmlands are located beyond the concertina fencing from where the border with Pakistan is just 200 metres away, the report adds.

Dalit women in Havelian either collect dung and clean cattle sheds or do domestic work in Jat Sikh homes.

What do they get for the work?

“For every cow or buffalo, we get one mann [or maund; about 37 kilos] of wheat or rice, as per the crop season, after every six months,” says Manjit.

Manjit works in seven houses, which own 50 dangars [animals] in total. “One house has 15, another has seven. A third has five; the fourth house has six…” Manjit begins to count.

Everyone else pays the right share of wheat or rice, except the family that owns 15 animals, she says. “They only give 10 mann [370 kilos] for 15 animals,” she says. “I am thinking of quitting their work.”

From the household that owns seven buffaloes, Manjit had borrowed Rs. 4,000, to buy clothes for her newborn grandson and for household expenses. On completing six months’ of work there, in May, she was paid her due of wheat, minus her outstanding dues calculated using the per kilo price of wheat.

Her pay for seven animals is seven mann , about 260 kilos.

Until mid-April she had paid Rs. 700 in interest.

Manjit lives with her family of seven – a farm labourer husband in his 50s, a son aged 24 who is also a farm labourer, daughter-in-law, two grandchildren, and two unmarried daughters aged 22 and 17. Both daughters do domestic work in Jat Sikh homes, each earning Rs. 500 a month.

She has also taken a loan of Rs. 2,500 from another employer, at no interest. Small loans from upper caste houses are essential to manage household expenses, she says, including purchase of groceries, medical bills, family weddings or other occasions, and monthly installments to small savings groups that help women with cash for buying livestock or other expenses.

In ‘Dalit Woman Labourers in Rural Punjab: Insight Facts’, a study released in March 2020, Dr. Gian Singh, (former) professor of Economics at Punjabi University, Patiala, says a survey by his team found that 96.3 per cent of Dalit woman labourers’ households in rural Punjab were in debt, with an average debt of over Rs. 54,300. As much as 80.40 per cent of the total loan amount was from non-institutional sources.

Sukhbir Kaur, 49, another Dalit woman in Havelian, explains that employers of many years do not charge veyaj (interest); only the newer employers do.

A relative of Manjit’s family, Sukhbir lives next door in her two-room house, with her husband and two sons in their 20s, all working as farm labourers or daily wage labourers for Rs. 300 a day, when work is available. Sukhbir has been collecting dung and cleaning cattle sheds in the houses of Jat Sikhs for 15 years now.

She works in two such houses, with a total of 10 animals. At a third home, she does domestic work for Rs. 500 a month. While she leaves for work before 9 a.m., there is no fixed time to return. “Some days I may return by noon, sometimes by 3 p.m. It can get as late as 6 p.m.,” Sukhbir says. “On returning, I have to prepare food and complete the rest of the work. By the time I go to bed, it is 10 p.m.”

Like Manjit, Sukhbir is also reeling under debt from her employers. Almost five years ago, she took a loan of Rs. 40,000 from one household, for her daughter’s wedding. Despite deducting a portion of her dues from the six mann (about 220 kilos) of wheat or rice she is paid every six months, the loan is not repaid. 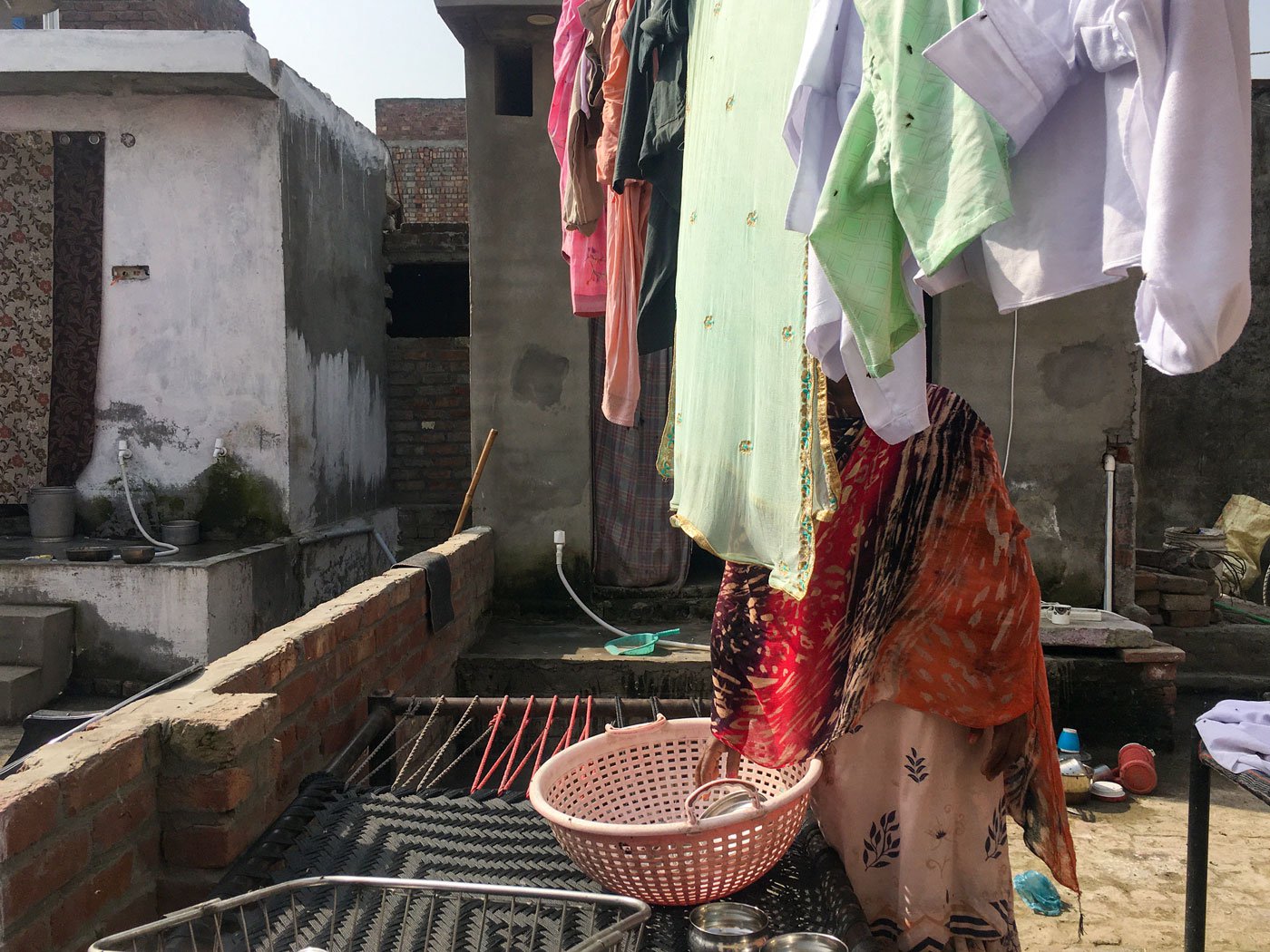 A calculation of the outstanding sum is done every six months, but she also borrows more money, for family functions or other exigencies. “Tey chalda hi rehnda hai [It goes on like this]. That is why we cannot get out of this debt cycle,” Sukhbir says.

Occasionally, the family that she borrowed from will order her to do some additional work. “As we have taken a loan from them, we cannot say no to anything,” says Sukhbir. “If we are unable to go to work one day, they will taunt us, tell us to repay their money and sit at home.”

Gagandeep, a lawyer-activist and president of the Dalit Dasta Virodhi Andolan, an organisation working to end slavery and caste discrimination in Punjab since 1985, says most Dalit women engaged in this work are poorly educated. “They are unable to keep note of the calculations done towards deducting the loan amount from the grain they are paid. So they remain trapped in debt.”

The exploitation of these women is common in the regions of Malwa (southern Punjab) and Majha (border areas of Punjab, where Tarn Taran is located), says Gagandeep, who goes by her first name only. “It is better in Doaba region [located between Beas and Sutlej rivers in Punjab] as many there are settled abroad.”

The study by the Punjabi University team also found that none of the Dalit women labourers surveyed knew anything about the Minimum Wages Act, 1948 .

Women who collect cattle dung are not given the status of labourers by including them in the schedule notified under the Minimum Wages Act, says Gagandeep. While domestic workers are included in the schedule by the government, those who clean cattle sheds located outside homes are not. “These women too need to be paid a minimum wage per hour, as they are cleaning and collecting dung in more than one house in a day,” says Gagandeep.

Sukhbir can never share any of this with her daughter’s parents-in-law. “They would hate us if they found out. They would think that they married their son into a poor family,” she says. Her son-in-law works as a mason, but his family is educated. Sukhbir has told them she sometimes works as a daily wage labourer.

Manjit herself had never worked before coming to Havelian as a new bride at the age of 17, where financial circumstances forced her to find employment. Her daughters work as domestic workers, but she is resolute that they will never collect cattle dung for a living.

Both Manjit and Sukhbir say their husbands spend their earnings on alcohol. “They take Rs. 200 out of their Rs. 300 daily wage to buy alcohol. So it gets difficult to survive [on the rest],” says Sukhbir. When there is no work, they take some of the women’s earnings too. “If we stop them, they beat us, push us and throw utensils at us,” Sukhbir says.

Sukhvinder Kaur, 35, a Dalit Mazhabi Sikh who lives in the same neighbourhood with a son and daughter, 15 and 12, and a father-in-law, in his 60s, says she wouldn’t have ever imagined doing the work of gathering dung when she was younger. After the birth of her son, however, her mother-in-law (who passed away five years ago) told her to start working to manage the family expenses on her own, even though her husband was working as a farm labourer.

Five years into her marriage, she started collecting dung and cleaning cattle sheds and cleaning and mopping floors in upper caste houses. Today, she works in five houses, in two as a domestic worker for Rs. 500 a month. The other three homes have 31 animals whose dung she collects.

Earlier, she hated it. “It was a burden on my head,” she says, about the 10-kilo dung tub she carries at a time. And the smell, she exclaims. “O dimag da kidda mar gaya [My brain no longer registers it].” she says.

In October 2021, her farm-labourer husband fell ill, eventually being diagnosed with a failed kidney. They took him to a private hospital but he died the following morning. “From the (medical) reports, we found that he had AIDS,” Sukhvinder says.

One loan she took before her husband’s death came with a monthly interest of Rs. 10 on every Rs. 100, an interest rate of 120 per year. The same family accused her of stealing jewellery from their home. “So I left their work and took another loan of Rs. 15,000 from others to repay their money with interest. They found the jewellery in their house in the end,” Sukhvinder says.

Ranjit Singh, district president of Dalit Dastan Virodhi Andolan, Tarn Taran, says the high rates of interest ensure that these women’s loans are never repaid in full. “The interest amount would be so high that a woman won’t be able to clear her debt. Eventually, she will be pushed towards bandua mazdoori [bonded labour],” he says. Sukhvinder, for example, paid Rs. 1,000 per month as interest on the loan of Rs. 10,000.

Forty-five years ago, India promulgated the Bonded Labour System (Abolition) Act, 1976 . Any violation under the Act is punishable with up to three years’ imprisonment and a Rs. 2,000 fine. It is also a punishable offence under the Scheduled Caste and Scheduled Tribe (Prevention of Atrocities) Act, 1989 if a person from a Scheduled Caste is compelled to work as a bonded labourer.

According to Ranjit, the district administration shows little interest in prosecuting these cases.

“It would have been easier to run the house if he [her husband] had been alive,” Sukhvinder says, commenting on her helplessness. “Our life is spent taking loans and repaying them.”

This article was originally published in People's Archive of Rural India on August 26, 2022.
Sanskriti Talwar is an independent journalist based in New Delhi. She reports on gender issues.