No Result
View All Result
in Resources

Three Years as a Union Territory: Human rights in J&K

Largely compiled from local first-hand accounts, government sources, media accounts, and NGO fact-finding reports, this is the fourth report issued by the Forum for Human Rights in Jammu and Kashmir.

The forum comprises an informal group of concerned citizens who believe that, in the prevailing situation in the former state of Jammu and Kashmir, an independent initiative is required so that continuing human rights violations do not go unnoticed.

The following is an excerpt from this year’s report. 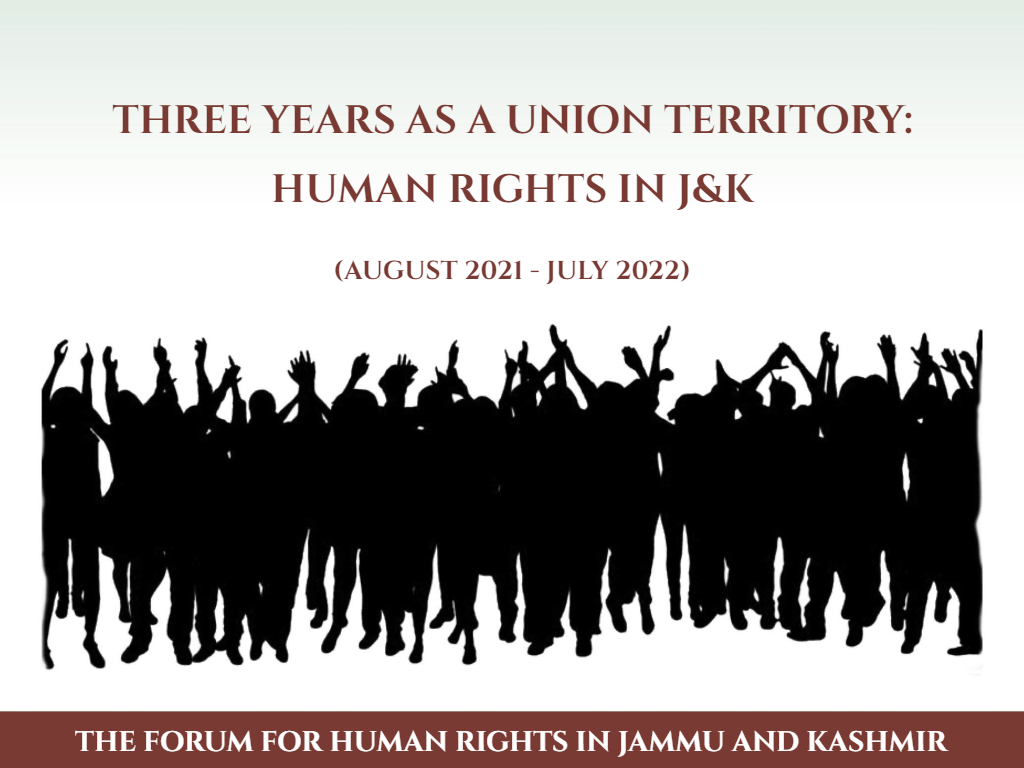 Scope and findings of the present report

For much of its recent history, the region has been subject to unilateral decision-making by New Delhi. The dilution of Article 370 took this trend to further extremes and drained local political leadership of its power in the region. The move further fortified the Centre’s ability to dictate events in the Union Territory. This continues to be the case at the time of publication, as Jammu and Kashmir remains under the administration of a lieutenant-governor.

The themes chosen for this edition of the report can be situated in the backdrop of the Centre’s unilateral attempts to engineer changes in Jammu and Kashmir. The first part of this report continues the Forum’s work of documenting human rights violations in the region. It highlights instances of violence against civilians at the hands of militants and security personnel and abuse of sedition and anti-terror laws against locals and journalists. The second section examines the political impact of the recent order of the Delimitation Commission which carried out a delimitation exercise for Parliamentary and Assembly seats in Jammu and Kashmir. This section is followed by an analysis of the recent attempt to manufacture grassroots democracy in the region through Panchayati Raj institutions. Finally, this report looks at the recent targeted killings of Kashmiri Pandits and the political decisions that may have precipitated the same.

The findings of the report are as follows:

1. Civilian casualties due to militancy in Jammu and Kashmir remain inordinately high. Since the publication of the Forum’s last report, militants have been targeting local elected representatives, migrant workers, and Hindus in the Valley. These attacks have been difficult to predict and have created an atmosphere of fear and unrest. Security arrangements for these vulnerable groups have proved to be inadequate so far.

2. Anti-terror and sedition laws continue to be disproportionately employed against locals, political leaders, and journalists. There has been a severe clampdown on the freedom of press through police harassment, intimidation, and arbitrary detention. Journalists and opposition leaders remain under detention for extensive time periods as the Union Territory administration opposes their bail on flimsy grounds.

3. The Delimitation Commission’s orders are not in consonance with accepted principles of allocation of seats. The criteria of population, which is the cardinal principle in this regard, has not been adhered to in the allocation of 47 assembly seats to Kashmir and 43 to Jammu. The present allocation dilutes the constitutional right of effective political representation and ‘one person one vote’ for voters in Kashmir.

4. The demarcation of Lok Sabha and Assembly seats in the Commission’s orders also generates concerns of gerrymandering. Multiple seats have been redrawn with different configurations of Hindu and Muslim majority areas to create undue electoral advantages for the ruling Bharatiya Janata Party (BJP) and to the drawback of opposition parties in the region.

5. Attempts to engender grassroots democracy in Jammu and Kashmir have not been fruitful. Elected Panchayat representatives remain fearful of attacks by militants. There is no comprehensive security mechanism in place for Panchayat leaders across the Union Territory. For Panchayat representatives who are on the militant hitlist, it has become impossible to discharge their duties as they have been confined in secure accommodations for extended periods of time, often in miserable conditions.

6. Panchayats have been unable to discharge development projects in their locality as leaders complain of interference in their work by an uncooperative bureaucracy. Local commissioners, administrators, and secretaries do not allow independent decision making by Panchayat representatives. The administration also makes their jobs more difficult by taking unilateral decisions and by arbitrarily withholding permissions for public works.

7. The recent attacks against Kashmiri Pandits in the Valley have come in an environment of heightened disaffection between communities. This tension has been in part caused by the polarisation and fear-mongering promoted by the film The Kashmir Files. Growing communalization elsewhere in the country also raises alarms of retaliation by militants and further jeopardizes the security of the already vulnerable community of Kashmiri Pandits living in the valley.

9. There has been no progress in the implementation of the PM’s employment package for Kashmiri Pandits in the Valley. Very few Kashmiri Pandit families have been granted accommodation as the proposed additional transit camps have yet to be constructed. The amount of financial relief granted to them has also not undergone any revision for a number of years and has caused great financial hardship to families.

Security and issues of law and order

1. Halt arrests of local journalists such as Fahad Shah on flimsy grounds and free those journalists who still remain in captivity, such as Aasif Sultan. As the Supreme Court recently noted in the case of Mohammad Zubair, journalists are facing a pattern where they get remanded in a new case just as they are about to get bail in another. This creates a vicious cycle of detention.

2. Similarly, either promptly charge and try political leaders who are still under detention or release them forthwith.

3. In light of targeting of local police by armed groups, minimize their involvement in counter-terrorism operations, which in any case ought to be undertaken only be specialist security forces. Retrain the bulk of the local police force for community policing.

1. Restore the statehood of Jammu and Kashmir and hold state Assembly elections in order to give effect to the third tier of governance.

2. Shelve the Delimitation Commission report given its severe flaws, and hold elections under the previously demarcated constituencies. This might require amending The Jammu and Kashmir Reorganisation Act, 2019, which is in any case under challenge before the Supreme Court. An amendment can easily be effected as the Parliament is currently in session.

1. Empower elected panchayat officials by giving them authority over halqa projects that cost less than Rs. 3 lakhs, in order to respond to the felt need of the concerned community. Facilitate a self-audit system for such projects. The execution of the projects should be done through the involvement of local labour, as visualized in the Panchayati Raj Act, and involving a contractor only when technical compulsions make this an imperative.

2. Institutionalize regular interaction between elected Panchayat representatives with the authorities and encourage them to learn from local governance experience through interaction with experts and counterparts from other states. While bureaucratic interface is required for Panchayati Raj, bureaucratic interference must be eschewed.

3. While providing individual security to the more than 30,000 elected panchayat officials may be impossible, since it would require over a lakh of security personnel, the current system of restricting them to hostel-like housing in Srinagar makes a mockery of their role. Recognise that the most effective security for Panchayat representatives comes from community support. Thus, refrain from actions or statements that might alienate the community and make Panchayat representatives vulnerable (for example – proclaiming that Panchayat representatives will replace existing political leaders and parties in the region is deeply resented in the Valley).

1. As the Government’s plan for the construction of 6000 additional transit accommodation units has only achieved a success rate of 17 percent, the project requires completion on a war footing. Moreover, there is an urgent need to build an additional few thousand housing units to enhance habitat security of Pandits.

2. The Government’s ongoing efforts to transfer Pandit employees under the PM’s package to relatively safer locations within the Valley must be stepped up but their demands for transfer to Jammu region would defeat the very purpose of Pandit relocation as part of their larger footprint in Kashmir.

3. Involve local community leaders in programs for reintegration of Kashmiri Pandits. Strengthen inter-community relations through communication and dialogue at village, block, and district level so as to reinvigorate trust and social bonds between the majority community and the Pandits.

Shared here with permission from the forum.
Disclaimer: The views expressed in this article are the writer's own, and do not necessarily represent the views of the Indian Writers' Forum.

TNUEF Conf: A Show of Brave Fight Against Caste Atrocities

Activist Research: How the All India Democratic Women’s Association Builds Knowledge to Change the World