“Avvai brings to the fore the life of Tamils when it was closest to nature, perhaps just when it was giving way to empires being formed. Inquilab emphasises the values Avvai stood for – chieftains who protected their fold; nature in its highest bloom; people sharing resources; and women making choices and speaking their minds,” says scholar and theatre person A Mangai about Avvai in Inquilab’s play.

As part of the Sahitya Akademi’s modern drama series, Mangai has translated the modern Tamil play, Avvai, written by Inquilab, a renowned poet, writer and activist.

Githa Hariharan speaks to Mangai about this translation and more. 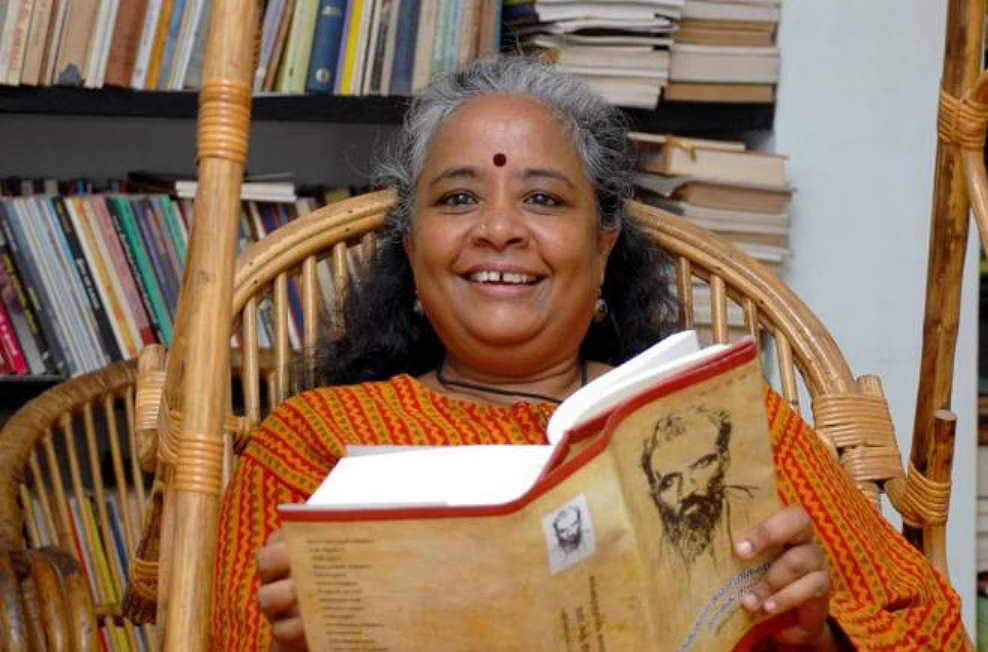 Githa Hariharan [GH]: This project is, as you say, on the “cusp of the classical and the contemporary”. This is true on several levels – for the Avvai figure, from Sangam times to the Marina beach; for the play by Inquilab; and for your translation that negotiates both classical Tamil and the living language. Would you comment on how these strands come together?

A Mangai [AM]: For Inquilab and myself, I think the flicker of this thought – of working with the Sangam classics – began from the contemporary. The demolition of the Babri Masjid, to be exact. The south of India, especially Tamil Nadu, did not experience the partition and its aftermath. Also, mosques and dargahs have always remained part of our culture, irrespective of the religion you practice. I still remember how my grandmother, clad in her nine-yard saree in the Brahminical style, would take us, her grandchildren, to Nagore dargah. We lived in Nagappattinam. Velankanni and Nagore were very much part of my psyche.

[Inquilab’s] skills in poetry helped him create that bridge between the classical past and contemporary usage.

I am not sure what triggered Inquilab. He was born in a lower caste Muslim family that practised medicine. His native place, Keezhakkarai, had the most glaring class differences among the majority of Muslims in the area. Early in his life, he was influenced by the Dravidian movement, by Periyar and by Marxism. He led a secular life until the end. His decision that his body be handed over to the hospital was only one of many such moves. And he was a Professor in Tamil, steeped in classical literature. So he was emboldened to use this great resource as a springboard. The passion with which he spoke of Avvai, traversing the land of the Tamil region with her bardic community, toddy-pot in hand, struck a chord in me. So apart from making the figure of Avvai contemporary to us, the thrust also was to find alternative resources to Hindu mythological sources like the Ramayana and the Mahabharata.

Within the Tamil milieu, the play Avvai broke the image commonly held of Avvai as the old, grey-haired, hunch-backed, pious, didactic and celibate woman. The Avvaiyar statue on the Marina beach is essentially constructed from the 1953 film Avvaiyar by Gemini Studio and Vasan. That film was produced primarily to counter Parasakthi, which stood for the Dravidian ideology. Questioning the acceptable image of Avvai within patriarchy created, in turn, an Avvai who challenges the norms. She is young, sensuous, intelligent, nomadic, outspoken and unattached, except on her own terms.

Also, the text bridged the classical usage of Tamil in a language prevalent in the 20th CE. Inquilab is essentially a poet. He walked into dramatic literature because of my prodding. His skills in poetry helped him create that bridge between the classical past and contemporary usage. I am not sure if the translation has fully captured that distinction.

GH: The use of the past for the present is a central preoccupation for creative work. Keeping the Avvai figure in mind, would you speak about the importance – and the challenges – of using the past in general, or figures from the past in particular, to make sense of the present?

AM: The use of the past for the present is like walking on thin ice. And there is also the prospect of a selective choice of the past, or a lack of criticality. India is paying a heavy price with the ghosts of the past vying with each other. I have also been sceptical of glorifying the most ancient as the most significant. That goes against the dialectics involved. But, despite all these apprehensions, we need to know our past; engage with it critically; learn and unlearn from it and build a meaningful, egalitarian, just society in the present. Basically, images from the past have been ‘hailed’ into serving the interests of those in power.

Tamil is also no exception. We can speak of the Tamil language as “forever young” – which is partially true, since “she” has survived till date and has not gone out of usage as other classical and semi-classical tongues like Sanskrit or Pali have. Within the Tamil language culture too, Kannagi hails supreme as the chaste wife of a merchant – husband who falls in love with a dancing girl, Madhavi. In most cases, the past has served to consolidate caste and religious differences, gender discrimination, and to validate untouchability, all in the name of gods and destiny! The alternative values within the culture are not highlighted. In fact, they are denied or covered up.

India is paying a heavy price with the ghosts of the past vying with each other.

Avvai brings to the fore the life of Tamils when it was closest to nature, perhaps just when it was giving way to empires being formed. Inquilab emphasises the values Avvai stood for – chieftains who protected their fold; nature in its highest bloom; people sharing resources; and women making choices and speaking their minds. Avvai also witnessed the new hierarchies in play. Her poetry stands testimony to these. And the play leads us to engage with the past critically.

GH: From the craft point of view, did you have to work hard to balance an awareness of time past and present, while also compressing or collapsing time? I ask this especially because the text is meant to be staged, not just read.

AM: Structurally, the play works on this challenge in a linear fashion. The exploration of Sangam Avvai’s texts are planked by two scenes – the first and the last. The former lets in the audience on relatively present times – school children learning by rote the texts ascribed to Avvaiyar, a 18th CE author who wrote didactic poetry to move into Sangam age. It is the popular grandma Avvaiyar who leads us to the Sangam Avvai. The latter is set as a scene where the two Avvai-s meet and discuss their respective trajectory and end up meeting a new Avvai, a poet from Sri Lanka. These two scenes seem to be the prefix and suffix to the depiction of Sangam Avvai.

I think Inquilab’s intention was to raise questions about the historiography of Tamil literature, and not stop with resurrecting the classical bard Avvai. Performatively, those two scenes helped me “make and unmake” the mimesis of the classical period. In fact, the contemporary ensemble of actors found that the ancient bardic community struck a chord with them – through all the clashes of ideas, the distribution of work, the practice of their art before they present it, meeting people of varied classes and being ‘roadies’ documenting lives in the making.

GH: That poems and songs live pretty much in the same place, is something the written and read text has made us forget. Is there an intimate relationship in theatre of the two? Does work like Inquilab’s, and does theatre practice that uses forms like teru koothu, remind us of this intimate relationship?

AM: Theatre in India is total theatre – opera, ballet and drama combined. Till mid-20th CE, we had plays written with songs – implying they should be sung and danced and dialogues in prose. Of course, those of us who grew up on the staple of Western education forget this. Even in English literature, we know that Shakespeare needed to be sung, narrated, spoken and enacted. In post-independent India, we have tried to provide an impetus to work with pre-colonial, ritualistic forms. “Back to the roots” has been on the agenda of Indian theatre practices during the independence struggle and after. This is especially true of Indian regional language theatres, where it flows organically. In Tamil, when we decided to go back to the idiom of Teru koothu, it added to the classical milieu we wanted to create – music, costumes, stylisation, balancing the classical and contemporary language. It heightened the energy and transported us to a new experience.

With the English text at hand, more experiments are in place. I am excited to see how Avvai will inhabit English and other Indian languages like Hindi, Malayalam, or Kannada. Some languages will find resonances of Avvai with other poets in their own languages (perhaps not as ancient as hers), enriching the complex multi-layered cultures of India.