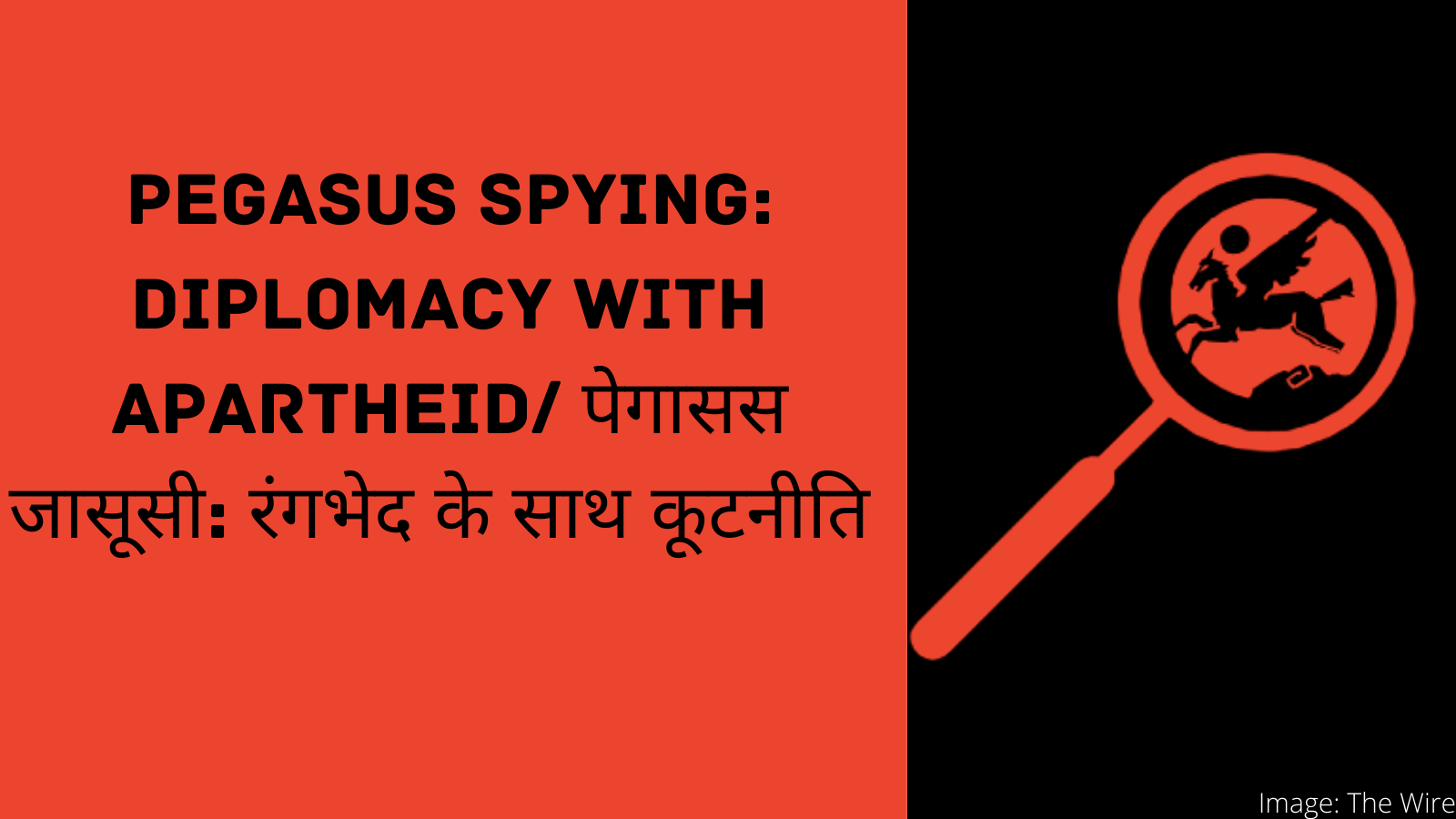 In July 2021, the Pegasus Project by Forbidden Stories Consortium and Amnesty Tech revealed the extent to which Israeli NSO Group’s Pegasus spyware had been deployed against opposition leaders, journalists, activists and more, across the world. More than 300 names from India were on the list of suspected targets and confirmed targets. The Modi government refused to come clean on the charges of targeted surveillance of citizens, even though NSO Group only sells its products to governments. The Supreme Court has formed a committee to investigate this matter, in absence of any specific denial by the government over the use of this spyware. A recent investigative report by The New York Times revealed that NSO Groups’ Pegasus was part of a $2 billion defence deal signed by the Prime Minister during his 2017 official visit to Israel. The report lays out how Israel has deployed Pegasus as a diplomatic tool to help whitewash its apartheid, occupation and settler colonial regime against Palestinian people.

Apartheid is a crime against humanity, liable to international sanctions. Palestinian activists and human rights organizations have been using the apartheid framework for Israel since decades, and now the rest of the world is catching up as ex-Presidents and MPs from the global south, Israeli as well as international human rights organizations like Human Rights Watch and Amnesty International have all arrived at the conclusion that Israel is an apartheid regime and that UN must investigate it for this crime against humanity.

Against the backdrop of this growing consensus, the Indian rightwing government continues to deepen its ties with the 21st century apartheid regime. This year marks 30 years of diplomatic ties between India and Israel. Once a frontrunner of global south solidarity to Palestinian liberation and South African anti-apartheid struggle, today India is the biggest buyer of Israeli arms and one of its closest allies. In the last seven years of BJP’s Hindutva regime, the ties with Israel have deepened on an ideological level. Hindutva and Zionism are both ideologies of violent supremacy. This similarity also reflects in policies of oppression. The deeply contested Citizenship Amendment Act resembles the Israeli Law of Return, while after the removal of Jammu and Kashmir’s special status, Indian diplomats have gone on record suggesting Israel-style settlements in the disputed region.

The deep alliance between two exclusivist regimes like India and Israel is unsurprising. Equally obvious is the solidarity among those oppressed by each government. Indians who oppose the Modi regime’s divisive policies also support Boycott, Divestment and Sanctions (BDS) campaigns against Israeli institutions as well as international corporations that profit from its occupation and apartheid. Palestinian farmers recently sent their solidarity to protesting Indian farmers that compelled the government to repeal its pro-corporate laws. This unity of struggles continues to flourish.

Israeli spyware technology is developed by being systematically used against Palestinians. Spyware trade is per se designed for repression, and Israel is at the centre of it because its colonial and apartheid regime deploys it against a subjugated people. The technology thus developed is sold to repressive governments globally. The Modi government’s polarising Hindutva agenda is threatened by people’s resistance – it is intolerant of dissent and is therefore resorting to targeted surveillance of conscientious citizens. In defence of our civil rights and in solidarity with the resisting Palestinian people, we demand that our public resources are not spent on surveillance technology bought from an apartheid regime.