More than 150 organisations and people of conscience from across the world have come together to launch a campaign targeting NSO Group’s Pegasus, serving Israel’s apartheid and exported to be used against dissenting voices globally. The campaign demands an end to all spyware trade. 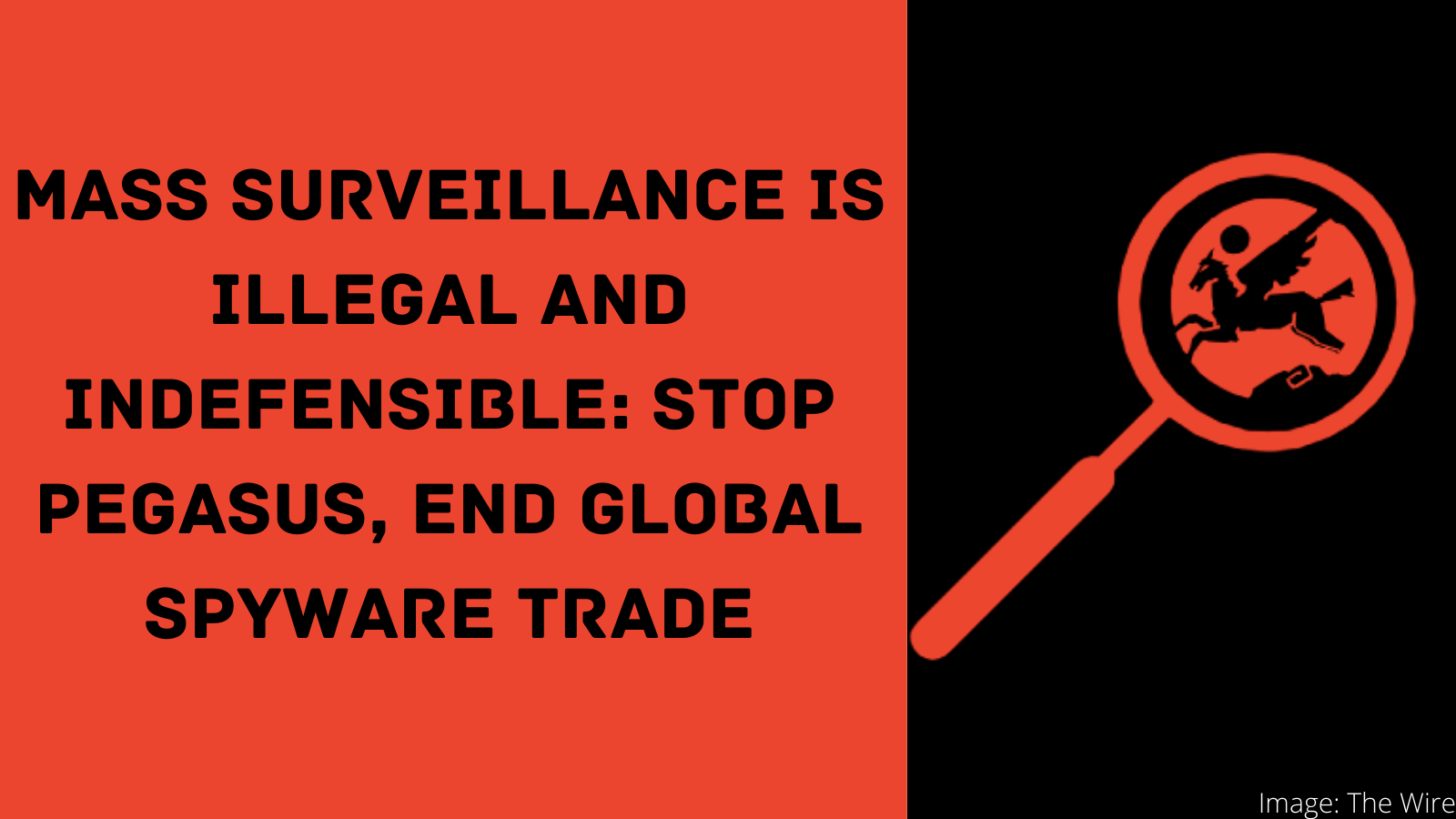 The Pegasus investigation has revealed the pervasive extent to which Israeli cyberweapons have been deployed against journalists, human rights defenders, opposition leaders and heads of states across the world. Quite unlike what the makers of such spywares have claimed, it is quite clear that Pegasus was used principally by authoritarian regimes or such figures within governments, and only for de-democratic ends: to weaken people’s voices and to suppress both truth and their tellers.

It is no surprise that the presence of Pegasus or its instrumental role can be found in the grossest of violations in today’s time: symbolized in the brazen murder of journalists Jamal Khashoggi and Cecilio Pineda Birto. Investigations  in 2016 and in 2021 reflect that half the countries in the world have deployed Pegasus against whoever they thought were threats to their authority. Between 2016 and now, despite multiple lawsuits and condemnations by global bodies, NSO Group has continued to thrive, receive endorsement by Israel, and is now part of the unicorn club of startups with a valuation of 1 billion dollars.

But NSO Group is just the tip of the iceberg. What was once the preserve of the most elite state intelligence units and security companies seeking to protect resources and people from getting hacked, the production and export of ‘intrusion softwares’ is now an unregulated global industry worth billions of dollars in world trade. The sums are reflective of the proliferation of such weapons that seek to hand over our most intimate thoughts and actions to regimes that are willing to pay to control them. And the proliferation shows: over the last few years such spywares have been instrumental in the breakup of protests, deportations, torture and killings in Honkong, Egypt, Myanmar, Nigeria Saudi Arabia, Singapore, Ethiopia Libya, Turkey, Hungary, and the United states to name a few. We cannot forget India here which has not just used Pegasus against the entire breath of the opposition to the current Hindu nationalist regime, but also used spyware to criminalize activists who have spent their lifetimes working with and for the people- among them 83- years old Jesuit priest, Fr Stan Swamy who died in judicial custody last month.

The shock of being deceived, all over the world, is yet to sink in: how could such anti-people spyware be developed, exported, and bought by governments with public money, and then weaponized against our best voices? As the stories of the weaponization of these intrusions still unfold, below are a few ideas we are quite sure of:

The only possible response to the unanimity with which governments across the world are legitimizing the use of such weapons, is an international solidarity of peoples and grassroots struggles, particularly those targeted by such spyware because of their defence of human rights and for speaking truth to power. What we want is a complete halt, a global moratorium on the production and trade of such weapons, echoing the call that UN experts, human rights bodies, media institutions, scholars, and civil society groups from across the world have made.

It is time that we are able to see through the facade of ‘security’ to clearly see these weapons for what they are: tools of repression, whose only purpose is to silence peoples voices. We Must put an end to such weapons!

In the past such efforts have ended police training exchange programs with Israel, pressured governments to end contracts with Israeli arms companies and brought together people’s tribunals on Israel’s aid to militarization in Latin America.  Only a global, intersectional struggle can put a halt to the proliferation of the indefensible spyware industry.

Our struggles are connected and we stand stronger together.

Read the statement in Spanish here.

INDIVIDUALS ON BEHALF OF ORGANISATIONS: