Stay on coercive action by AP police against 2 TV channels 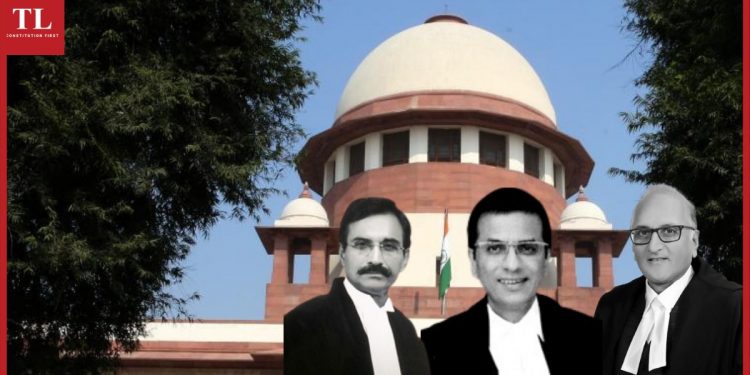 The Supreme Court Monday said it was time the court defined the limits of sedition law even as it stayed coercive action against two Telugu channels in FIRs registered against them by the Andhra Pradesh Government for running a story related to Covid19 management in the state.

The bench which also had Justice L Nageswara Rao and Justice Ravindra Bhat termed the FIR as “muzzling of the press” and issued notice to the state government.

“I agree with Mr. Divan’s argument that this is muzzling the press”, said Justice Rao. “It is time we define limits of sedition”, Justice Chandrachud added.

The bench was hearing a petition filed by TV5 news and ABN Andhra Jyoti seeking to quash the FIRs against them as well initiate contempt action for violating the Supreme Court’s order directing the police not to harass anybody for showing Covid19 related stories.

Senior Advocates Shyam Divan and Sidharth Luthra, appearing for TV5 News and ABN Andhra Jyoti respectively, contended that the FIRs were registered against them for running a statement by rebel YSR Congress MP Ramakrishna Raju, who has been critical of his party.

Raju is also facing sedition charges and was granted bail by the Supreme Court last week.

The Supreme Court last month also issued notice on a plea seeking to declare Section 124A of the IPC unconstitutional.

A bench of Justices UU Lalit, Indira Banerjee and KM Joseph had issued notice to the Central Government to respond by July 12 to the petition filed by journalists Kishorechandra Wangkhemcha from Manipur and Kanhaiya Lal Shukla from Chhattisgarh challenging the validity of the sedition law as violative of freedom of speech and expression (Article 19).

In the Kedar Nath Singh v. State of Bihar(1962), the top court had upheld the validity of the sedition law although it had narrowed down its scope and held “comments, however strongly worded, expressing disapprobation of actions of the Government, without exciting those feelings which generate the inclination to cause public disorder by acts of violence” was not sedition.

In 2016, the Supreme court reminded the authorities to be guided by the principles laid down in the Kedarnath case while dealing with sedition cases. Despite that, governments have been using the law to curb dissent.

First published in The Leaflet