Listen to My Case!

A collection of essays by former Judge at the Madras High Court, this book is a phenomenal testament to the individual and collective grit and resolve against the patriarchal-brahminical social orders. We meet women in this book who fight legal battles for themselves and the future. The legal battles recounted here reinforce the possibility of justice earned by those who rise from the margins and challenge the status quo.

The women we meet in this collection are brave, as writer Githa Hariharan notes in her introduction, “because the process of going to court is hard; even harder when the woman is without financial or emotional support from family, custom, or the present reading of the law.” Bravely, these women bring their grievances to the courts for remedy in a wide range of matters, from family or community disputes to sexual or marital violence, with a firm belief that justice and equality is their fundamental right, paving the way ahead.

Here is an extract from the book. A story from the Pothumbu village which came together to protest the sexual harassment of schoolgirls by the headmaster of the government high school, ensuring a thorough inquiry, as well as a High Court judgment that addressed caste, and also the treatment of survivors. 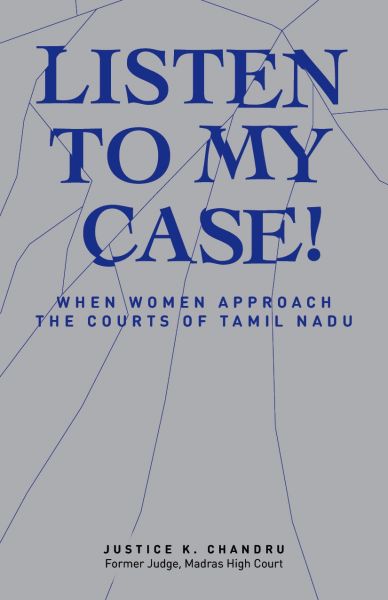 When the first prime minister of India, Pandit Jawaharlal Nehru, was asked which of his government’s achievements he considered  the foremost, he replied that it was women’s education. He was one  of the national leaders who believed that India would progress only if women were educated. We now see many women in educational  institutions, and in fact the women perform much better than  men.

Given these facts, it shocked everyone when, in 2011, the  villagers of Pothumbu near Madurai, Tamil Nadu, said that they  would not send their girl children to school anymore. The reason  was even more shocking. It was because of the bestial conduct of  the headmaster of the Pothumbu Government High School. Over  his three years at the school, he had sexually abused more than a  hundred girls in his care. When the little girls began to share their horror stories with parents, the entire village shuddered. They  staged a protest.

On receiving the information, Ms. Brinda Karat, the president  of All-India Democratic Women’s Association, conducted a direct  enquiry and found that the complaints were true. Ponnuthai, the  district secretary of AIDWA in the Madurai Rural District, and the  parents of the affected students lodged a complaint in the police  station, but to no effect. A relative of the headmaster was a teacher  at the same school. Other relatives were teachers in nearby schools.  They threatened the complainants and verbally abused the affected students. A fact-finding committee headed by U. Nirmala Rani,  a Madurai-based advocate, went to the village next. Some of the  students had completed their school education by then. Some had  even got married. And some were afraid that if they gave evidence,  they might face problems. The fact-finding committee tried its  best and conducted an inquiry among the students, parents and  teachers. It was this committee’s report that first brought to light  the full extent of the horrors committed by the headmaster. It listed  the sexual harassment and violence inflicted by him. He would ask  sick students to come to his room and, telling them he was going to  pray for their recovery, he would touch their breasts as if marking  them with the sign of the cross. He would call students in private  and hug them. Under the excuse of looking for something he  would insert his hand under their clothes. He also forced some of  the children to hold his penis. He would ask the younger girls to sit  on his lap, and do unspeakable things to them. Getting students to  sweep the floor, he took pictures of them bent over. It is sickening  to list these horrible acts.

Veerasamy, father of one of the affected girls, filed a case with  the Madurai bench of Madras High Court. He requested that a  special investigating team be constituted to investigate this history  of sexual abuse and award compensation to his daughter. AIDWA  impleaded itself in this petition. As a first step the court directed  the involvement of the Child Welfare Committee, under the  Protection of Child Rights Act, and directed this committee to file  a report. The Child Welfare Committee’s report corroborated the  charges filed by the fact-finding committee headed by U. Nirmala  Rani. The High court was not happy when it examined the records  submitted by the police department in respect of the inquiry  conducted by them.

It ordered the Madurai district police superintendent to  appear in person. Accordingly, Mr. Asra Garg, the superintendent of police, appeared in court. In the meantime, the education  department temporarily suspended the headmaster. The police  arrested him. Since nobody opposed the grant of bail strongly,  he was let out. A relative and a friend who had assisted him were  transferred to far-off schools.

The High Court found that a number of the abused children  belonged to the SC (Scheduled Castes) community. It ordered  that the matter be registered under the SC & ST (Prevention of  Atrocities) Act, 1989. Further, that a woman officer of the rank of  assistant superintendent should be appointed, that the government  appoint a woman special public prosecutor, and an inquiry be  conducted under the direct supervision of the district police  superintendent. The court stated:

In this case, admittedly, [a] number of school children [who]  belonged to SC community were sexually exploited by the  headmaster of the school. Admittedly, the complaints of the  children and their parents, if proved, would attract Section  3(1)(xi) and (xii) of the SC and ST (Prevention of Atrocities)  Act, 1989. Therefore, in such circumstances, the investigation  can be done by an officer not below the rank of Deputy  Superintendent of Police. . . . In this case, it should be done  by a woman police officer who is not below the rank of the  Deputy Superintendent of Police.

The High Court ordered that protection be given to the affected  girls and care taken that they should not feel threatened when  their statements were recorded. The court directed that the girls  be given counselling and, whether they were SC or non-SC, the  district collector should offer them a compensation of Rs. 1,20,000  each, without waiting for the end of the trial. As soon as the case is  registered, the special court should take into account the nature of the case and conclude it expeditiously. The recording of evidence  with the girls must be done with sensitivity, the accused teachers  must be transferred to far-off schools and on no account should  they return to the Pothumbu school.

The court recorded the widespread child sexual abuse and that  steps should be taken to remove it. It also stated that:

[T]he District Collector, Madurai is hereby directed to  identify the number of girls from out of the three reports,  i.e. fact finding team report headed by Ms. U. Nirmal [sic]  Rani, . . . report given by the Child Welfare Committee . . . and  statements given by the children and their parents to the then  Investigating Officer and prepare the [initial] report of those  names.

Even after the judgment the inquiry continued; the twenty four students who complained were given Rs. 28,80,000 as  compensation in the first stage. Yet, many students feared the  stigma that would be attached to them if they were identified, and  did not come forward to make a complaint. The court ordered:

The High Court directed that if students came forward to  complain even at a later date, they should be given compensation after verification. The government paid a total of Rs. 66 lakhs as  compensation. Since the judgment, the Pothumbu Government  High School has returned to normalcy. The girls now go there to  study. Nehru’s dream must come true.

Justice K Chandru is a former judge of the Madras High Court. In his tenure lasting close to six and a half years, he disposed of 90,000 cases recording one of the most prolific rates of disposal in the country. Some of his landmark judgements include ruling that women can become priests in temples; ruling in favour of a common burial ground irrespective of caste; scrapping police permission for staging plays, and ensuring community based reservation in noon meal centres.

The Impeccable Integrity of Ruby R.

A Map of Longings