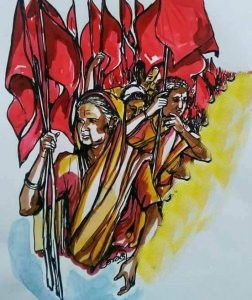 The AIDWA, AIKS and AIAWU note that the ongoing nationwide farmers’ protests have seen an unprecedented participation of women from all sections of society, and particularly women farmers and agricultural workers. There has been persistent agrarian distress over the last three decades. About 72 million women have lost their paid jobs in the agriculture and allied sectors in the last five years. More than 400,000 male farmers have committed suicide since the onset of the agrarian distress and their widows are yet to receive any debt waiver or rehabilitation package. The lack of recognition as farmers and workers has seriously jeopardised the access of women to social security and benefits. Most women are not eligible for even the meagre and inadequate income support that farmers get under the PM KISAN Sammaan Nidhi.

The Government’s limited response to the deepening problems of women farmers and agricultural workers has been inadequate measures have led to the contraction of the MGNREGS and its NRLM and MUDRA schemes have seen increased indebtedness amongst women and pushing them into debt-traps. The consistent demands for debt waivers and low interest credit through linkages with public banks have been ignored by the Government. Sale of common lands to corporate led projects has led to loss of livelihood for women who are dependent on fodder, forests and water resources for fulltime or supplementary livelihoods. Rising malnutrition among women and children is a result of the weakening of public procurement and PDS. The introduction of multi-brand retail and weakening of APMCs has an adverse impact on women retailers of vegetables, milk, fish etc.

Given this context, there is a special need to focus on challenges and facing women and some of these have been addressed in the Draft National Policy for Women in Agriculture which was prepared by the National Commission for Women in 2009. The Drafting Committee was headed by the current AIDWA President and the then NCW member, Prof Malini Bhattacharya and consisted of academics and activists who had been consistently raising issues pertaining to the rights of women in agriculture and its allied sectors. These rights pertained to the recognition of women as ‘farmer’ and ‘worker’; right to land and natural resources; right to food and food security; right to livelihood, decent work and freedom from debt; and right to regulated markets and fair prices. Once finalized, this policy was submitted to the Ministry of Agriculture for subsequent action, but unfortunately all subsequent governments have ignored these recommendations.

The AIDWA, AIKS and AIAWU strongly advocate that some of these challenges can be addressed through the adoption of the recommendations of the Draft National Policy for Women in Agriculture. The Draft gives policy directions to make specific budgetary allocations and multi-sectoral interventions for ensuring the well-being of women farmers and rural workers. Some of the proposed measures include:

These provisions can only be realised if the three anti-farm laws are repealed, a law to guarantee a remunerative MSP is enacted, and the government’s approach to women farmers and agricultural workers changes in a substantive way.