People’s Union for Civil Liberties is shocked at the illegal detention of the editor-in-chief of news portal, NewsClick, Prabir Purkayastha and well known author, Githa Hariharan, at their home in Delhi as the 113-hour “search” by the Enforcement Directorate continued. Senior citizens aged 73 and 67 years, they were kept in confinement and not allowed access to phones and even to their lawyers in gross violation of their fundamental rights. 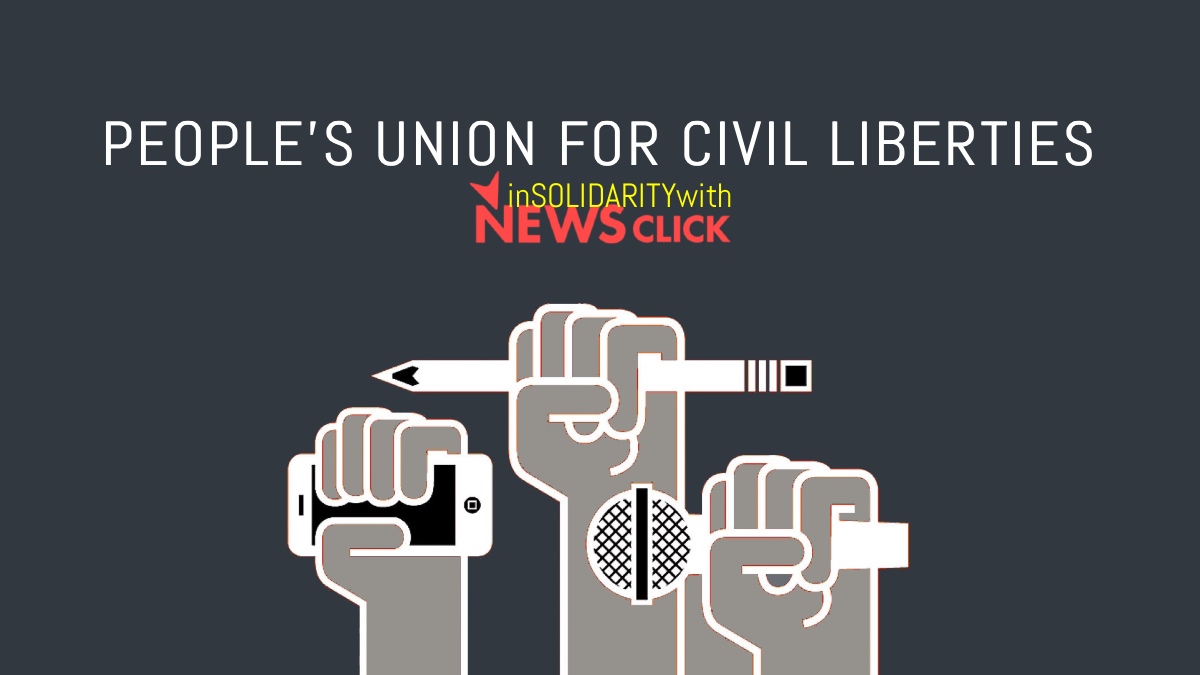 Unsurprisingly, even till the 5th day, their lawyers did not know why the raid was happening. “The raid is going on. We have not had a chance to understand from the clients what has happened. In fact, the clients are also not aware of the entire details, what is the allegation and we don’t know exactly why we are being investigated,” the lawyers said.

The raids occurred not just at the office of NewsClick and the house of its editor-in-chief, but also the residence of its chief editor, and in about ten places in Ghaziabad and Delhi. It appears that associated companies, shareholders and others were targeted, making it seem like a raid on a business cartel out to manipulate the market.

What came as a rude shock was that sections of the press carried selective leaks by ED. Newspapers and media outlets otherwise championing the cause of press freedom unfortunately allowed themselves to be used to smear the portal. Repeatedly, NewsClick issued statements saying it was cooperating with the investigation and had nothing to hide.

The manner of conducting the raid, the selective leaks meant to tarnish their image and highhandedness of the ED makes it obvious that the attempt was to disrupt the journalism that NewsClick is now renowned for: covering voices that do not feature in the mainstream media – whether it is tribal people displaced from the homes by so-called “development” projects or farmers out in protest in large numbers. It is evident that this was a ham-handed attempt to silence a media outlet that continued to feature stories that questioned the narrative the government wants to propagate, even as large sections of the media had surrendered.

NewsClick, since its formation in 2009, has gained a vast following, which this government fears, as it continues to inform the public about the truth and hold the government accountable. The immediate reason to come down heavily on them is perhaps their fearless reporting of the farmers’ movement, which is now attracting global attention as the “largest protest in the world”.

PUCL wishes to point out that Newsclick has repeatedly stated that they have nothing to hide and are cooperating with the ED. In view of this, the action of the ED is an attempt to gag the free press and intimidate and stifle independent media.

The attack on NewsClick is not an isolated incident of the present ruling government using the investigating agencies under its command against journalists and media organisations seen as exposing their fake claims and bringing the true facts to the attention of the larger citizenry.

The ED action against NewsClick has to be seen in the wake of the FIRs alleging sedition against six editors and journalists by the UP and MP Police, against India Today TV’s Rajdeep Sardesai, National Herald’s Zafar Agha and Mrinal Pande, and Caravan’s Paresh Nath, Ananth Nath and Vinod K Jose for their tweet on the death of a farmer during the Republic Day march by farmers into Delhi.

The Wire.in Editor Siddharth Varadarajan and journalist Ismat Ara have also been named in the FIR for a detailed report carried along with video evidence. Later The Guardian newspaper in the UK also raised some of the issues that these reports contained, offering reason to question the narrative that the government had put out.

So malicious are the FIRs that they charge journalists and editors of “inciting violence”; when all they have done is report facts about incidents.

On January 29, 2021, as independent journalist Mandeep Punia released videos identifying those responsible for violence during the farmer protests at Singhu Border, he was arrested. On February 1, more than 250 Twitter handles were blocked at the behest of the Ministry of Home Affairs for the use of a hashtag on farmers’ genocide. There could not be a more reprehensible illustration of media censorship than this.

Although Twitter lifted the blockage after a few hours, the GOI put pressure, and Twitter later blocked about 500 handles and issued a statement saying that it had not blocked journalists’ accounts and would work in accordance with Indian law.

Shockingly, according to news reports, by 12th February, Twitter succumbed to pressure of the Government of India, which used the specious arguments that all the tweets related to the hashtag “famer’s genocide”, that it was allowing irresponsible content which could provoke and inflame the situation and argued that it was “neither journalistic freedom nor freedom of expression”. The strong arm pressure of the government eventually culminated in the social media platform blocking 1,398 accounts of the 1,435 flagged accounts. How many of these are that of journalists and social media bloggers, we will know soon.

In January, we saw a criminal case of defamation made out in Gujarat against journalist Paranjoy Guha Thakurta for his investigative reports on the Adani industries, the subject of his investigation. UP Police file cases and arrest journalists who so much as dare to criticize the chief minister. Freelance journalist Prashant Kanojia was jailed for a month over a tweet. Since early October journalist Siddique Kappan of the Kerala Working Union of Journalists has been in Mathura jail under sections of the UAPA. He was arrested while travelling to Hathras from Delhi to cover the case of gang rape and murder of a Dalit girl. He has since been chargesheeted by the ED in a so-called money laundering case. There are also attempts being made to implicate him in the Delhi Riots of February 2020, with claims that he and the Popular Front of India raised funds for the protesters during the agitation against the Citizenship Amendment Act.

A study by widely respected senior journalist, Geeta Seshu, showed that more than 150 journalists have been arrested, detained and interrogated between 2010 and 2020. Of these cases, 40% were reported in 2020 alone.  The list of persecuted journalists from different parts of India is unfortunately, a long list.

The PUCL in its press statement in June 2020 had protested the increasing attacks on journalists. We would now categorically state that attacks on media freedom will drain the very essence of Indian democracy.

The PUCL calls on all organizations working towards democracy and peace, including media houses and individual journalists, to heed the words of Albert Camus: “The only way to deal with an unfree world is to become so absolutely free that your very existence is an act of rebellion”.

If we do not stand up and fight for those being jailed, silenced and tormented now, we will face even greater restrictions on freedom. We reiterate that we have the right to freedom of speech and to assemble peacefully, granted to us under Article 19 of the Constitution. We have a right to know, to be informed, and to express our opinions freely. We must fight now by continuing to exercise these rights, even though the government may unleash on us the police, ED, IT, CBI, NIA and invoke draconian laws like sedition and UAPA.

The PUCL also calls upon constitutionally sensitive and democratically minded citizens not to remain silent when the state so brazenly weaponises the law to persecute by false prosecution, not just the journalists, but also all others who may communicate their views critically questioning the government’s policies and activities. We wish to point out that the danger of allowing the government to brazenly violate with impunity and abuse the criminal laws will in the end undermine the citizen’s faith in the fairness and independence of the judicial process and administration of justice and the fundamental notions of liberty, justice, fraternity, transparency and accountability which form the basic structure of our constitutional democracy.

We call upon all right thinking citizens to stand in solidarity with the NewsClick team as they courageously carry out their journalistic duties of informing the citizens the truth about what is happening in India under the leadership of the present ruling party in the Centre and States, as also all other journalists and media organisations.

byThe Network of Women in Media

Citizens for Democracy: “ED raid on Newsclick vindictive and scandalous”