In conversation with the film collective

Like Kerala’s ‘Odessa’ group and the ‘Yukt Film Cooperative’ of the Film and Television Institute of India, ‘Ektara’ too is a bunch of Indian filmmakers who have come together to form a collective aimed at creating and producing resistance cinema. Ektara’s debut feature, Turup, uses a neighbourhood chess tournament in Bhopal as a metaphor to expose contemporary India’s socio-political realities, especially the region’s growing right-wing fundamentalism. By now, it has travelled to many a film festival and recognised as a significant addition to India’s growing indie and resistance cinema scene.

Hotel Raahgir is Ektara’s latest, multi-lingual venture, which is all set to release this month. The trailer was released on the collective’s social media platforms in October, within days, it garnered immense attention for its striking dialogues and the multiple pressing issues it appears to touch upon. As mentioned in the conversation below, the film is the product a workshop the group recently held for young, aspiring actors and filmmakers, wherein these untrained participants brainstormed and pitched in ideas and stories that were close to their hearts. “Set in a railway station canteen, Hotel Raahgir works as a comment and a reflection of contemporary times”, says Ektara below in a conversation with Mukulika R. 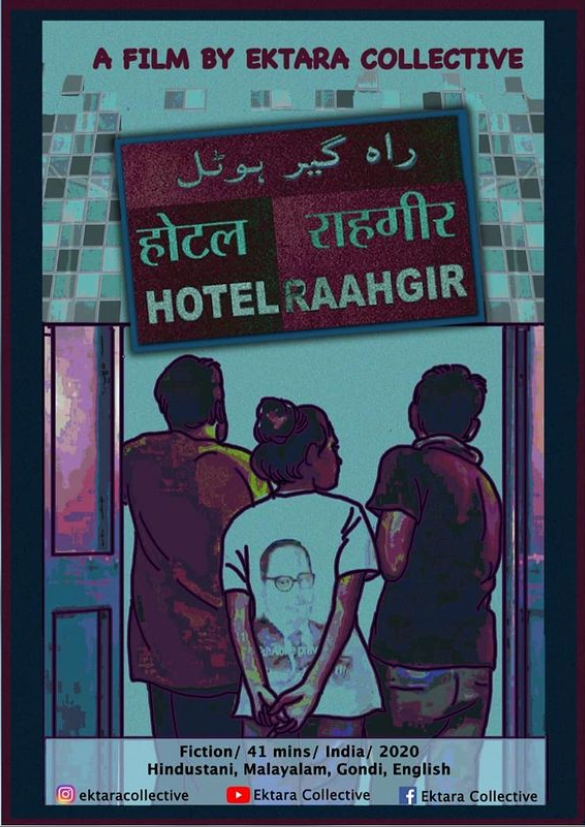 Mukulika R (MR): Congratulations on your exciting new film! Tell us all about Hotel Raahgir.

Ektara Collective (EC): Hotel Raahgir is our latest film, created through a collaborative process. We hope to be able to release it in the second half of December. Ektara had held workshops related to different aspects of filmmaking — scripting, acting, lighting, sound, production, art direction and editing. Practitioners of each field trained the participants. Various young people joined each of these workshops, which were the starting point from which the film evolved. Hotel Raahgir eventually turned out to be an amalgamation of various stories shared during the scripting workshop. The actors are young people who attended the acting workshop. Set in a railway station canteen, it works as a comment and a reflection of contemporary times.

MR: How was the experience of making it amid a pandemic?

EC: Hotel Raahgir was shot before the pandemic, but most of the post-production happened after the lockdown was declared. The pandemic did give us some logistical challenges. Specifically, we couldn’t sit together with the editor over a few days, discuss and do things right then and there. The cuts had to be shared online, as well as the comments. Limitations on bandwidth and the lack of a dedicated slot for everyone to work with the edit really challenged us. However, we managed to work our way around it, even though it caused some delays. We hope to be able to get back to a more “normal” schedule for our next film.

MR: As we understand, this is the collective’s forth film, after Chanda Ke Joote 1, Jaadui Machchi, and Turup. How has the journey been so far?

EC: In terms of stories, all four are very different films. But the commonality lies in our process of making them and in the team —  which has been growing in number, as well as in skills with each film. Apart from this, our understanding of collective working is also growing and evolving — so that there is more energy and less confusion and overlap with each film we make. Our understanding of the craft of film-making is also growing and so is our confidence.

MR: How did the collective get set up?

MR: There is great geographical difference between the members, as we understand. We’re very interested to know how you manage to function as a collective despite this.

EC: Many of the members of the collective are in and around Bhopal, Madhya Pradesh. Others are in different places around the country. For every film, we first ask the members to share stories that each one feels can be made into our next film. All of us try to read the stories and comment on it and the scripting begins — going through several versions. (For Hotel Raahgir, it was different, as mentioned before. The script evolved out of the shared efforts of people who participated in a script-writing workshop). Details like location are discussed and whoever is able to go and do a recce, does so. Once the production dates are decided, we all plan our travel. Till date, all our films have been located in Bhopal or around it. We have meetings before the actual shoot starts, where the schedule is fine-tuned and details shared. Once the shoot is over, most people return to their places. According to the needs, people meet or travel to wherever necessary for post production. Then we together decide the release date and venue. For the first public screening, we generally try to get the whole cast and crew together.

MR: We believe that the collective is making serious and fruitful interventions in the indie and resistance cinema scenes in India. What are your thoughts about the condition of these kinds of cinema in the country?

EC: We think independent film-making and many new initiatives are bringing new voices and perspectives to cinema. Cinema is also becoming richer from it. For a long time, cinema was controlled by certain classes and castes that shaped mainstream narrative and aesthetics. The content and perspective of different voices which have hitherto been kept away because of lack of resources will bring a change in the kind of stories that are told and the way they are told. As all of us are discovering and these films are finding their own audience too.

Ektara Collective is an independent, autonomous, non-funded group of people who seek to combine creative efforts and imagination and collaborate with trained and untrained people to make films. Ektara also makes music videos and dubs English films and those in other languages into Hindi.
Mukulika R is a member of the Editorial Collective at Indian Cultural Forum, New Delhi.