Speaking Up
Why is free speech different from hate speech?
August 31, 2020 Ujjaini Chatterji

Suresh Chavhanke, the Editor-in-Chief of Sudarshan News, a Hindi channel, recently claimed to have done an expose alleging that the Civil Services have been infiltrated by the Muslim community. What he terms as Bureaucracy Jihad, is a classic instance of hate speech. While students of Jamia  Millia Islamia approached the High Court alleging that the said program endangers their life and liberty and makes them targets of communal attacks, others approached the Supreme Court. This explainer deals with what hate speech is all about. 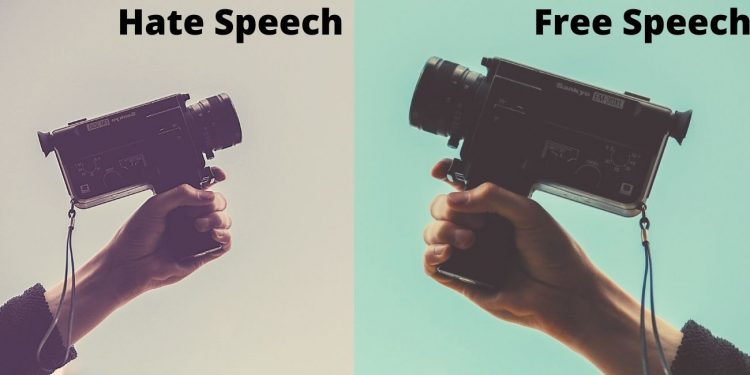 The Blacklaw’s Dictionary defines hate speech as, “Speech that carries no meaning other than the expression of hatred for some group, such as a particular race, especially in circumstances in which the communication is likely to provoke violence.”

What is Hate Speech? How is it Regulated in India?

The Constitution of India, under Article 19(1)(a) provides the right to freedom of speech and expression. However, under article 19(2), the constitution also provides for the reasonable restrictions against free speech in the interests of sovereignty and integrity of India, the security of the State, friendly relations with foreign States, public order, decency or morality or in relation to contempt of court, defamation or incitement to an offence.

Hate speech constitutes a criminal charge under Section 153A, which is the offence of promoting communal disharmony or feelings of hatred between different religious, racial, language or regional groups or castes or communities.

153B of the Indian Penal Code categorises the offence of promoting religious, racist, linguistic, community or caste hatred or incites any religious, caste or any other disharmony or enmity within India, through any speech either in written form or spoken. Section 298 of the IPC, similarly, classifies the offence of uttering words with the deliberate intent to wound the religious feelings of any person. Likewise, Section 505 of the IPC, criminalises the act of delivering speeches that incite violence. Sections 295A and 509A also have similar provisions. In 2014, while addressing a Public interest Litigation seeking guidelines for regulating Hate Speech, the Supreme Court made certain observations.

The 123(3A) of the Representation of the People Act, 1951, also criminalises hate speech by election candidates. In 2014, a Public Interest Litigation was filed before the Supreme Court of India [2014(11)SCC477], seeking guidelines on hate speech during elections. The Supreme Court observed that hate speech attempts to marginalise individuals on the basis of their membership in a group. This impacts such people socially by diminishing their social standing and acceptance within society. Hate speech, the Court observed, lays the groundwork for aggravated attacks on the vulnerable communities in the future. This weakens the ability of people to participate fully in a democracy. The Court also observed that existing laws in India were sufficient to tackle hate speeches. The root of the problem is not the absence of laws but rather a lack of their effective execution, the Court said.

Can these laws be misused?

These laws have often been misused to victimise artists, journalists, and activists by communal forces, on the pretext of causing communal disharmony. For instance, activists like Harsh Mander have been accused of delivering hate speech, despite the written text of his speech being available in which he advocates peace and love among religious communities. On the other hand, politicians of the ruling party who openly called for shooting peaceful anti-Citizen Amendment Act protesters have not been arrested or tried under the prevailing hate speech laws.

What is the International Law Regime Around Hate Speech?

There is no internationally agreed definition for hate speech. According to the United Nations, hate speech is defined as any kind of communication in speech, writing or behaviour, that attacks or uses pejorative or discriminatory language with reference to a person or a group on the basis of who they are, in other words, based on their religion, ethnicity, nationality, race, colour, descent, gender or other identity factors.

International human rights law has set standards by which states are supposed to adhere to strong directives against hate speech in their respective jurisdictions.

Even though the essential right to free speech is a fundamental right, it also has certain reasonable restrictions that go with it. As per Article 19(3) of the International Covenant on Civil and Political Rights (ICCPR), the right of freedom of speech can be regulated in order to honour the rights of others and in the interest of public order, public health or morals. Article 20(2) of the ICCPR also declares that any advocacy of national, racial, or religious hatred that constitutes incitement to discrimination, hostility or violence shall be prevented by law. Similarly, Article 10(2) of the European Convention on Human Rights, provides reasonable duties and restrictions during the exercise of one’s fundamental right to free speech.

The United Nations Strategy and Plan of Action on Hate Speech provides that member states must identify and support actors who challenge hate speech. They are also mandated to build capacity and develop policies to address hate speech. The Rabat Plan of Action, that was adopted by experts after a series of consultations that were convened by the United Nations Office of High Commissioner for Human Rights (OHCHR) derived authoritative conclusions and strong recommendations for the implementation of Article 20(2) of the ICCPR.

What are the Laws in Different Countries Regarding Hate Speech?

In Europe, the Constitutions of Austria, Germany, Hungary, Italy, alongside the provisions of the right to free speech, also prescribe reasonable restrictions for the same. These restrictions follow the standards provided under Article 19(3) of the ICCPR. These countries, further break down the constitutional provisions through other legal instruments regulating media laws, laws on equality and non-discrimination, laws to protect national, ethnic, linguistic or religious minorities etc. There are also specific laws to suit the regional requirements within countries like Germany and Italy.

In 2017, Germany passed a law by which social media was bound to pay a fine if they did not take down hateful content in time.

In 2018, Switzerland passed a law against hate speech and discrimination of the LGBTQ+ community.

In the United Kingdom, Article 10 of the Human Rights Act,1998, provides that everyone has the right to free speech. However, this free speech is regulated with the reasonable restrictions clause that includes formalities, conditions, restrictions or penalties as prescribed by law and is necessary for a democratic society, in the interests of national security, territorial integrity or public safety, for the prevention of disorder or crime, for the protection of health or morals, for the protection of the reputation or rights of others, for preventing the disclosure of information received in confidence, or for maintaining the authority and impartiality of the judiciary. Section 4 of Public Order Act, 1986 in the UK makes it an offence for any person to use threatening, abusive or insulting words or indulge in behaviour, or distribute or display to another person any writing, sign or other visible representation which is threatening, abusive or insulting. Interestingly, the United States of America does not have a law against hate speech which is protected under the First Amendment Act.

What Regulates Freedom of Speech in the Media?

Through the Press Council of India Act, 1978, the Press Council of India (PCI) was constituted. The PCI is the regulating body that ensures that the press functions in a tasteful manner, in accordance with journalistic standards. The PCI has a code of conduct for journalists that aims to foster the maintenance of high professional standards, public taste and respect for the rights and responsibilities of citizenship. On the basis of these codes of conduct, the PCI can also censor newspapers or news agencies. In fact, the PCI has the power of a civil court that can summon and examine people and evidence in the same nature of a judicial proceeding.

Television news, on the other hand, is regulated by the Cable Television Network (Regulation) Act, 1995. This act governs the code of conduct of the operation of cable television networks in India. This code also prohibits  the broadcast of news that violates decency or attacks community or religious sentiments. These guidelines are called the programme code.

Any violation of the program code is investigated and taken cognisance of by the Inter-Ministerial Committee.

Is the Ban on Hate Speech a “reasonable restriction” of the  Freedom of Speech and Expression?

Hate speech is considered a reasonable restriction on freedom of speech and expression. This issue was considered in the case of Canada v Taylor,[1990] 3 SCR 892 where the constitutional validity of hate speech laws was challenged on the ground that it violated the right to freedom of speech and expression. It was held that hate and propaganda contribute little to the aspirations of Canadians or Canada in the quest for truth, the promotion of individual self‑development, or the protection and fostering of a vibrant democracy where the participation of all individuals is accepted and encouraged. The Court also observed that it undermines the dignity and self‑worth of target group members and, more generally, contributes to disharmonious relations among various racial, cultural and religious groups, as a result eroding the tolerance and open‑mindedness that must flourish in a multicultural society which is committed to the idea of equality. The Supreme Court of Canada opined that hate speech laws are indeed a part of the global commitment to eradicate racism and communal disharmony.

The Indian Supreme Court had also referred to this judgement in 2014. The Court had also observed the holding of another observation by the Supreme Court by which they said that the effect of the words must be judged from the standards of reasonable, strong-minded, firm and courageous men, and not those of weak and vacillating minds, nor of those who scent danger in every hostile point of view. In the case of Rangarajan etc., v P. Jagjivan Ram 1989(2)SCC 574, it was held by the Supreme Court that in order to restrict free speech, a proximate and direct nexus must be found with any imminent danger to the community. This nexus cannot be far fetched, remote, or conjectural.  The Court held that our commitment to freedom of expression demands that it cannot be suppressed unless the situations created by allowing freedom are pressing and the community interest is endangered.  The anticipated danger should not be remote, conjectural, or far-fetched. It should have a proximate and direct nexus with the expression. The expression of thought should be intrinsically dangerous to public interests.

First published in The Leaflet
Ujjaini Chatterji is an Advocate based in Delhi and a regular contributor with The Leaflet.