This novel by M T Vasudevan, and translated by N Gopalakrishnan, is an engaging journey through the protagonist’s reminiscences and the city that connotes death, dharma, and moksha. Narrated in a non-linear manner with multiple narrative voices, this is a story replete with allusions, myths, legends and imagination. 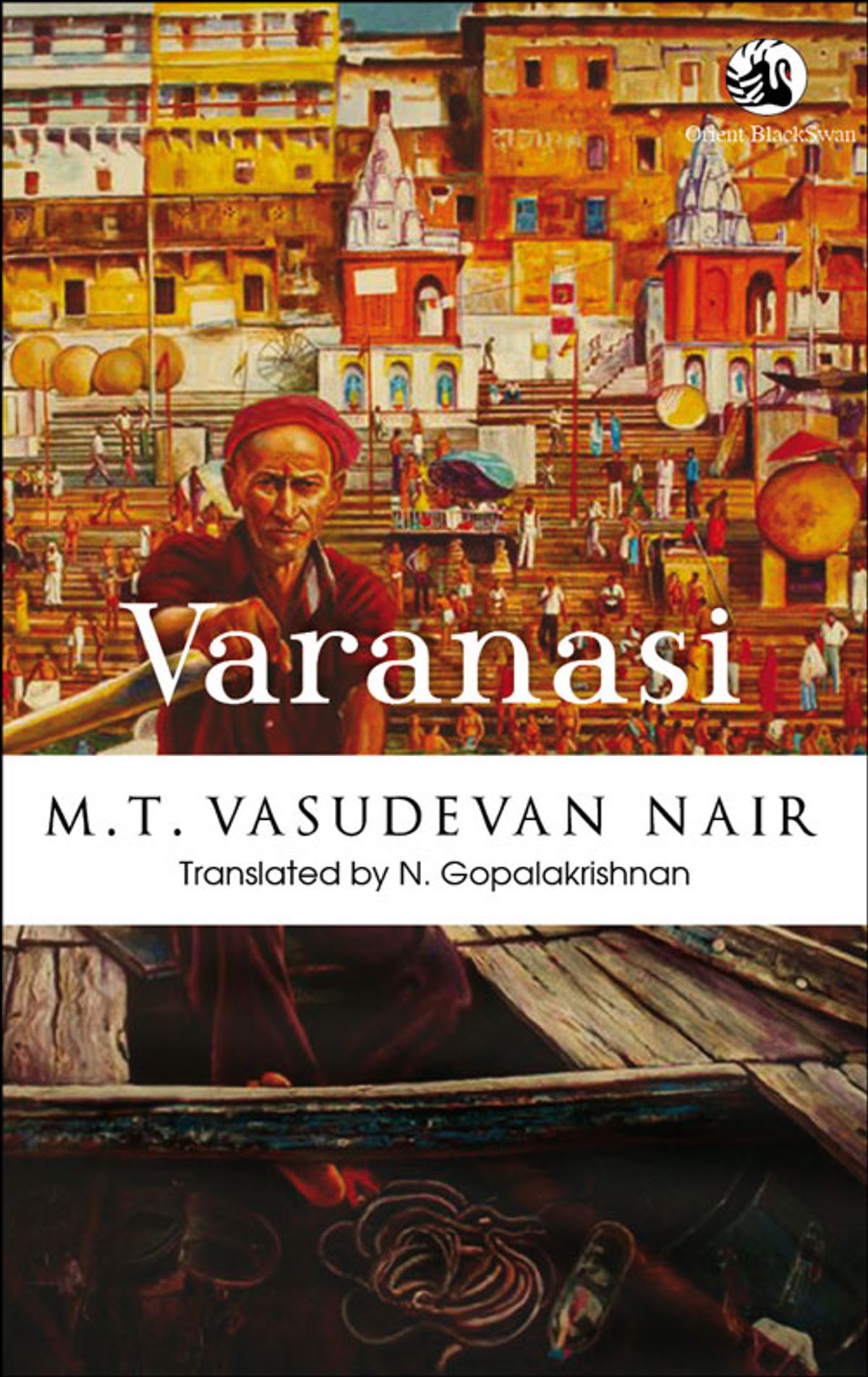 At night, in the room he looked at the old papers. Tempest: A Criticism of Colonisation.

He read the first page.

Before analysing one of Shakespeare’s plays that have a good ending from a new point of view, it would be appropriate to make a quick journey through his Tragedies. Among the tragic heroes of Shakespeare, Hamlet, Lear, Othello and Macbeth are the ones who have been the subjects of the most extensive studies. They were heroic soldiers and men of high status who possessed many good qualities. But tackling lives that were full of complication, they suffered loss of poise and this loss of poise cost them dear.

There was a small envelope, its flap stapled. Sudhakaran opened it.

It is right that you should quote Professor Sainsbury, Dawson, Bradbury and others. However, I find at least two quotations on each page. When you traverse through the darkness of scholarly studies, you should keep in view your own conclusions like the light at the end of the tunnel.

There is an old poem from the Punch magazine that I had noted down.

The poet writes further in the poem, how Shakespeare, in the English paper for that year, which had several questions on King Lear, had fared very badly, since he had not read his Bradley.

No British critic has treated Caliban as a principal character. But an Indian can see him as such. Now when I read the words of the slave I see quite a few possibilities.

The priests were just taking up their positions. Sudhakaran reached even before five in the morning. The lamps in the boats with the boatmen asleep were on.

The fragments of clouds in the east slowly turned copper. They were slowly making way for the light of the sun.

It was after years that he was viewing sunrise on the Ganga. He whispered some lines of poetry that seemed to rise like bubbles in his mind.

The greatness of Truth.
The lonely traveller.
The life spring of all existence.

The sun rose in the sky and became a full circle. The light was now golden.

Please reduce the glow of your light. Let me have a good look at your blessed face.

Tikoo, son of Om Prakash came. He introduced a middle-aged priest. He also settled the financial terms with him.

First the rites for the ancestors.

He made the offering of rice to each of the departed souls. He gathered the holy gingelly grass and dry rice, took them to the river and immersed them. He took three dips in the water.

When he got back he said to the priest.

‘He has been to a college. He can speak in English,’ Tikoo said.

‘Is there really something called the Other World? Is there rebirth? I really cannot imagine.’

There was a gentle smile on the face of the priest. ‘Well, they exist, if you believe that they exist.’

‘I also do not know whether the souls of people for whom posthumous rites have not been performed will wander about in the universe for eternity, finding no place here or in the hereafter,’ Sudhakaran said.

The priest looked at the horizon far away and folded his hands in reverence.

‘Everything depends on your faith. People have been coming here for five thousand years. They will continue to come. It is all a matter of faith.’

Sudhakaran’s doubt remained. But he felt consoled. Tikoo stood by with undivided attention.

‘There is no one to perform posthumous rites for me. I do not want that I should become a nuisance to anyone.’

The priest thought for a moment. ‘You can perform the rites for yourself in anticipation of death. It has been provided in the sastras.1 It is called “Atma Pindom”.’

There was a pause. Then he said, ‘Well, we have the sastras. You can do it if you like, for the sake of safety.’ He smiled, probably because he found himself speaking in English.

Turn into a dead man even while alive!

The priest spread the holy grass. He prepared oil, gingelly and rice.

‘Have your bath and come back. You should take three dips. You must meditate on Kashi Viswanath, Maha Vishnu and Annapoorna.’

When he rose after taking the dips, he wondered what he should pray for.

‘Forgive me for my sins? In that case, you deities too will have to seek pardon for your sins!’

He sat down in front of the priest. Silently, he repeated mentally the mantras chanted by the priest.

Invoke the departed soul. ‘Sudhakaran, who was born in the first quarter of the Kaliyuga in Bharatam, in Jambudweep, in the bright fortnight of the moon in the month of Virgo under the planet Vaisagha.’

I offer you the sacred gingelly.

I make the offering to the Kshetra.

‘Go to the Ganga, place the offering in the water, take three dips and come back.’

He took three dips. He could not remember much of what the priest had chanted. There were some lines about acquired sins.

When he returned after the bath, there was a new set of people in front of the priest. Tikoo had fixed the rate at two hundred rupees. The decision to perform atmapinda, the posthumous rites for himself was taken after that. He gave him three hundred rupees and the man was happy. He raised his hands chanted something and blessed him.

‘May the stars and the moon bless you. May your knowledge and your worship of God be fruitful. May all your wishes be fulfilled.’

When he looked inside himself he found nothing. The mind was like a begging bowl that had big holes in it. Even if he got something, the vessel could not have held it. He bowed to the priest and stepped on to the street. He bade farewell to Tikoo.

During the day he read the thesis carefully.

The papers were with him when he stepped out in the evening. There would be no point in completing it at this age and getting a doctorate by submitting it somewhere.

Shakespeare wrote a play for the guests who attended the wedding of a British prince. He astounded the viewers with stories of dreams, magic, music and visual tricks.

Some of it had been written representing Caliban as a symbol of protest against colonial domination. Must read it again. Maybe he will have to write a few more pages.

What he had read during his vacation at home was mostly commentaries on the Upanishads. There were some books that he had decided to read once again. No, he was not going to return to Shakespeare. Must read The Brothers Karamazov once again. Armando and Fuentes were waiting too. He had not decided whether to read the Nostradamus that someone had given him.

He got down to the Kedarnath ghat. There he took out the papers from the big cover. They fluttered in the wind. Some sheets escaped from his hands and landed in the water. Then he let go of the remaining pages one by one and they landed on the Ganga. Would they float for a while? He couldn’t see in the darkness. He climbed the steps and walked on.

Some of the lamps that had been floated on the river could be seen sparkling at a distance.

He sat on the lowest step below Sheetala Devi. The wind subsided; the river was becoming calm once again.

The boats had come to the shore.

There were some visitors on the lower steps. After a while they went away one by one. Soon, no one was left.

He went further down. He stood near the wooden pier looking at the river. Someone was talking and when he turned around and looked, he saw a young lady and an elderly woman. The young lady was apparently a foreigner.

They came towards him.

In the dim light Sudhakaran recognised the older woman. Sumita Nagpal. He had no doubt. Time had not made much of a change on her face. He did not allow his surprise to be seen on his face.

She looked at him and said in Hindi, ‘Dekho ji, would it be possible to get a lamp?’

He went up the steps. He forgot the doctor’s advice that he should climb steps slowly.

From the market he got a lamp, oil and the wick. Then he bought two more lamps and a match box.

When he got back and offered the lamps to the visitors they were pleased and surprised. ‘Many thanks,’ the American woman said.

He lit both the lamps with shaking hands. He stood by to light them again should they get blown out before being placed on the water. They went forward and set the lamps adrift.

What happened to Salil Ghosh?

What has now happened to the surname of Nelson?

He wanted to know. But he decided not to introduce himself. Their lamps were moving on the water. The little waves swung them from side to side and carried them to some distance. Then they overturned.

Sumitha Nelson opened her purse, ‘How much did you pay for the lamps?’

‘It doesn’t matter. It was my pleasure.’

She smiled by way of thanks.

The American woman said, ‘Do you know? She is a great scholar in Indian philosophy. She has written a book about Kashi.’

Sudhakaran responded by folding his palms.

‘Thank you very much.’

If they asked who he was, what should he say?

But that did not happen. They didn’t ask.

They went to the top of the steps.

He was left all alone on the Dashashwamedh ghat.

Ganga was peaceful. Very small waves. The river seemed to have heaved a sigh and settled down to rest.

The bathing ghats were asleep.

This town, that is a garden of joy and a crematorium has once again become a wayside stop.

Tomorrow, the journey will begin again. To another wayside stop.

These are excerpts from Varanasi written by M T Vasudevan, translated by N Gopalakrishnan and published by Orient Blackswan. Republished here with permission from the publisher.
M T Vasudevan is an author, screenplay writer and film director. He is the recipient of Kerala Sahitya Akademi Award, and the J.C. Daniel Award for lifetime achievement in Malayalam cinema.