How did India aspire to become a secular country? Given our colonial past, we derive many of our laws and institutions from England. We have a parliamentary democracy with a Westminster model of government.

Written by Abhinav Chandrachud, Republic of Religion: The Rise and Fall of Colonial Secularism in India, reasons that the secular structure of the colonial state in India was imposed by a colonial power on a conquered people. It was an unnatural foreign imposition, perhaps one that was bound, in some measure, to come apart once colonialism ended, given colonial secularism's dubious origins.

The following is an excerpt from the chapter "Holy Cow" of the book. 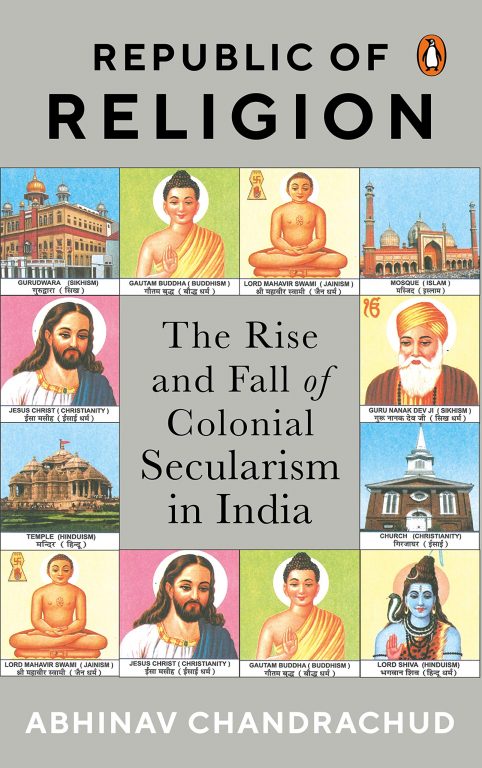 …independent India is less secular than British India was in the sense that while Muslims were allowed to slaughter cows during Bakr Id in the colonial period, they are now barred from doing so in independent India. Cow slaughter in some form is now banned in a majority of states in India.1 Faced with a political crisis in 1966–67, Prime Minister Indira Gandhi, Nehru’s daughter, instructed states that had not yet enacted cow slaughter bans to remember their constitutional obligations to do so.2 This was despite the secular ideals of leaders like Mahatma Gandhi and Nehru, who did not believe in enacting legislation against cow slaughter, though they believed in protecting the cow. In 1971, Indira Gandhi’s Congress adopted, as its electoral symbol, the image of a cow suckling its calf.3 Ironically, in 1976, it was her government that inserted the word ‘secular’ into the preamble to the Constitution.

Arguments in favour of cow protection, whether in the Constituent Assembly or in the Supreme Court, were rooted in economics over religion. The overarching proposition was that cows are useful to India’s predominantly agricultural economy, and a law that prohibits their slaughter benefits the country. Bans on cow slaughter were considered not to violate the religious rights of Muslims because cow slaughter was considered to be optional in Islam. However, these arguments are tenuous for the following reasons.4

Firstly, should the right to free exercise of religion be determined only on the basis of what is obligatory in a religion? For instance, there may be no written obligation in Hinduism for a Hindu to visit a temple during the festival of Diwali. Many Hindus do not, in fact, visit temples during Diwali. Could a law that bans Hindus from visiting temples during Diwali be sustained on the grounds that visiting temples during Diwali is not mandatory in Hinduism? Religious rituals are often not driven by compulsion as much as they are by faith.5 As one scholar has noted, ‘the sign of the Cross in Holy Baptism and the ring in Holy Matrimony are not enjoined in the Bible’, but any attempt to prohibit them would be considered in ‘countries of the Christian tradition’ as an interference with the freedom of religion.6 Further, the Supreme Court has not paid much attention to the fact that the restriction on cow slaughter was not observed by many Hindus during the colonial period and earlier—as Gandhi noted, Hindus were themselves responsible for selling cows for slaughter, lower-caste Hindus consumed the flesh of dead cows,7 and even upper-caste Hindus consumed beef under medical advice. Seen in this light, Hinduism’s reverence towards the cow itself appears to be optional.8 Even in the Constituent Assembly, the demand for Article 48 came primarily from Hindi-speaking north Indian Hindu members of the assembly.

Secondly, the law presumes that cows that are not slaughtered will be used in agriculture—to yield milk, as draught animals, for breeding, or for manure. However, this fails to take into account that cows that are slaughtered in a state might not, if they are not slaughtered, be used in agriculture at all. There is nothing which compels a person to use his cattle for the purposes of agriculture. A cattle owner may decide to abandon his animals once they have become useless (i.e. once their only usefulness is in providing manure) since the cost of maintaining them may exceed the money obtained from the manure produced by them.

Thirdly, most cow protection laws that have been tested before the Supreme Court do not ban the interstate sale of cattle for the purpose of slaughter. In fact, in Maharashtra, where such a ban was sought to be imposed, the Bombay High Court held that the government could not prohibit the sale of a cow from Maharashtra to outside the state for the purpose of slaughter. In other words, if a cow is not slaughtered in Maharashtra, it may still be slaughtered in a state where cow slaughter is permitted, and it will not therefore be used in agriculture at all. Even so, the ban on cow slaughter in Maharashtra was upheld on the grounds that cows are useful for agriculture in Maharashtra.

Fourthly, there are other animals that are useful to India’s agricultural economy as well—animals like camels, mules, horses, sheep and goats, which serve as beasts of burden and provide milk and manure. Why is it that despite their usefulness in agriculture these animals are not protected by the law? In short, the sense one gets is that an economic argument is often made in support of banning cow slaughter to lend a respectable secular veneer to an argument that is otherwise religious, i.e. that cow slaughter should be banned in India since cows are sacred to Hinduism.

Fifthly, though the fact that India is primarily an agricultural country is regarded by the Supreme Court as a justification for the ban on cow slaughter, agriculture now contributes around 17.1 per cent to India’s GDP, while the services sector contributes 53.9 per cent.9 Further, according to statistics gathered by the Food and Agriculture Organization of the United Nations, India consistently produces and consumes more beef and buffalo meat than mutton, pork, or poultry.10 However, agriculture remains a large source of employment in India.11

1. See, ‘States Where Cow Slaughter Is Banned So Far, and States Where It Isn’t’, News18, 26 May 2017, available at: https://www.news18.com/news/india/states-where-cow-slaughter-is-banned-so-far-andstates-where-it-isnt-1413425.html (last visited 10 November 2018); Saptarishi Dutta, ‘Where You Can and Can’t Eat Beef in India’, Wall Street Journal, 6 August 2015, available at: https://blogs.wsj.com/indiarealtime/2015/08/06/where-you-can-and-cant-eat-beefin-india/ (last visited 10 November 2018); Sen, Articles of Faith, p. 129. Between 1949 and 1955, nine out of fourteen states in India enacted laws banning cow slaughter. De, A People’s Constitution, p. 145.
2. Ian Copland, ‘History in Flux: Indira Gandhi and the “Great All-Party Campaign” for the Protection of the Cow, 1966–8’, Journal of Contemporary History, vol. 49(2), pp. 410–39, at p. 428 (2014). According to Granville Austin, the ban on cow slaughter was extended to most of India during her tenure as Prime Minister. Granville Austin, Working a Democratic Constitution: A History of the Indian Experience (New Delhi: Oxford University Press, 1999), p. 399, note 18. This was done during the Emergency.
3. McLane, Indian Nationalism and the Early Congress, p. 275; Copland, ibid., p. 435.
4. See further, Granville Austin, The Indian Constitution: Cornerstone of a Nation (New Delhi: Oxford University Press, 2015 reprint), p. 104 (Austin wrote that 'Article 48 shows that Hindu sentiment predominated in the Constituent Assembly'); Shraddha Chigateri, 'Negotiating the "Sacred" Cow: Cow Slaughter and the Regulation of Difference in India', in, Monica Mookherjee (ed.), Democracy, Religious Pluralism and the Liberal Dilemma of Accommodation (London: Springer, 2011) pp. 137-59.
5. Of course, one might argue that the Supreme Court was balancing rights in the cow protection cases. Slaughtering a cow during Bakr Id is optional in Islam, but slaughtering cows is against Hinduism. So the court balanced the rights of each group, and held that a ban on cow slaughter was justifiable. However, a similar argument can be made in the temple ban example as well Visiting temples during Diwali is not mandatory in Hinduism. Worshipping 'false' gods is prohibited in Islam. Accordingly, would a court balance rights and uphold a ban on visiting temples during Diwali?
6. Derrett, 'Case Comment', p. 224, note 8.
7. See further, Kancha Ilaiah, 'Beef, BJP and Food Rights of People', Economic and Political Weekly, 15 June 1996, available at: https://www.epwin/node/149991/pdf (last visited 10 November 2018); De, A People's Constitution, p. 166-47.
8. See further, Baxi, 'The little Done, The Vast Undone', p. 349.
9. 'Contribution of various sectors to GDP', Press Information Bureau, 14 December 2018, available at: ht tp://pi b. nici n/newsite/Pri ntRelease. aspx?relid=186413 (last visited 19 May 2019). See further, 'Livestock Sector Brief. India', Food and Agriculture Organization of the United Nations, July 2005, available at: http://www.fao.org/ag/againfo/resources/en/publications/sector_briefs/lsb_IND.pdf (last visited 10 November 2018), p. 1.
10. Ibid., p. 7, 10. In 2002, India produced 29,12,000 metric tonnes of beef and buffalo meat, 7,03,000 metric tonnes of mutton, 487 metric tonnes of pork, and 14,60,000 metric tonnes of poultry. Similarly, in 2002, Indians consumed 26,07,000 metric tonnes of beef and buffalo meat, 6,98,000 metric tonnes of mutton, 6,13,000 metric tonnes of pork, and 14,00,000 metric tonnes of poultry.
11. See, Sushruth Sunder, ‘India Economic Survey 2018’, Financial Express, 29 January 2018, available at: https://www.financialexpress.com/budget/indiaeconomic-survey-2018-for-farmers-agriculturegdp-msp/1034266/ (last visited 19 May 2019).

This is an excerpt from Republic of Religion: The Rise and Fall of Colonial Secularism in India written by Abhinav Chandrachud and published by Penguin. Republished here with permission from the publisher.
Abhinav Chandrachud is an advocate who practises at the Bombay High Court. He is also the author of Republic of Rhetoric: Free Speech and the Constitution of India (2017) and Supreme Whispers: Conversations with Judges of the Supreme Court of India 1980-1989<.em> (2018).