A number of social movements have come together under the banner of Jan Sarokar with other civil society organisations to organise a Janata Parliament to discuss the Covid related policy issues and concerns. The Janata Parliament is scheduled to be held from 16th to 21st August with two sessions each day. The inauguration will happen on 16th August at 11:00 am. Justice A. P. Shah, Syeda Hameed, Jignesh Mevani and Soni Sori will be speaking at the inauguration.

The concept note issued by the organizers highlights the absence of any parliamentary proceedings since March 2020 even as many controversial policy decisions have been made by the government. It states that, “With Parliament not being in session, the absence of the most important platform to seek representative accountability during the Covid pandemic has created a crisis of its own.” In this backdrop, the objective behind people’s parliament is to set an agenda for what should be discussed whenever the Parliament is convened. It also hopes to make a point that it would not have been difficult to convene a Parliament session, had the government intended to do so. The themes for discussion in the Janata Parliament include education, economy, agriculture and food security and nutrition among others.

The schedule of the Janata Parliament: 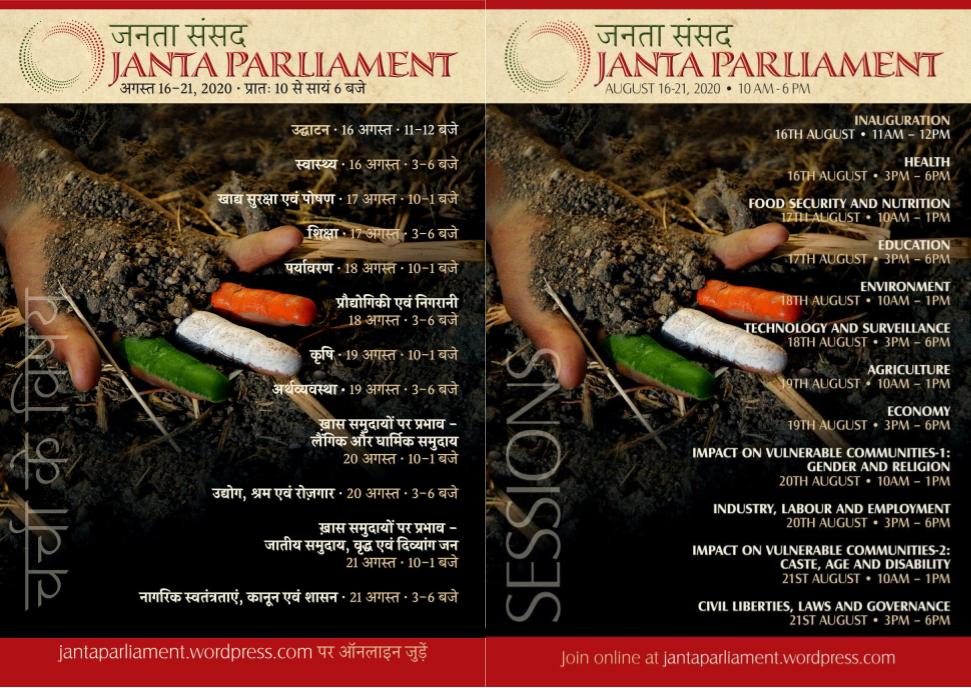 Why a Janata Parliament:

During five months of India and the world facing a pandemic, Parliament has not been convened at all, physically or online. Most of its committees also did not function for the first months of the lockdown.

In a “Parliamentary Democracy” a functional and healthy Parliament, is the fulcrum of its institutional structure. It is the central pillar of a ‘democratic’ policy making framework, and along with public monitoring, it is the platform through which the countervailing balance of power between the different wings of government can be maintained. This is particularly important for ensuring the accountability of the executive to the people. To not have a functional Parliament at this time, is to lose the contribution of one of the most important institutions of democracy, in ensuring the better involvement of citizens and different institutions of the state, when facing a crisis like the current pandemic.

The concept of a legislature to oversee and pass the directives that executive power should implement, has a very long history. Etymologically speaking, ‘parliament’ is derived from a term that comes from Anglo-Norman. The word traces its roots to the 11th century Old French parlement, from parler, meaning "to talk". The meaning evolved over time – originally referred to a negotiation through various kinds of deliberative or judicial groups. It is now understood to be a legislative body of government and one of the important institutions where the voters can expect deliberation, transparency and attention to their concerns in discussions over a range of issues which will affect them. The multi party representation, combined with the sanctity given to Parliament makes it a space which could help expose and control arbitrariness, faulty decisions, and any potential or possibly illegitimate manipulations by elected leaders.

Increasingly, in modern democracies Parliament has had ascendency over the head of an elected government in making sure the process of governance follows the processes of probity and ethics. In a Parliamentary democracy like India, Parliament is convened to reflect the views of all segments of society, while ensuring the government acts in consonance with the Constitution and the laws enacted under it.

The political concept of a parliament is to set a policy framework and to make the executive accountable in line with the Constitution, the policy framework and the concerns of the people. The non-convening of the Monsoon Session of the Indian Parliament in 2020 in critical times of a national pandemic, is increasing to gigantic proportions the lack of transparency, accountability and public monitoring of the executive. When there is an elected government, that is wary of public consultation, sharing of information or the processes of decision making with its people, the suspicions of mismanagement can be prevented only by exercising and activating the institutional platforms of deliberation based on the principles of transparency and accountability to the people. The decision making in Covid times has largely been cloaked in secrecy and where decisions have been taken top down in a centralized manner.

The public health and lockdown policies have barely been subject to scrutiny even by the highest courts. Even funds like PM cares have been put outside the realm of the RTI, with declarations from the PMO that it will not even be open to CAG scrutiny; thereby making a mockery of election promises, the constitution and democratic processes in one go. Similarly, highly contested and far reaching policy decisions continue to be made by the government in fundamental areas such as Environment Assessment or criminal law reform, for example, at a time when spaces for face to face public deliberation and different legislative bodies have been non-functional. The functioning of state governments have also been affected when laws like the disaster management act and the epidemic act have centralized power and decision making completely against the stream of federal principles.

The non-convening of a parliament has therefore also to be seen in the context of its many arbitrary decisions that have left principles of constitutional democracy severely wounded and maimed. Democratic rights to opinions, to protecting weak and vulnerable parts of society and the asking of questions, have all come under the banal label of “anti-national” and “acting against the state” and are being subject to anti-terror laws. The Parliament must be convened to allow questioning by not only the opposition, but also of the government and the opposition, by the voter regarding their irresponsibility in allowing democratic institutions to slide into arbitrariness, inactivity and ineffectiveness in a manner and in proportions not witnessed before.

Under such circumstances, people and their organizations have no choice but to attempt to convene an alternative platform that involves citizens, civil society organizations, independent experts and political parties in a deliberative framework to discuss the status of each area of importance in COVID times, the challenges being faced and the range of potential policy alternatives to overcome these challenges. Given the lack of parliamentary oversight, such a platform would atleast allow in their groups to place on record what they have been through over the last few months, how much Government policies benefitted them, what they have suffered and what their thoughts are about the future. It is clear that in such a period that face to face interactions are very limited although online communication is an incomplete form of deliberation and it is by its nature exclusive. Many civil society organizations have attempted at hybrid means of communication and deliberation so that the views of people without access to digital mediums can have their views reflected on online platforms as well.

Many civil society organizations and social movements have come together in the past to hold Jan Sansads where political party leaders have been invited to listen to peoples’ concerns and carry those views to Parliament. In today’s context, it has been decided by a number of social movements coming together under the banner of Jan Sarokar along with other civil society organizations to organize a week long 11 session online Janta Parliament. The details of the session are attached. It is hoped that this platform will be one amongst many that will force a reluctant government to reopen the institutions of democratic deliberations and ensure that decisions of the executive are based on greater public consultations and subject to much greater public probity and monitoring, than is the case today. It is also hoped that several important ideas and efforts of people across India will be expressed in the Janta Parliament, and with the help of members of Parliament and the media will be reflected in the Parliamentary deliberations when they do take place. Eventually the Janta Parliament is seen as one of many potential platforms of participatory and direct democracies- some thing that has the highest level of democratic Legitimacy.

This Janata Parliament will draw some inspiration from the modes of parliamentary debate, but will be far more committed to creating a practical platform where views can be expressed and carried forward and procedures can be evolved in consonance with the challenges of an online civil society led platform.

Objectives of the Janata parliament are: